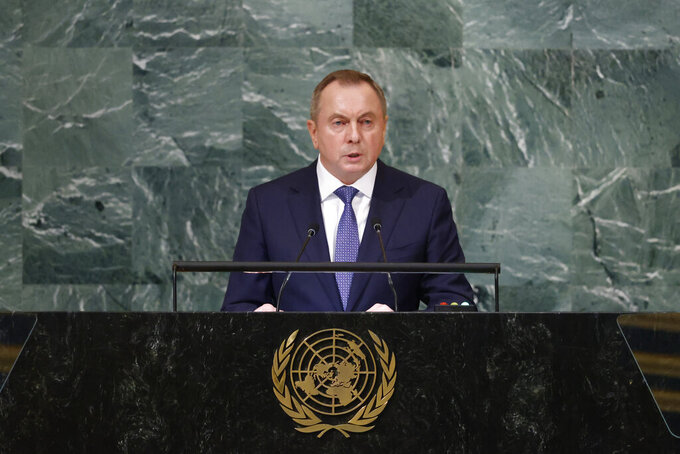 UNITED NATIONS (AP) — In the eyes of Belarus' foreign minister, the root cause of the war in Ukraine dates back 30 years ago to the end of the Cold War.

At that time, there was no official treaty — just a “gentlemen’s agreement” that opened a path for the West to secure its domination, in part through the expansion of the North Atlantic Treaty Alliance, Vladimir Makei told the U.N. General Assembly on Saturday.

“With its drive to enlarge NATO, the West has essentially trampled upon the indivisibility of security, the vital principle, which states that one party must not seek to achieve its own security at the expense of other parties,” he said.

Makei said NATO and the West, in their quest to expand eastward, “overlooked the legitimate security interests of both Russia and Belarus." He described NATO’s involvement in what he called “illegal wars” in Yugoslavia, Iraq, Libya and Syria, “in addition to the Alliance’s attempts to encroach on some historical Eastern Slavic and adjacent lands.”

“Therefore,” he claimed, “it is the collective West that should fully bear the responsibility for the ongoing bloodshed in Ukraine.”

Makei’s arguments unsurprisingly mirror those made by Russia, an ally of Belarus. Russian President Vladimir Putin has described NATO’s expansion to Russia’s borders as the top security threat to his country. When he first sent troops into Ukraine on Feb. 24, he cited increasingly close military ties between Kyiv and the West as a key reason behind his action.

Belarus’ authoritarian president, Alexander Lukashenko, has tied himself to Putin, which dissident Sviatlana Tsikhanouskaya attributes to a mutual understanding between the two leaders.

Lukashenko has to support Russia’s invasion of Ukraine, she told The Associated Press, because Putin supported him after mass protests against the official 2020 election results that gave Lukashenko a sixth term with 80% of the vote. Many Belarusians and international observers denounced the results as a sham, believing Tsikhanouskaya had won.

As long as Putin is in power, she told the AP on the sidelines of the U.N. General Assembly, there will be constant security threats to Ukraine — and to Belarus’ western border.

But to Makei, it is the power-hungry West that is the problem.

“Most other countries ... want to create a polycentric or a multipolar world, with no single center of control, in which no one imposes its visions, interests and values on others,” he said on Saturday. “The West dominated the world for the past five centuries. Hence, it believes that it can go on with this kind of history indefinitely.”

He ridiculed the economic sanctions imposed by Western allies against Russia as ineffective while also pointing to the harm he says they have instead caused other countries, all over the globe, by driving up energy prices and food costs.

Makei closed his remarks by offering up Belarus to help broker a ceasefire agreement and a comprehensive strategic peace settlement between Russia and Ukraine.

“There is no alternative to talks,” he said.