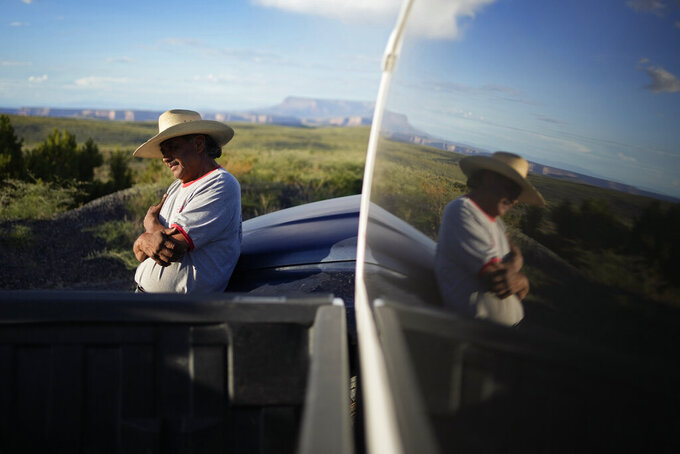 John Locher, ASSOCIATED PRESS
Rancher Clay Bravo leans against his truck on the Hualapai reservation Tuesday, Aug. 16, 2022, in northwestern Arizona. Despite the Colorado River coursing more than 100 miles through Hualapai land, the tribe can't draw from it. Bravo said the tribe should wait on a settlement, negotiate a better deal and develop groundwater resources at the same time.(AP Photo/John Locher)

PEACH SPRINGS, Ariz. (AP) — Garnett Querta slips on his work gloves as he shifts the big rig he’s driving into park. Within seconds, he unrolls a fire hose and opens a hydrant, sending water flowing into one of the plastic tanks on the truck’s flat bed.

His timer is set for 5 minutes, 20 seconds — when the tank will be full and he’ll turn to the second one.

The water pulled from the ground here will be piped dozens of miles across rugged landscape to serve the roughly 700,000 tourists a year who visit the Grand Canyon on the Hualapai reservation in northwestern Arizona — an operation that is the tribe's main source of revenue.

Despite the Colorado River bordering more than 100 miles of Hualapai land in the canyon, the tribe can't draw from it. Native American tribes in the Colorado River basin have inherent rights to the water, but the amount and access for a dozen tribes hasn't been fully resolved, not for decades.

The 1922 Colorado River Compact that divided the water among states didn't include a share for tribes. Now that the river is shrinking because of overuse, drought and human-caused climate change, tribes want the federal government to ensure their interests are protected.

EDITOR’S NOTE: This is part of a collaborative series on the Colorado River as the 100th anniversary of the historic Colorado River Compact approaches. The Associated Press, The Colorado Sun, The Albuquerque Journal, The Salt Lake Tribune, The Arizona Daily Star and The Nevada Independent are working together to explore the pressures on the river in 2022.

A water settlement pending in Congress would give the Hualapai Tribe the right to draw river water, plus $180 million to pipe it to tribal communities and the main tourist center at Grand Canyon West.

“It was the best of a bad deal,” said Phil Wisely, the tribe’s public services director. “And the thing is, I don’t think we could get a better deal, especially now.”

The Colorado River can no longer can meet the needs of the 40 million people and $15 billion agriculture industry that depend on it. The U.S. Bureau of Reclamation recently announced that Arizona, Nevada and Mexico would see deeper cuts to their water supply in 2023. The agency also is asking seven Western states to find a way to conserve more.

The 29 tribes in the Colorado River basin are in fact among the river's most senior water rights holders, a determination often tied to the date the federal government established a reservation. Tribal water rights — once they’re fully resolved — could add up to about one-quarter of the river’s historic flow, according to the Water & Tribes Initiative.

Unlike other water users, tribes don’t lose access to water when they don't use it. A 1908 U.S. Supreme Court decision known as the Winters Doctrine says tribes have the right to enough water to establish a permanent homeland. Often, tribes give up potentially huge water claims in exchange for an assured supply and federal funding to deliver it.

To the northeast of Hualapai, the Ute Indian Tribe has Colorado River tributaries flowing on its reservation east of Salt Lake City. While the tribe has secured some rights, not everyone agrees on how much more it should receive, delaying a settlement for decades.

Ute Indian Tribe leaders say they’re tired of reiterating that the federal government needs to protect tribal interests, a duty laid out in treaties and other acts.

“Until you start to deal with the inequities or the injustice, you can never really have any momentum going forward,” said Shaun Chapoose, chairman of the Ute Business Committee.

“You’re not resolving that. And they are in a position to do that, they are the federal government.”

The situation of both the Hualapai and Ute Indian Tribe highlights the frustration of Native American leaders across the basin that although their rights may not be quantified, they are real.

Other tribes that have secured water rights have pitched in to help their neighbors amid the prolonged drought by conserving water in key reservoirs along the Colorado River. Some lease or exchange water, and use it to sustain the environment, sometimes creating revenue for themselves.

But Jay Weiner, who represents tribes in water settlements, said it would be unjust to continue to rely heavily on tribes when they haven't had access to the water as long as states in the basin.

“The tribes have already front-loaded and sacrificed by the fact that the basin has been able to use huge amounts of water that tribes have rights to over the past 100 years,” Weiner said.

In a statement to The Associated Press, the Interior Department did not say how tribal water rights, which are federal rights, would be protected as the river's flow decreases. It said it is working with tribes that are affected by drought.

Querta’s job is a grind but he’s well-suited for it — analytical, quick and goal-oriented. He takes meticulous notes on water levels and quality as he fills the tanks that ensure tourists at Grand Canyon West have water.

The truck takes a beating on the gravel and dirt road on multiple round trips of more than 30 miles most days. The side mirrors and back windows that rattled loose are held together by red duct tape. Querta keeps tools on hand for minor repairs. Major ones or illness can put him out of commission.

He was out for two weeks because of COVID-19 last year and had no replacement.

“I didn’t mind because I didn’t want anybody to mess up my truck or my tanks,” said Querta. “I take care of this truck like it’s mine.”

Once he's filled the tanks on the truck bed, the water is sent through a pipeline from just outside of Peach Springs to Grand Canyon West. The tourist center is crucial. Revenue from it funds tribal programs for the elderly, public works, the cultural center, scholarships and other social services. The main attraction is the Grand Canyon Skywalk — a horseshoe-shaped glass bridge that gives tourists a view of the Colorado River 4,000 feet below.

There is not a drop to spare at Grand Canyon West. A restaurant that overlooks the Grand Canyon has waterless urinals in the restrooms and faucets with sensors. Customers are served bottled water and food in disposable containers with plastic utensils, cutting out most of dish washing.

Even if the Hualapai eventually get water from the Colorado River, those practices will stay in place, said operations manager Alvaro Cobia-Ruesga.

“We see what’s going on, we have to conserve water for our future,” he said.

The tribe has long planned to expand Grand Canyon West with a store, fire and police station, housing and elementary school to serve tribal members who ride a shuttle up to five hours round trip daily from Peach Springs and surrounding communities to their jobs there.

But without a secure source of water for Grand Canyon West, it won’t happen, said tribal Chairman Damon Clarke. Under the settlement pending in Congress, the tribe would be responsible for building out the infrastructure to deliver water.

“One of the biggest things with our settlement is hope for the future and getting this not for us at this time but for the generations ahead,” Clarke said.

Part of the reason the Hualapai Tribe did not prioritize discussions on water rights long ago is because tribal members believed that water came with their land, said Rory Majenty, board chairman of the Grand Canyon Resort Corp. that oversees Grand Canyon West.

“We took things for granted,” he said. “Like you knew you were going to eat, you knew the sun was going to come up. Tomorrow is another day.”

The settlement has its critics, including Hualapai rancher Clay Bravo. He said the tribe should wait, negotiate a better deal and develop groundwater resources at the same time. He's not satisfied with a lower priority water right that he equates to crumbs, given the Hualapai Tribe has been on the land since time immemorial.

“How can we run a race and come in first and get the fourth-place trophy?” Bravo said, leaning against a pickup truck on a rocky road overlooking an old water well that was contaminated with radium.

Even with secure water rights, tribes can't always fully put the water to use because they lack infrastructure. A pipeline eventually will reach the southwestern portion of the Jicarilla Apache Nation in New Mexico through another tribe's water settlement to boost economic development in the region. Jicarilla Apache has leased water it already has access to for energy production, recreation and conservation, and to benefit threatened and endangered fish. Tribes in the Phoenix area have leased water to nearby cities.

The Colorado River Indian Tribes, whose reservation sits along the river bordering Arizona and California, doesn't have the legal authority to lease its water, though a bill is pending in Congress to authorize it.

The Ute Indian Tribe wants that same ability. The tribe asserts rights to 550,000 acre-feet. (An acre-foot is enough water to serve two to three U.S. households annually). A 30-year-old settlement recognizes about half of that.

“Utah’s position is that’s the number we’re comfortable with, and we think that does more than enough to satisfy the claims of the Utes,” said Utah deputy state engineer Jared Manning.

But the tribe hasn’t ratified the settlement as it was presented in Congress. The Utes have sued in federal court over access to water. A judge ruled in one case last year that the tribe waited too long to bring some of its claims against the federal government and Utah, but the case isn't over.

Daniel McCool, professor emeritus at the University of Utah, said the larger question is whether the Ute Indian Tribe has been treated justly and whether funding for water diversions have been on par with non-Native American interests.

“There’s a reason why the tribe doesn’t have much water and why almost all the water in the region is being used by white people,” said McCool, who studies tribal water rights. “Look at who got the money, the Central Utah Project. Who got the water? Ask yourself that and ask, ‘does this look fair to you?’”

It’s a question tribal members have posed for decades, whether the first inhabitants of what’s now the U.S. should have anything but the oldest, most secure water rights. Inevitably, others will lose water they’ve grown accustomed to using as tribes gain access to it.

“People have been taking our water. Are they taking it legally or illegally?” Majenty said.

“The argument from the other side is it’s capitalism, free enterprise. That’s where they got us. Ownership is where it’s at. Until you have a piece of paper, it’s not yours.”

___ Fonseca covers Indigenous communities on the AP's Race and Ethnicity team. Follow her on Twitter at http://twitter.com/FonsecaAP

The Associated Press receives support from the Walton Family Foundation for coverage of water and environmental policy. The AP is solely responsible for all content. For all of AP’s environmental coverage, visit https://apnews.com/hub/climate-and-environment