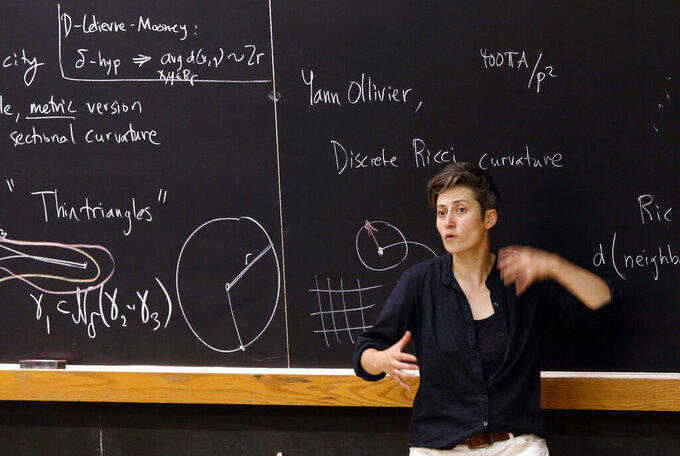 Bill Sikes, ASSOCIATED PRESS
FILE - In this Aug. 7, 2017 photo, mathematics professor Moon Duchin speaks to attendees during a conference at Tufts University in Medford, Mass. When Virginians voted last year to create a commission to draw the state’s political districts, many hoped to head off the partisanship that has marred previous redistricting efforts. Duchin, who specializes in geometry, has been immersed in redistricting problems since 2016, when she taught a class on voting theory. (AP Photo/Bill Sikes)

When Virginians voted last year to create a commission to draw the state’s political districts, many hoped to head off the partisanship that has marred previous redistricting efforts.

Gerrymandering — rigging maps to favor a political party or candidate — has long been used by incumbents in Virginia and elsewhere to hold onto or expand political power. Both parties agree it damages the integrity of elections, but the complexities of map drawing make it difficult to prevent.

Now Virginia’s commission is considering an offer of help from someone accustomed to solving complex problems: a mathematician.

Moon Duchin, a math professor at Tufts University who specializes in geometry, has been immersed in redistricting problems since 2016, when she taught a class on voting theory. Duchin figured the field of geometry ought to be able to help. She soon founded the MGGG Redistricting Lab, an effort to apply data science to redistricting.

The lab, which grew out of an informal research collective called the Metric Geometry and Gerrymandering Group, has helped refine techniques that construct representative samples of the universe of valid redistricting maps for a given jurisdiction. When human-generated maps deviate far from statistical norms, it can be a dead giveaway of gerrymandering or some other agenda, Duchin and other mathematicians say.

In 2018, Pennsylvania Gov. Tom Wolf (D) hired Duchin to evaluate the fairness of a congressional map revised by legislators, after that state’s Supreme Court ruled that a previous map was an illegal gerrymander. Duchin found the new map’s “bias in favor of Republicans (was) extremely unlikely to have come about by chance,” she later wrote, putting the odds at roughly 0.1 percent.

In 2019, Duchin’s lab organized a group of mathematical and legal experts to file an amicus brief to the U.S. Supreme Court about the new mathematical method. They touted what they said was an emerging scientific consensus that computer sampling techniques can help distinguish maps drawn to conform to aboveboard and transparent goals — such as creating compact districts and keeping communities together — from maps created with hidden agendas like partisan gerrymandering.

In that landmark case, Rucho v. Common Cause, the court ultimately ruled that federal judges do not have the power to stop politicians from drawing electoral districts to preserve or expand their party’s power.

Last month, she offered her services to Virginia’s redistricting commission. The bipartisan commission, which has an equal number of Democratic and Republican members, has faced traditional partisan pressures. The members voted 10 to 4 this summer to hire two sets of lawyers — one Democratic and one Republican — to make sure neither party gets an edge. Then they voted to hire two different map drawers as well.

The Democratic lawyer, Gerald Hebert, told commissioners at their Aug. 23 meeting that he approached Duchin’s team to be his map drawer. She declined, saying she didn’t want to work for one side or the other. So Hebert selected another map drawer and proposed that the commission hire Duchin to consult for both sides, perhaps to help evaluate their proposed maps.

“I am thrilled that Ms. Duchin is on the call,” said Harris, one of the commission’s nonlegislative members, after Duchin was introduced by phone at the meeting. “The work that I have looked at that her lab does really tries to strip out the partisan nature that can be so prevalent in any redistricting process.”

It remained unclear what others on the commission thought of the idea. A Republican-side lawyer, Bryan Tyson, said at the meeting that he needed more time to consider it.

“I could see some value depending on what it is,” he said. “But I want to understand what are kind of the contours of it.”

The commissioners have pledged to avoid speaking about the redistricting process outside of public meetings, and several members either declined to comment or did not return messages from The Washington Post. Harris declined to comment, except to say that she expected the decision of whether to hire Duchin to be discussed at a coming meeting.

Virginians overwhelmingly approved a constitutional amendment last fall to create the commission rather than continuing to allow the General Assembly to draw the state’s political districts. The process unfolds every 10 years, based on data from the U.S. census.

The commission has 45 days to submit new maps to the General Assembly. If the commission fails to agree, or if the legislature rejects the plan, the Supreme Court of Virginia would create the new maps.

The commission’s creation came after years of court battles over gerrymandering. The maps in place now were created by a special master after federal courts repeatedly found that maps by Virginia Republicans unconstitutionally packed Black voters into a handful of districts.

A 2018 white paper by Duchin’s lab found that a plan for the House of Delegates put forward by Democrats similarly diluted the Black vote.

Duchin said in an interview that she wants no part of any partisan agenda. Rather, she seeks out work “where you can kind of call balls and strikes,” she said.

“I’m a mathematician who uses open-source algorithms, open-source computer programs,” she said. “Meaning not only is there a body of literature behind it that was developed outside of the political context, but also all the algorithmic stuff we do is completely transparent, because anybody can go look at the code and understand how it works.”

A technique Duchin relies on, which she and others have called “the method of ensembles,” works by randomly creating tens of thousands of maps drawn according to whatever priorities the computer is given. The result is a collection — or ensemble — of thousands of maps that mirror the much larger number (often trillions upon trillions) of maps that could be drawn in the same jurisdiction under those priorities.

The ensembles can help solve a problem that has long bedeviled map drawers: a lack of neutral benchmark maps, Duchin said.

“You’ll see people arguing, for instance, about whether if you did party-blind redistricting, would you get an outcome that’s proportional to the vote? Is that kind of the state of nature?” she said. “People have been fighting about that for at least many decades, if not longer.”

In recent years, and with the help of refinements by Duchin’s lab, mathematicians have learned to harness computing power to create such benchmarks.

“There are fast and efficient algorithms that build you a lot of plans,” Duchin said. “Not only are they numerous, but you can explain how they’re distributed in the world of possibilities. That’s new, and it’s kind of exciting.”

Many people approach redistricting with an intuitive sense that a state should elect representatives of each party in proportion to that party’s voters. Under this concept, called proportionality, where a party has 40 percent of voters, it should get 4 out of 10 political representatives.

But mathematical research shows that because of political geography and demographic patterns — how densely or spread-out voters for different parties are, for instance — things don’t necessarily work out that way naturally. Duchin says getting rid of gerrymandering does not mean getting rid of the partisan advantages that geography and demographics create; it means stopping people from intentionally orchestrating partisan advantage.

And although Duchin advocates computing power as a potentially game-changing tool, she doesn’t propose taking humans out of the process.

“In all the different states, as we approach redistricting now and into the future, we need to keep on having these debates about what principles we want embodied in our maps,” she said. “Different states will come to different ideas about local fairness, about what fairness looks like there. I hope that they’ll use techniques like this to help them get closer to those ideals.”