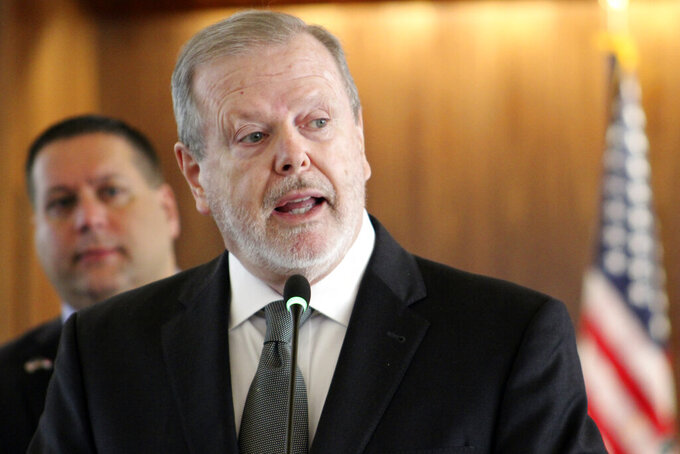 RALEIGH, N.C. (AP) — North Carolina government's most powerful Republican elected official threw his weight fully behind Medicaid expansion Wednesday, raising the stakes for an issue lingering in state politics for a decade that could result in hundreds of thousands of low-income adults getting insured.

Senate leader Phil Berger was a longtime opponent of accepting federal funds through the 2010 Affordable Care Act to cover people that make too much money to qualify for traditional Medicaid, but too little to qualify for subsidized private plans. Opposition by Republicans has left North Carolina one of dozen states that have not accepted the match.

Berger revealed last fall he was willing to consider expanding Medicaid as part of budget negotiations. Earlier this week, Senate Republicans revealed they were considering seriously a package of health care access and insurance changes including expansion, which was disclosed Wednesday and heard in a Senate committee. A committee vote was expected Thursday.

“If there’s a person in the state of North Carolina that has spoken out against Medicaid expansion more than I have, I’d like to meet that person," Berger said at a news conference, but now, ”I think (expansion) is the right thing for us to do.”

Even if the measure clears the Senate, odds for full passage appear long before this year’s budget-adjustment session ends around July 1. House Speaker Tim Moore said there is not the time to negotiate such heavy legislation before then, and GOP colleagues in the chamber are not anxious to address it now. A House-Senate study committee looking at expansion and health care access also has not made recommendations.

Expansion has “been one of the most contentious issues for years,” Moore told reporters later Wednesday. “I don't see an appetite for it right now.”

Berger said the Senate bill contains several provisions the study committee likely would have recommended anyway, and passing the measure will give the House “something else to chew on.” It's possible lawmakers could reconvene later in the year.

Any final measure would go to Democratic Gov. Roy Cooper, an ardent expansion supporter who is “encouraged to see progress on getting more people covered with health care in North Carolina,” spokesperson Jordan Monaghan wrote in an email.

In his most public, comprehensive explanation to date, Berger described how he changed his mind after attempts to enact market-based insurance and health care reforms fell short.

“Why now? Why this?” Berger asked. “First, we need coverage in North Carolina for the working poor. Second, there is no fiscal risk to the state budget moving forward with this proposal." And the Medicaid program has been overhauled in recent years so that it can handle additional consumers without creating state budget problems, he added.

The expansion proposal would likely cover 500,000 or 600,000 people. While about 2.7 million North Carolina residents are now enrolled in Medicaid, some current consumers whom the state has been required to keep on the rolls during the pandemic would ultimately be covered by expansion.

Berger said he's fairly convinced Congress won't lower the federal government’s 90% share of expenses for expansion enrollees, and the bill cancels the program if that were to happen. The state would pay its share through hospital assessments and get an additional $1.5 billion over two years to treat traditional Medicaid patients — an additional sweetener for North Carolina to join.

"We are not likely to ever get a better deal than we are being offered now,” said Sen. Joyce Krawiec, a Forsyth County Republican, also a former expansion opponent who is helping shepherd the measure.

The bill directs that a work requirement for expansion recipients be developed and presented to federal Medicaid regulators for approval, but its rejection would not cancel expansion. Such mandates in other states have been struck down by courts or blocked by President Joe Biden’s administration.

Long-term prospects for final passage of the Senate package may have more to do with its non-expansion items. They include significant easements to the state's certificate of need laws, which regulate the expansion of health care facilities and equipment purchases, and the authorization of advanced-level nurses to work independently from physicians.

The nursing licensure changes have been sought by the profession's lobbying association. Some senators and the North Carolina Medical Society raised concerns about those provisions in Wednesday's committee meeting, citing patient safety.

Rep. Donny Lambeth, a Forsyth County Republican who with Krawiec leads the study committee and supports expansion, said in a text message Wednesday that it's important that “we pass a clean expansion bill — not one that combines a number of other controversial health policy issues.”

But supporters of the Senate bill said the measure must be comprehensive to ensure enough health care professionals and facilities are available to serve Medicaid patients.

Still, longtime advocates for expansion were ecstatic about the prospects their ultimate goal could soon be achieved.

”I will say that I am very optimistic,” said Erica Palmer Smith, executive director of Care4Carolina, after the news conference.