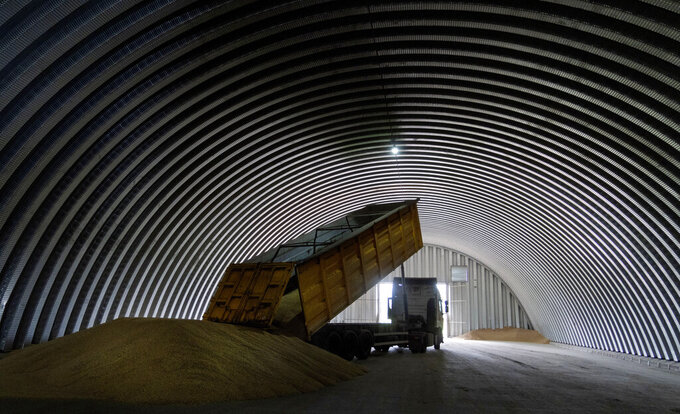 Efrem Lukatsky, ASSOCIATED PRESS
FILE - A dump track unloads grain in a granary in the village of Zghurivka, Ukraine, Aug. 9, 2022. Top Russian and U.N. officials held talks in Switzerland on Friday, Nov. 11, 2022 to try to iron out the extension of a deal allowing Ukrainian grain shipments and Russian food and fertilizer exports, with just over a week left before the wartime agreement meant to ease a global food crisis is set to expire. (AP Photo/Efrem Lukatsky, File)

GENEVA (AP) — Top U.N. officials updated a high-level Russian delegation Friday on progress to facilitate Russia’s exports of food and fertilizer to global markets which have faced obstacles under an expiring wartime deal that has enabled Ukraine to ship over 10 million metric tons of grain from three Black Sea ports.

U.N. humanitarian chief Martin Griffiths and U.N. trade chief Rebeca Grynspan, who has been in charge of the Russian side of the agreement, informed the Russian team led by Deputy Foreign Minister Sergey Vershinin on steps taken to address key Russian issues -- facilitating payments, shipping, insurance for shipments of its grain and fertilizer and getting access to European Union ports, U.N. associate spokeswoman Stephanie Tremblay said in a statement.

The meeting took place ahead of the Nov. 19 expiration of the separate agreements with Russia and Ukraine brokered by the U.N. and Turkey and signed in Istanbul on July 22.

Russia briefly suspended its participation in the deal two weeks ago, alleging a Ukrainian drone attack on its Black Sea fleet in Crimea and Russian authorities have said they are dissatisfied with the implementation of its side of the accord and haven’t yet decided whether to extend the agreement, which was aimed at easing a global food crisis sparked by shortages of grain and fertilizer and escalating prices.

The U.N. also briefed the Russians on “recently issued General Licenses and shipments of fertilizer to developing countries’ destinations and its ongoing engagement with private sector and member states,” Tremblay said.

Russia’s TASS news agency reported on Nov. 1 that Russian fertilizer producer Uralchem-Uralkali was prepared to donate 240,000 ton of fertilizer that has been stuck in EU warehouses and blocked from export for months to needy developing countries, with a first shipment destined for Malawi.

Tremblay said, “It is anticipated that the first shipment of donated fertilizers will depart for Malawi in the coming week.”

“The U.N. remains committed to address the global fertilizer market crunch where farmers, especially smallholder farmers from the developing world are priced out of production due to high inputs costs,” she said. “The world cannot afford to let global fertilizer accessibility problems become a global food shortage.”

The United Nations calls on all parties to expedite the removal of all remaining obstacle to the export and transportation of fertilizer to countries most in need, Tremblay said.

There are no U.S. or European Union sanctions on food and fertilizer shipments, but Russian diplomats have cited problems getting financing and insurance for ships and finding ports where Russian vessels can dock.

“We need to resolve a number of issues related to the well-known part of the so-called grain deal that concerns us,” Kremlin spokesperson Dmitry Peskov told reporters before the meeting. “Here, there is a mutual understanding on the part of our counterparts in the U.N. Therefore, work is underway in this direction.”

Grynspan, who heads the U.N. Conference on Trade and Development, told the Security Council last week that Ukraine and Russia provide around 30% of the world’s exported wheat and barley, 20% of its corn, and over 50% of its sunflower oil. Russia is also the world’s largest exporter of fertilizers, accounting for 15% share of global exports.

The U.N. has warned that an end to the deal could have a ripple effect on food prices, availability and security in many parts of the world.

“Nobody, I think, wants to see that there is a termination of the deal. I think the situation would be really difficult, and the implications would be very serious,” said Boubaker Ben Belhassen, who heads the trade and markets division of the U.N.’s Food and Agricultural Organization.

“In the short term, certainly prices will have to respond, and they will increase, especially, for example, for wheat, for maize, and also for sunflower seed oil,” he told reporters during a U.N. briefing Friday.