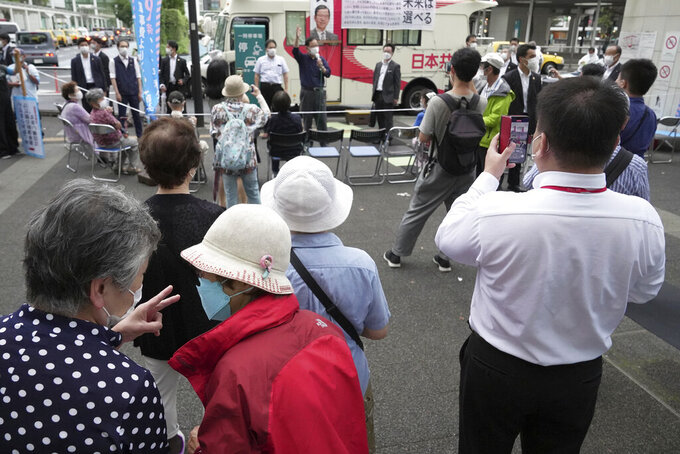 Eugene Hoshiko, ASSOCIATED PRESS
Kazuo Shii, head of the opposition Japanese Communist Party, speaks during a campaign for Sunday's parliamentary elections Tuesday, July 5, 2022, in Kawasaki, near Tokyo. Ahead of Sunday's parliamentary elections, nearly a dozen opposition parties are trying to topple the Liberal Democratic Party, which has ruled, almost without interruption, since the end of World War II. (AP Photo/Eugene Hoshiko)

TOKYO (AP) — Ahead of Sunday's parliamentary elections, nearly a dozen opposition parties are trying to topple the Liberal Democratic Party, which has ruled, almost without interruption, since the end of World War II.

These include a party whose sole platform is a call to boycott public broadcaster NHK, and a party whose trademark is burdock roots and says the vegetable can beat bad guys.

Oh, yeah: There’s also the fractured, bickering main opposition party, which has failed for years to put up a viable candidate for prime minister.

These parties, though wildly different in their policies, share a common trait: They have little chance of upsetting the behemoth LDP, especially as Prime Minister Fumio Kishida maintains stable support ratings and carefully avoids divisive issues ahead of the vote.

The dominance of the LDP is taken for granted here, and Japanese opposition parties, experts say, are more concerned about survival than finding a mutual platform that could viably challenge the LDP. Voters, meanwhile, seem to prefer the stability of the LDP.

A big LDP victory on Sunday, when 545 candidates from 15 parties compete for 124 seats, or half of the 248-seat upper house, means Kishida could rule without interruption until a scheduled election in 2025. Sunday’s votes will not affect the seats for party leaders who mostly belong to the more powerful lower house of Japan’s two-chamber parliament.

Kishida has said winning a combined 70 seats between his LDP and its Buddhist-backed junior coalition partner would be a victory. Recent media polls predict an even stronger result.

That would allow him to work on long-term policy goals, such as national security, his signature but still vague “new capitalism” economic policy, and his party’s long-cherished goal to amend the U.S.-drafted postwar pacifist Constitution. The LDP sees the war in Ukraine and people's worry about regional security as rare incentives to push for the charter change.

The current main opposition party — the Constitutional Democrats — rose from the remnants of one that broke up after its 2009-2012 rule ended in disappointment; its former members are still struggling to regain voter support.

“The situation surrounding the opposition parties is extremely severe,” said Ryosuke Nishida, a Tokyo Institute of Technology professor of sociology and public policy. “We can easily assume that many voters, especially the younger generations, have trouble imagining anyone else but the LDP leading a functional administration.”

Since its 1955 launch, the LDP has fallen from power only twice — in 1993 and 2009, for three years each time. The last time was when the now-defunct opposition Democratic Party of Japan's rule ended in disappointment largely because of its handling of the 2011 earthquake, tsunami and Fukushima nuclear disaster. Business, bureaucracy and society are still deeply connected to the LDP.

The LDP quickly bounced back after the 2012 return of former leader Shinzo Abe; the DPJ splintered and then regrouped into two parties: the Constitutional Democrats and the fourth-ranked Democratic Party for the People.

The current opposition has struggled to gain traction as the Kishida's administration's response to the Ukrainian crisis and the pandemic has been generally accepted by the public.

Much of the public also has indicated approval for Kishida’s plan to drastically reinforce Japan’s military capability and budget to the NATO standard of 2% of GDP over the next five years to address rising tensions with China, North Korea and Russia. There is still some divide, however, as defense and security issues here are sensitive because of Japan's wartime aggression in Asia.

Voters who don't like the LDP have a few choices.

The emerging Reiwa Shinsengumi is led by actor-turned-lawmaker Taro Yamamoto, who is known as Japan’s Bernie Sanders and whose populist and socialist platform has gained support from young liberals. His party and the communists criticize Japan’s defense expansion and call for free education and the elimination of the sales tax.

The Democratic Party for the People calls for salary increases, reactivating nuclear reactors to stabilize energy supply and support a stronger military.

There's also the hawkish Japan Innovation Party, which supports nuclear-weapons sharing with the United States. When party leader Ichiro Matsui showed up to speak recently, however, the crowd was sparse.

“The LDP will stay in power for the time being, but we will spice up the policies," he said. "Japanese politics need an opposition like us.”

The LDP has been somewhat checked on hawkish issues by its junior coalition partner, Komeito, which is reluctant to support an amendment to the war-renouncing Constitution and the possession of enemy-strike capabilities that critics say could breach the country's pacifist charter.

Most opposition parties are unified in pushing for a cut to or elimination of the 10% consumption tax as a temporary measure to relieve rising prices, though none mentions how to make up for the shortfall.

Recent media surveys show Kishida’s popularity is around 50%, still above the 40% when he took office in October. Support for the LDP was 35.6%, compared to just 6% for the Constitutional Democrats, 4.8% for the Innovation Party and 4.6% for the Komeito.

When the prospects for a leadership change are low, opposition parties are less likely to unite and instead try to achieve their policies by cooperating with the rulers, said Yu Uchiyama, a University of Tokyo politics professor.

During the five-month parliamentary session that ended in June, for instance, all of the 61 LDP-proposed legislation actions were endorsed.

“The LDP is a catch-all party that tackles everything,” Kamikubo said. “The main problem is what they do is too little, too late and too old.”

As long as LDP rule continues, experts say that gender equality and diversity issues, such as legalizing same sex marriage and allowing married couples to keep two surnames, will continue to stall because of the party’s small but vocal ultra-rightwing members.

While many voters take LDP leadership for granted, some younger people say they feel their interests are underrepresented because of government policies largely designed for conservative senior citizens, known as “silver democracy.”

Seiji Kuribayashi, a freelance photographer, said that he was still comparing policies about prices, taxes and other issues related to his everyday life among candidates from the LDP, Innovation and Reiwa.

“I think the opposition should build up its strength and be more competitive so the LDP won’t be too complacent about their rule,” he said.