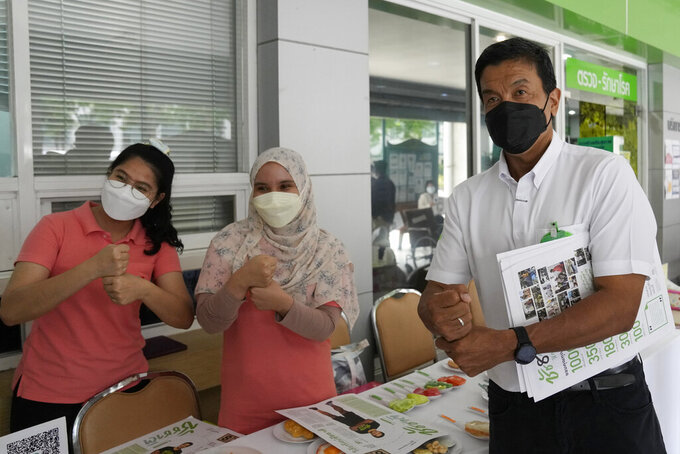 Sakchai Lalit, ASSOCIATED PRESS
Bangkok governor independent candidate Chadchart Sittipunt, right, introduces himself during an election campaign in Bangkok, Thailand, Tuesday, May 17, 2022. Residents of the Thai capital Bangkok will cast their ballots for the city’s leader Sunday in a vote seen as a barometer of the public mood ahead of an approaching general election. (AP Photo/Sakchai Lalit)

BANGKOK (AP) — Nine years after the last elections, and six years after the military government installed its governor, residents of the bustling Thai capital will finally cast their ballots Sunday for the city’s leader in a vote that could tip the balance in favor of the opposition ahead of an approaching general election.

Opinion polls suggest that candidates associated with opposition parties in Parliament will dominate in the race for Bangkok's governor, while the incumbent, who is seen as the ruling party’s choice, trails behind.

Thailand’s biggest city is legally a province and the only one where residents can choose their own governor. The position elsewhere is appointed by the Interior Ministry. Bangkok voters' choice for governor in 2013 was replaced three years later by an appointee of the military government then leading Thailand.

Thai politics since coups in 2006 and 2014 has been generally polarized between pro- and anti-military parties, and the top candidates reflect that schism.

The frontrunner in the upcoming election, Chadchart Sittipunt, is running as an independent. But both his supporters and opponents see him as a proxy for the main opposition party, Pheu Thai, for which he stood as a prime ministerial candidate in the 2019 general election. He served as transport minister in a Pheu Thai government from 2012 to 2014.

A record-high 31 candidates entered the race, but Chadchart's performance against one candidate in particular is drawing special scrutiny.

Asawin Kwanmuang was appointed governor in 2016 by Prayuth Chan-ocha, the former general who seized power in the 2014 coup and was returned to office following the 2019 election as Thailand's prime minister.

Like Chadchart, the former senior policeman Asawin says he is standing as an independent, though he is very much seen as the government’s candidate, a stand-in for the ruling Palang Pracharath party.

“I urge (people) to vote for the ‘Love Bangkok’ team. Our team isn’t linked to any political party. Our team truly wants to develop Bangkok to be a better city,” he told reporters at a campaign rally last week.

A third candidate whose results will be carefully watched is Wiroj Lakkhanaadisorn from the opposition Move Forward Party. His party takes a more critical stance than Pheu Thai toward the government, but for that reason could siphon votes from Chadchart's total, to Asawin’s benefit.

The candidates are campaigning on local issues: congestion, pollution, persistent flooding and others. But the poll will likely be influenced as much by its timing as its issues.

Prayuth has been in power for eight years. He is expected soon to face a no-confidence motion in Parliament, and rivals on his own side have long been rumored to be seeking to remove him. Even if he survives, there must be a general election by the early part of next year.

Prayuth was able to rule by decree as head of a military government but has struggled with the limits of parliamentary democracy, taking fire especially for fumbling Thailand’s coronavirus vaccination program and recovery plan.

“People are fed up. They’re fed up because the economy is going nowhere, there’s no vision ahead,” said political science professor Thitinan Pongsudhirak of Bangkok’s Chulalongkorn University.

“There’s no future, that’s why young people are protesting. General Prayuth is way out of his league so I think we will see the voters saying something here for the Bangkok governor’s election and that will be a harbinger, a sign of things to come for the broader polls for Thailand."