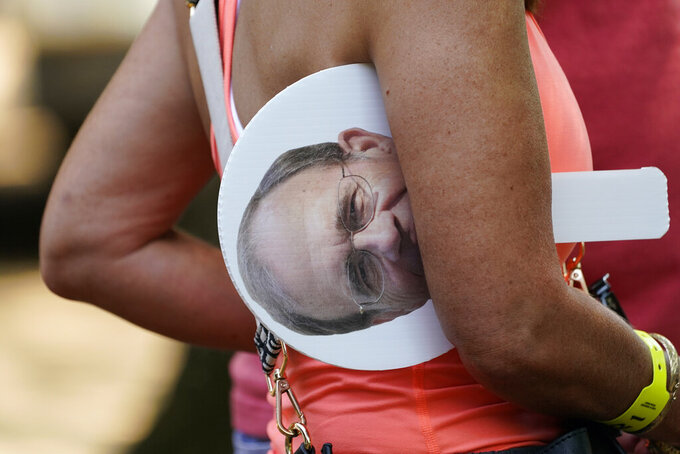 Rogelio V. Solis, ASSOCIATED PRESS
An attendee holds a fan with the photograph of Mississippi Lt. Gov. Delbert Hosemann under her arm at the Neshoba County Fair in Philadelphia, Miss., Wednesday, July 28, 2021. Hosemann yearly hands out fans to attendees as a means to cool down during hot spells. (AP Photo/Rogelio V. Solis) 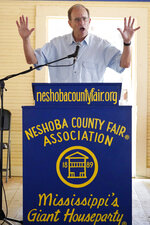 “The time for simply saying ‘no’ to our options for working Mississippians has passed,” Hosemann said in a speech prepared for delivery at the Neshoba County Fair. “When a cancer diagnosis can bankrupt a family, we have a responsibility to help. Further, no Mississippian should be further than 30 minutes from an emergency room."

Speaking of the Senate hearings, Hosemann said: “From managed care, to scope of practice issues, to insurance options, everything is on the table.”

Mississippi is among a dozen states that have resisted expanding Medicaid to the working poor. The program is paid by state and federal money, and expansion is an option under the health care overhaul signed into law in 2010 by then-President Barack Obama.

Gov. Tate Reeves and other Republican leaders in the Mississippi Legislature have said repeatedly that they believe the state cannot afford Medicaid expansion, even with the federal government paying most of the cost. Hosemann has not taken a position for or against expansion.

Hosemann also said Wednesday that he wants to find ways to put more Mississippi residents to work with job training programs, according to his speech text. He pledged that the Senate will hold hearings on “comprehensive tax reform.”

Reeves is among the speakers scheduled for Thursday at the Neshoba County Fair, which bills itself as “Mississippi's Giant Houseparty.”

The eight-day event attracts thousands of people to the red clay hills south of Philadelphia, where extended groups of families and friends stay in colorful cabins. For two days, politicians speak under a tin-roofed pavilion to spectators who sit on wooden benches or try to grab shady spots under trees nearby.

The fair was canceled in 2020 because of the COVID-19 pandemic, but organizers decided months ago to go ahead with it this year. The delta variant of the virus has been spreading rapidly in Mississippi this month.

A sign at the fairgrounds' entry said COVID-19 vaccinations were available at a first-aid station. Many people shunned masks Wednesday as they socialized outside.

During his speech, Hosemann said the Senate will continue to look at pay raises for teachers and will put more money into preschool programs.

“If the pandemic proved anything, it is our children want and need to be back in our classrooms in front of a dedicated teacher,” Hosemann said, according to the text. “Every school needs to open in-person this fall.”

The state Supreme Court handed down a ruling in May that overturned a medical marijuana initiative that voters had approved in November. Justices found that Mississippi's initiative process was no longer valid and the medical marijuana proposal was not properly on the ballot.

This story has been corrected to show the fair lasts eight days, not 10.