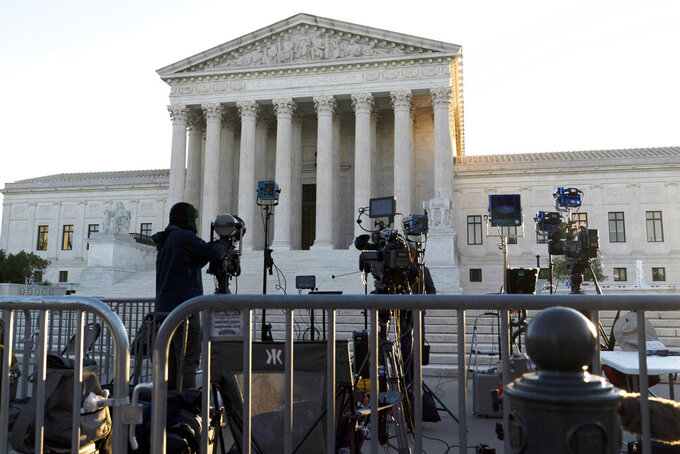 Jose Luis Magana, ASSOCIATED PRESS
The U.S. Supreme Court is seen on Capitol Hill in Washington, Wednesday, Nov. 3, 2021, as television cameras are set up. The Supreme Court is set to hear arguments in a gun rights case that centers on New York’s restrictive gun permit law and whether limits the state has placed on carrying a gun in public violate the Second Amendment. (AP Photo/Jose Luis Magana)

WASHINGTON (AP) — The Supreme Court on Wednesday seemed ready to strike down a restrictive New York gun permitting law, but the justices also seemed worried about issuing a broad ruling that could threaten gun restrictions on subways, bars, stadiums and other gathering places.

The court was hearing arguments in its biggest guns case in more than a decade, a dispute over whether New York's law violates the Second Amendment right to “keep and bear arms.” The law’s defenders have said striking it down would lead to more guns on the streets of cities including New York and Los Angeles.

Supreme Court decisions in 2008 and 2010 established a nationwide right to keep a gun at home for self-defense. The question the court is now confronting is about the right to carry a gun outside the home.

During two hours of arguments conservative members of the court, where they have a 6-3 majority, suggested New York's law and perhaps others like it in half a dozen other states go too far. Why, Chief Justice John Roberts asked, does a person seeking a license to carry a gun in public for self defense have to show a special need to do so.

“The idea that you need a license to exercise the right, I think, is unusual in the context of the Bill of Rights,” he said.

But Roberts was also among the justices who pressed a lawyer for the law's challengers on the places where guns might be prohibited. Could a football stadium or a college campus be off limits, he asked. Could a state say “you cannot carry your gun at any place where alcohol is served?”

Paul Clement, arguing on behalf of New York residents who want an unrestricted right to carry concealed weapons in public, replied that while restrictions on carrying a weapon at government buildings and schools are likely fine, as the court suggested in 2008, bars “might be a tougher case for the government.”

Clement acknowledged that might be fine. In response to other questions, he said restrictions on guns in the New York City subway system and Yankee Stadium might also be okay.

Justice Brett Kavanaugh suggested that difficult questions about where exactly guns can be prohibited might be left for another day. “We don’t have to answer all the sensitive places questions in this case, some of which will be challenging no doubt, is that accurate?" he asked Clement, who agreed.

In most of the country gun owners have little difficulty legally carrying their weapons when they go out. But about half a dozen states, including populous California and several Eastern states, restrict the carrying of guns to those who can demonstrate a particular need for doing so. The justices could decide whether those laws, known as “may issue” laws, can stand.

New York's law has been in place since 1913 and says that to carry a concealed handgun in public for self-defense, a person applying for a license has to demonstrate “proper cause,” an actual need to carry the weapon.

The Biden administration, which is urging the justices to uphold New York’s law, says California, Hawaii, Maryland, Massachusetts, New Jersey and Rhode Island all have similar laws that could be affected by the court's decision. Those states make up about a quarter of the U.S. population. Arguing for the federal government, Brian H. Fletcher called New York's law “consistent with the Second Amendment because it is firmly grounded in our nation’s history and tradition of gun regulations.”

The court’s liberal justices seemed willing to allow the state law to remain in place. Justice Elena Kagan called it “completely intuitive” that different states would have different gun laws, and that it is harder to get a license to carry a gun for self-defense in New York City than in a more rural area of the state. And Justice Sonia Sotomayor said that in her view, looking at the history and tradition of the Second Amendment, “states get a lot of deference” on restrictions.

Justice Stephen Breyer asked what kind of license the law’s challengers were asking for. Is the license “supposed to say you can carry a concealed gun around the streets or the town or outside just for fun? I mean, they are dangerous, guns,” he said.

Justice Samuel Alito asked whether New York's law would allow a person to get a license to carry a gun if they get off work late and have to travel through a high crime area to get to a subway or bus. New York Solicitor General Barbara D. Underwood, arguing for the state, said no; that person has no specific need for a weapon that's different from the general public.

“But how is that consistent with the core right to self-defense, which is protected by the Second Amendment?” Alito asked. He said there are many people with illegal guns “walking around the streets” in New York while “the ordinary, hard-working, law-abiding people I mentioned, no they can’t be armed?”

Underwood said that there's no right “to be armed for all possible confrontations in all places.” She also said that allowing New York only to limit the carrying of guns in sensitive places would be inadequate.

“In principle it has an attractive quality to it, but in implementation I think it would be unsuccessful,” she said.

The arguments at the high court come as gun violence has surged. New York has told the justices that if they side with the law’s challengers it would have “devastating consequences for public safety.” Gun control groups say if a high court ruling requires states to drop restrictions, the result will be more violence.

Gun rights groups, meanwhile, say the risk of a confrontation is precisely why they have a right to be armed for self-defense. Clement, arguing for the law's challengers, said the nation's founders envisioned people making their own decisions about carrying a firearm outside the home for self-defense.

“In 43 states, people are able to do that,” he said, adding “it doesn't mean that those 43 states have any more problems with violent crimes” than the states like New York.