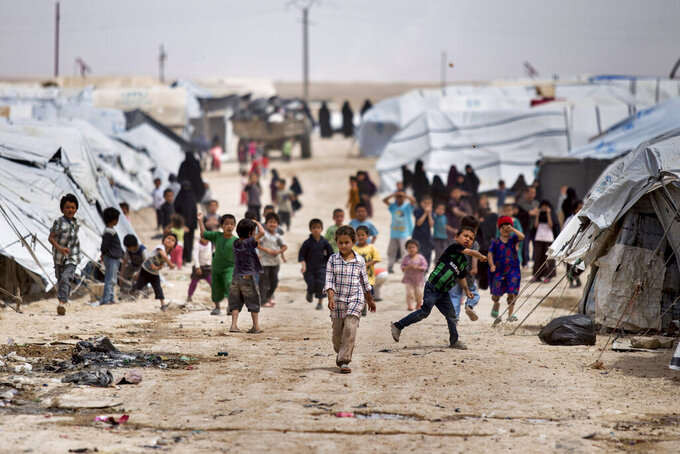 Baderkhan Ahmad, ASSOCIATED PRESS
FILE - Children gather outside their tents at the al-Hol camp, which houses families of members of the Islamic State group, in Hasakeh province, Syria, May 1, 2021. Doctors Without Border warned in a report released Monday, Nov. 7, 2022, that the camp is witnessing pervasive violence, exploitation and lawless at a time when countries that have citizens in the facility have failed to take responsibility for protecting them. (AP Photo/Baderkhan Ahmad, File)

Doctors Without Borders also said that countries with citizens held in the detention center of al-Hol in Syria’s northeastern province of Hassakeh have failed to take responsibility for protecting them. Repeated breaches of human rights and recurrent patterns of violence have been observed at the camp, said the group, also known as Medecins Sans Frontieres or MSF.

MSF, which runs mobile clinics and also clinic for patients with chronic diseases in the camp, said that counter-terrorism policies have trapped thousands of civilians in the camp in a cycle of indefinite detention, danger and insecurity.

In addition to the killings in the camp, this cycle of violence “permeates every aspect of their daily lives and deprives them of their fundamental human rights,” it said.

The report came as several Western countries have repatriated dozens of women and children over the past weeks, according to the Kurdish-led local authorities in northeastern Syria. The latest repatriations from al-Hol followed a major security operation in the facility and a call by a top U.S. military commander for repatriations.

Following the rise of IS in 2014 and its declaration of a co-called Islamic caliphate, some countries stripped some of their citizens who had headed to Syria and Iraq to join IS of their nationalities. A German woman with IS was sentenced last year for crime against humanity for killing a 5-year-old Yazidi girl, while some women at al-Hol still feed their children the group’s extremist ideology.

However, MSF's report said members of the U.S.-led coalition that fought IS, as well as other countries whose nationals remain held in al-Hol and other detention facilities and camps in northeastern Syria, “have failed to take responsibility for protecting their nationals or for identifying long-term solutions to their indefinite containment.”

Instead, these countries “have delayed or simply refused to repatriate all their nationals, in some cases going so far as to strip them of their citizenship, rendering them stateless,” the group said.

Kurdish authorities currently operate more than two dozen detention facilities scattered across northeastern Syria, holding about 10,000 IS fighters. Among the detainees are some 2,000 foreigners whose home countries have refused to repatriate them, including about 800 Europeans.

At al-Hol, about 50,000 Syrians and Iraqis are crowded into tents in the fenced-in camp. Nearly 20,000 of them are children; most of the rest are women, wives and widows of IS fighters.

In a separate, heavily guarded section of the camp known as the annex are an additional 10,000 people: 2,000 women from 57 other countries — they are considered the most die-hard IS supporters — along with about 8,000 of their children.

The report by MSF came nearly two months after U.S.-backed Syrian fighters concluded a 24-day sweep at al-Hol during which dozens of extremists were detained and weapons were confiscated in the operation. The operation came after IS sleeper cells committed crimes inside the camp.

“Residents have described themselves as being trapped ‘between two fires,”’ MSF said referring to violence by the extremists inside the facility and security operations by U.S.-backed fighters.

In mid-October, France repatriated 15 women and 40 children, and later officials from Germany, the Netherlands, Canada and Australia visited northeast Syria and were handed dozens of women and children to take back home, according to figures released by Kurdish authorities. Dozens of Iraqi and Syrian families were also repatriated over the past year.

MSF also criticized the U.S.-led coalition for leaving the situation in the hands of the local Syrian Kurdish-led authorities and urged the coalition to pressure them to take "immediate steps to guarantee people’s wellbeing, protection and fundamental human rights” at al-Hol.

Khaled Ibrahim, another local official in northeastern Syria, said about 1,000 children and 500 women have been repatriated since 2019.

But local authorities cannot control the large numbers of people still at al-Hol.

“This is a time bomb,” Ibrahim said.