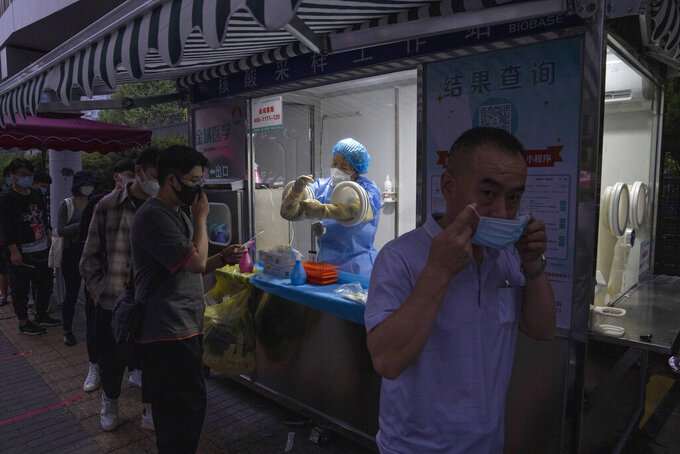 Ng Han Guan, ASSOCIATED PRESS
A man masks himself after getting a nuclei test for COVID-19 in Beijing Saturday, Sept. 18, 2021. China's "zero tolerance" strategy of trying to isolate every case and stop transmission of the coronavirus has kept kept the country where the virus first was detected in late 2019 largely free of the disease. (AP Photo/Ng Han Guan)

BEIJING (AP) — The Beizhong International Travel Agency in the eastern city of Tianjin has had only one customer since coronavirus outbreaks that began in July prompted Chinese leaders to renew city lockdowns and travel controls.

Most of China is virus-free, but the abrupt, severe response to outbreaks has left would-be tourists jittery about traveling to places they might be barred from leaving. That has hit consumer spending, hindering efforts to keep the economic recovery on track.

China's “zero tolerance” strategy of trying to isolate every case and stop transmission has helped keep the country where the virus first was detected in late 2019 largely free of disease. But the public and businesses are paying a steep price.

Foreign athletes are due to compete in the Winter Olympics that start Feb. 4 in Beijing and the nearby city of Zhangjiakou, but the government has yet to say whether restrictions that prevent most foreigners from entering China will be relaxed to allow spectators in.

“Two years ago, this was our busiest season,” said the Beizhong agency manager, Wang Hui.

“Now, customers tend to postpone their plans because of the outbreaks,” Wang said. “This year is worse than last year.”

China is closed to most foreign visitors and discourages its own public from traveling.

The government has yet to give final details on anti-coronavirus measures for the Winter Games. Some 2,900 athletes are due to compete, plus 800 more in the Paralympic Winter Games on March 4-13.

China has reported 4,636 deaths — and none since February — out of 95,577 cases since early 2020. Its total is smaller than one-day new infection figures in the United States, India and some other countries.

Since July, outbreaks blamed on travelers bringing the more contagious delta variant into the country have occurred in Nanjing west of Shanghai, Putian and Xiamen in the southeast and Yunnan province in the southwest. But cases number in the dozens, not the tens of thousands of new daily infections seen in other countries.

“The zero-tolerance policy has been highly effective in putting COVID under control, but the short-term cost is also extremely high,” economists Larry Hu and Xinyu Ji of Macquarie said in a report.

China was the only major economy to grow last year after the ruling party declared the virus under control in March and allowed factories, shops and offices to reopen. Output in the United States, Europe and Japan contracted.

Economic output rose 1.3% over the previous quarter in the three months ending in June, better than 0.6% in January-March but among the past decade’s weakest quarters.

The International Monetary Fund and private sector forecasters have lowered economic growth forecasts but still expect output to rise by as much as 8.5% this year, up sharply from last year’s multi-decade low of 2.3% and well above the ruling party target of “more than 6%.”

“People are clearly worried that they could get trapped in tourist destinations if Covid cases emerge," economist Iris Pang of ING said in a report.

Authorities on Sept. 12 suspended most access to Putian, a city of 2.9 million people in Fujian province, after an outbreak that an official newspaper, Global Times, said might have begun with a resident who returned from Singapore. Cinemas, bars and other public facilities were closed. Supermarkets and restaurants were ordered to limit customer numbers.

Xiamen, a coastal business center in Fujian with 3.5 million people, closed off access to some neighborhoods after cases were detected there. Schools shut down.

An entrepreneur who sells shoes made in Putian online said the outbreak and anti-disease controls have shut down that local industry.

“Customers are urging us to deliver goods, but factories have stopped working,” said the merchant, Su Ye. She said September and October usually are busy, but disruptions in production and delivery “will cause orders to drop a lot.”

“Many orders were canceled because of our slow delivery,” Su said.

The Global Times said a man who returned from Singapore on Aug. 4 was suspected of spreading the virus to Putian.

The traveler, identified by the surname Lin, underwent a 14-day quarantine and nine nucleic acid and serologic tests, all of which were negative, the Global Times said. But he tested positive on Sept. 10.

Despite that, the screening and quarantine process is working properly, according to Yu Changping, a physician at the Department of Respiratory Medicine of People’s Hospital of Wuhan University.

“There is no special change in the situation,” said Yu. "There is no need to adopt measures different from the past.”

Some experts suggest China might need to adopt more flexible tactics because “zero tolerance” is too disruptive and new variants might be impossible to eradicate.

“The bottom line is, I don’t think they can keep the virus out, and they need to live with the reality," said Nicholas Thomas, a professor of health security at the City University of Hong Kong.

Chinese leaders have tried to squelch public discussion of such a possible change.

A prominent disease expert, Zhang Wenzhong, faced official criticism after he said on his widely read social media account the world needs to “learn to coexist with the virus.”

A former health minister rejected Zhang's suggestion in a commentary published by the Communist Party newspaper People's Daily. The university that awarded Zhang's PhD in 2000 announced an investigation of accusations of plagiarism but concluded his work “met all the criteria” for the degree.

For now, tourist arrivals from abroad are shut down. That has devastated high-end hotels and resorts.

Some engineers and other employees who were abroad when the government shut down travel in early 2020 have been allowed to return, but lawyers and others say they were turned away.

Authorities also are trying to keep Chinese from leaving the country. The government refuses to issue or renew passports without an important need to travel. Businesspeople have been told that doesn’t include visiting customers or business partners.

The government announced last week it had vaccinated just over 1 billion people, or 71% of its population.

But while regulators have given emergency approval to nine coronavirus vaccines, most are made by local companies Sinopharm or Sinovac. China has yet to approve BioNTech, Moderna or other vaccines used abroad.

“As far as the vaccine strategy is, it’s been very successful, the trouble is the Sinopharm and Sinovac vaccines are not very efficacious against delta,” Thomas said.

As is true elsewhere, online grocers and other e-commerce have reaped a windfall from shutdowns and lockdowns.

But a wave of bankruptcies has hit small shops, restaurants and other businesses.

China’s populous domestic market means travel restrictions “do not impact it as much as countries such as Thailand that depend heavily on tourism,” said Trinh Nguyen of Natixis, a French financial firm, in an email.

In another blow to tourism, the government told students and teachers to avoid travel during September’s Mid-Autumn Festival and the Oct. 1-7 National Day break.

“There used to be a silver September and a golden October for travel, but now we have nothing,” said Wang, the travel agency manager in Tianjin.

People suffering from cancer, heart disease and other chronic, potentially life-threatening conditions, meanwhile have struggled to get treatment as hospitals shut down other departments to focus on treating coronavirus patients or refused to accept cases deemed non-emergency.