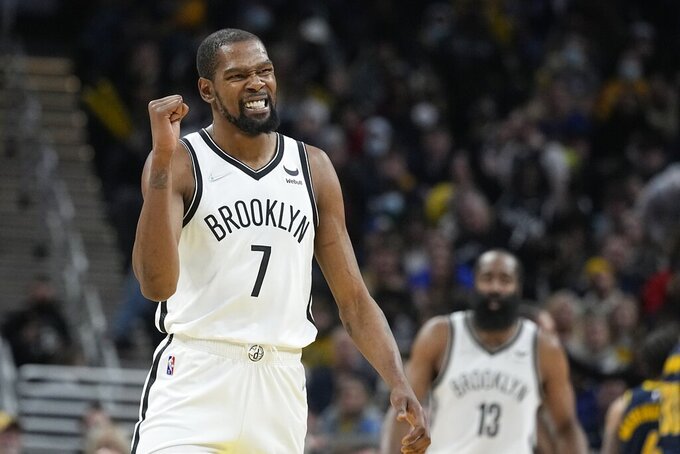 Darron Cummings, ASSOCIATED PRESS
FILE - Brooklyn Nets' Kevin Durant reacts during the second half of an NBA basketball game against the Indiana Pacers, Wednesday, Jan. 5, 2022, in Indianapolis. Kevin Durant has requested a trade from the Brooklyn Nets, according to a person with direct knowledge of the seismic decision that undoubtedly will have teams scrambling to put together enormous offers for the perennial All-Star. (AP Photo/Darron Cummings, File)

Kevin Durant may be taking his quest for more titles elsewhere.

Durant has requested a trade from the Brooklyn Nets, according to a person with direct knowledge of the decision that undoubtedly will have teams scrambling to put together offers for the perennial All-Star.

The Nets have been working with Durant to find a trade partner, and he has multiple teams on his preferred list, according to the person who spoke to The Associated Press on condition of anonymity Thursday because neither the player nor Brooklyn revealed any details publicly.

ESPN first reported Durant's trade request, citing Phoenix and Miami as two of his preferred destinations. The bombshell came just hours before the NBA's free-agent period for this summer was set to begin.

The news also came exactly three years to the day after Durant announced that he was joining Brooklyn in a social-media post — a move that came June 30, 2019.

Durant is a 12-time All-Star, four-time scoring champion, three-time Olympic gold medalist and two-time NBA champion — those rings coming with Golden State, the team he was with before joining Brooklyn. He has four years and nearly $200 million remaining on his contract, which means that it may take a haul of players, draft picks or possibly both for a team to acquire him.

Durant has played 14 seasons, not including one year when he sat out while recovering from a torn Achilles. He has averaged 27.2 points in his career — over that span, only LeBron James, at 27.3 points per game, has averaged more.

And even at his age — Durant will turn 34 on Sept. 29, around the time training camps open this fall — he is still one of the best players in the game, his 6-foot-10 frame making his jump shot almost unstoppable by any defender.

Durant spent three seasons with Brooklyn, not playing in the first of those years while he recovered from the Achilles injury. He averaged 29.9 points in 55 games last season, after leading the U.S. to Olympic gold at the Tokyo Games last summer.

Unless he changes his mind and stays, his departure will be a huge blow to the Nets. At this time last year, the Nets were banking on contending for a championship with a core led by Durant, James Harden and Kyrie Irving.

That plan didn't come close to reality. Irving missed much of the year because of his refusal to be vaccinated against COVID-19; he was ineligible to play in home games for the majority of the season. Harden wound up getting traded to Philadelphia for Ben Simmons, who didn't play at all last season. Durant led Brooklyn into the playoffs, where it was swept in the first round by eventual Eastern Conference champion Boston.

And the offseason hasn't exactly been calm for the Nets, either. Irving's future was a major question mark until he decided to exercise his $37 million option earlier this week to remain with Brooklyn this coming season.

Now, Durant wants out, and the Nets will either have to change his mind or go ahead with moves that will overhaul their team.