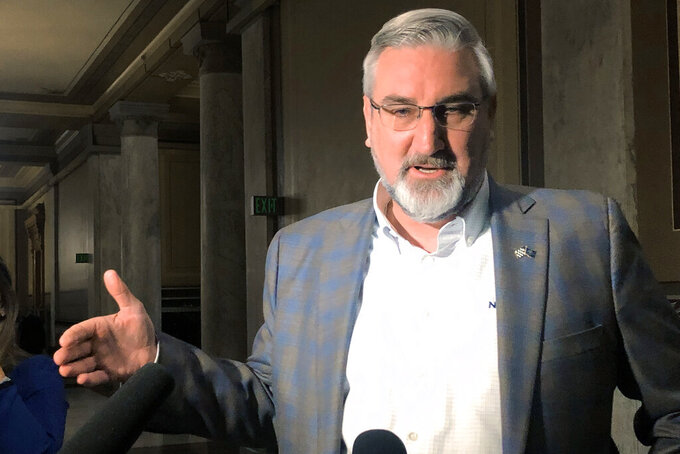 Tom Davies, ASSOCIATED PRESS
FILE - Indiana Gov. Eric Holcomb speaks with reporters at the Indiana Statehouse in Indianapolis Feb. 23, 2022. Indiana Republicans aren't showing signs of putting the brakes on rising state gasoline taxes even as the state government continues its streak of fast-growing tax collections. Democrats have been calling over the past week for Republican Gov. Eric Holcomb to issue an emergency order suspending the gas tax or for the GOP-dominated Legislature to do so when lawmakers hold a one-day meeting next week. (AP Photo/Tom Davies)

INDIANAPOLIS (AP) — Indiana’s governor said Wednesday he was preparing a plan to potentially tap into the growing state budget surplus to help residents with the national inflation jump, while rejecting calls for suspending state gas taxes.

Democrats have been calling since March for a temporary gas tax suspension, only to be rebuffed by Republican Gov. Eric Holcomb and the GOP-dominated Legislature.

Holcomb said it would be “misguided” to cut the 56 cents per gallon in state taxes on gasoline and agreed with Republican legislative leaders that doing so would be an inefficient way of getting financial help to people across the state.

Supporters of a gas tax cut argue the state can afford such a move as its state tax collections have surged about 12% from a year ago, potentially pushing state cash reserves from last year’s record level to $3.9 billion to about $6 billion by the end of June.

Holcomb said he expected to release a plan in early June for what he called “inflationary relief” but provided no details.

“I want to make sure that relief gets exactly to Hoosiers who are feeling the sting of this national inflation,” Holcomb said.

Republican Senate President Pro Tem Rodric Bray said even if the state gas tax was suspended, there is no guarantee that pump prices would be cut by the full amount.

“Additionally, you’ve got people coming in from out of state who use our roads and help to pay for them who would benefit from that, as well as large companies,” Bray said Tuesday. “So trying to get money back into Hoosiers’ hands, it’s not a great way to do it.

Indiana had an average pump price of $4.58 for a gallon of regular as of Wednesday, down a couple cents from last week but up from $3.92 a month ago, according to AAA.

Republicans disregarded requests from Democrats to take action on the gas tax as lawmakers held a special one-day meeting Tuesday to override Holcomb’s veto of a bill banning transgender females from competing in girls school sports.

“Real Hoosiers that are driving Indiana roads will save money at the pump and it’ll affect their wallets,” GiaQuinta said. “It’s a good idea to do it.”

Republicans say they are assisting residents already with the $125 payments being made this spring to Indiana taxpayers under the state’s automatic taxpayer refund law and the plan approved by the Legislature in March to gradually cut the state individual income tax rate of 3.23% to 2.9% beginning next year until its planned full implementation in 2029.

“We could consider something along the lines what we did on the automatic taxpayer refunds,” Republican House Speaker Todd Huston said. “I just want to make sure that what we do impacts all Hoosiers, including those that don’t drive a lot but that are going to the grocery store or seeing the increases in their utility costs.”

Holcomb didn’t specify whether his proposals would lead to him calling legislators into a special session since this year’s regular session concluded in March.

“It’ll depend on how creative we are,” Holcomb said. “But it very well could.”