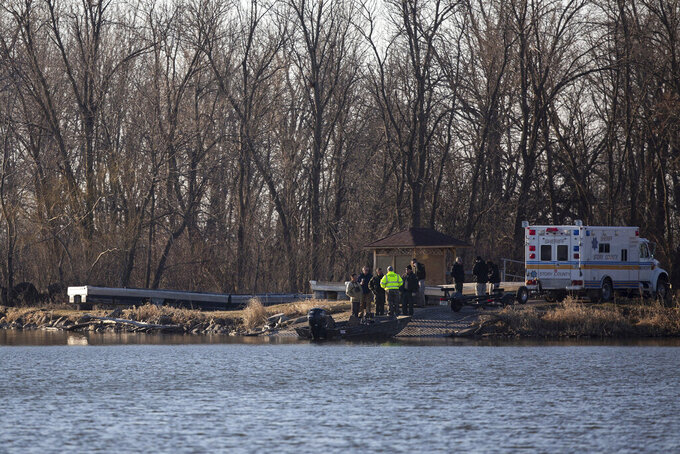 Kelsey Kremer, ASSOCIATED PRESS
Law enforcement gather near a boat ramp on Little Wall Lake as they resume the search for a missing Iowa State University Crew Club member on Monday, March 29, 2021, in Hamilton County. The ISU student has been missing since the rescue of three other students and the death of one on the lake Sunday. (Kelsey Kremer/The Des Moines Register via AP)

AMES, Iowa (AP) — Iowa State University plans to review its policies and procedures for 55 school sports clubs following the drowning of two members of the student crew club at the weekend, the school said Thursday.

Yaakov Ben-David, 20, a sophomore from Washington D.C., and Derek Nanni, 19, a freshman from Normal, Illinois, drowned when their boat capsized Sunday at Little Wall Lake in Hamilton County, north of the Iowa State campus in Ames, Iowa. Three other crew members were rescued.

The school’s sports clubs are largely outside of university control but, following the accident, the school will also create the position of Sport Club Safety Officer to work with the clubs, the school said in a news release.

The president of the crew club had raised some concerns about safety in February last year, saying the club should institute a mandatory swim test of team members among other improvements, the university said.

The president of the crew club also told the university’s Recreational Services department that the club needed a new dock and a new or repaired launch/coach boat. The club subsequently implemented the swimming test for all team members and had raised $19,500 of its $25,000 goal to build the dock. No launch/coach boat was acquired, the university said.

The university’s review will analyze whether the school responded adequately to the crew club president’s concerns, the release said.

The university’s review also will analyze whether the current level of autonomy is appropriate for sports clubs and whether it provides the correct level of support and oversight.

USRowing, a nonprofit group that is the national governing body for rowing, will conduct a safety review of the accident and the safety policies of the Iowa State crew club.

The club has decided it will not practice, compete or hold other activities until the review is complete.

This story has been corrected to show Iowa State University is reviewing its sports club policies, not the University of Iowa.