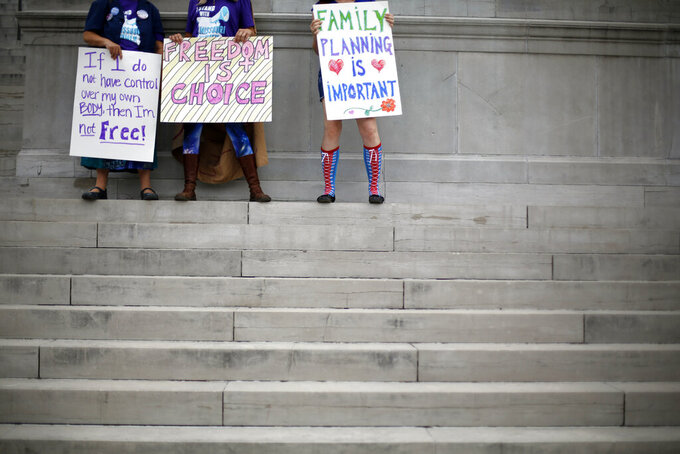 Jeff Roberson, ASSOCIATED PRESS
FILE - Abortion rights activists hold signs as they stand on the steps of the Missouri Capitol, Sept. 10, 2014, in Jefferson City, Mo. St. Luke's Health Kansas City, operator of 16 hospitals, briefly stopped providing emergency contraception over concerns that the state’s abortion ban could put doctors at risk of criminal charges if they provide the medication known as the morning-after pill, even for sexual assault victims, only to restart the procedures on Wednesday, June 29, 2022. (AP Photo/Jeff Roberson, File)

A large Missouri hospital chain briefly stopped providing emergency contraception amid confusion over whether the state's abortion ban could put doctors at risk of criminal charges for providing the medication, even for sexual assault victims.

St. Luke’s Health Kansas City said in a statement Wednesday that it would resume offering the medication known as the morning after pill, a day after it told The Kansas City Star that its Missouri hospitals would halt emergency contraception.

It did so after the state's attorney general issued a statement stating unequivicolly that emergency contraception is not illegal under an abortion ban that was enacted minutes after Friday's U.S. Supreme Court decision overturning Roe v. Wade. The Missouri law bans all abortions except in cases of medical emergency.

“Saint Luke’s Health System is aware of and continues to closely monitor legal developments regarding Missouri’s abortion trigger law, including recent comments from the Missouri Attorney General’s Office and the Governor of Missouri regarding the use of emergency contraceptives,” St. Luke's said Wednesday. “Following further internal review, Saint Luke’s will now resume providing emergency contraceptives, under new protocols, at all Missouri-based Saint Luke’s hospitals and clinics.”

The statement said the “ambiguity of the law, and the uncertainty even among state officials about what this law prohibits, continues to cause grave concern and will require careful monitoring.”

Since the Supreme Court ruling, abortion rights supporters have warned about the ambiguity of some state abortion bans and that contraception could be targeted.

Lawmakers in some states with majority-conservative legislatures have suggested that. Already in Idaho, emergency contraception was prohibited at school-based health clinics last year under a law banning public funding for “abortion related services.”

Adding to the worries were comments from Supreme Court Justice Clarence Thomas, who in a separate concurring opinion urged colleagues to overturn other high court rulings protecting same-sex marriage, gay sex and the use of contraceptives.

Emergency contraception can be taken after sex and generally works by delaying or preventing ovulation. The federally approved label also says it may prevent a fertilized egg from attaching to the womb. It's been attacked by some abortion foes who believe life begins when an egg is fertilized.

The Missouri law doesn't mention birth control, including emergency contraceptives, which is sold under the brand name Plan B.

Republican state Rep. Nick Schroer, who sponsored the bill, said the intent was never to restrict access to any contraception.

“It’s not going to limit access to Plan B, and if we wanted to then that would need to be a discussion this next legislative session,” Schroer said.

In its Tuesday statement to the Star, St. Luke's spokeswoman Laurel Gifford said the hospital system “simply cannot put our clinicians in a position that might result in criminal prosecution.”

Doctors convicted under the law could serve up to 15 years in prison and lose their medical licenses.

St. Luke's has 16 hospitals, some of which are in Kansas and were not impacted.

Since the Supreme Court's ruling, demand for emergency contraceptives rose so much that some retailers, including Amazon and Rite Aid, capped how many consumers can buy.

“Retailers are being cautious. They are trying to manage it,” said Neil Saunders, managing director at GlobalData Retail. “But I don’t think there are chronic shortages.”

So far, she said, the group has been able to meet the demand.

“From our perspective, birth control is more important than it has ever been and we’re doing everything we can to make that available,’’ Hart said.

At Wellspring online pharmacy, U.S. sales totaled about 1,000 packages a day at the weekend peak, compared with 100 to 200 daily before the ruling, Koen Mullokandov, the company’s chief operating officer, said. The fervor has subsided to about six times higher than usual, but many purchasers are still buying four to six packages at a time, clearly “stocking up,’’ Mullokandov said.

“Supply is challenging because nobody was expecting this,’’ he said, adding that so far, “we have enough inventory to support the demand.’’