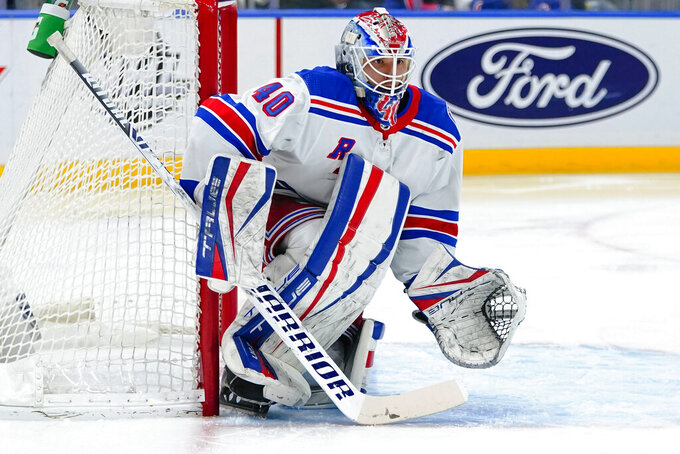 Alexander Georgiev signed a three-year deal with the Colorado Avalanche on Sunday, completing the final step toward making him the defending Stanley Cup champions ' starting goaltender in their title defense.

Georgiev's contract is worth $10.2 million and carries an annual salary cap hit of $3.4 million. He replaces Cup winner Darcy Kuemper and is expected to play in tandem with veteran backup Pavel Francouz next season.

Colorado acquired Georgiev from the New York Rangers on Thursday for third- and a fifth-round picks this year and a third-rounder in 2023.

Asked Thursday night at the NHL draft if he expected Georgiev to start, general manager Joe Sakic replied: “We do, yeah. Yeah. That’s why we did it."

He was expecting to get a contract done soon with Georgiev, who was set to be a restricted free agent.

“When he was a starter, he played really well, and he wanted a bigger opportunity and he’s got that opportunity,” Sakic added. “He’s looking forward to the challenge. What I like about it, he played in a big market. He was in New York. He can deal with a lot of that stuff. We’re excited for him.”

“Alex, he was a priority for us: We like his age, we’re a younger team and we felt we can have him for a number of years,” Sakic said. "He’s a guy that from our scouting to our analytics department that we all see a lot of upside. And he’s proven it that when he’s staring and playing a lot of games, that’s when he’s at his best.”

The Avalanche getting Georgiev and pushing Kuemper toward free agency set off a domino effect of goalie moves around the league. Minnesota re-signed Marc-Andre Fleury, Toronto cleared cap space for another move by sending Petr Mrazek to Chicago Detroit got Ville Husso from St. Louis and Washington traded Vitek Vanecek to New Jersey.