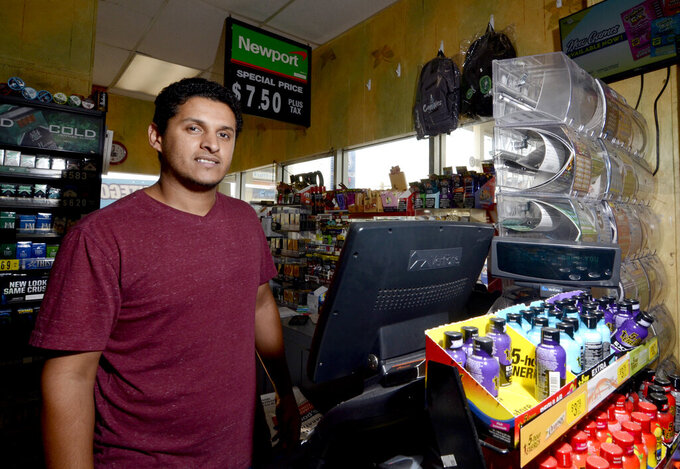 Matt Williamson, ASSOCIATED PRESS
Store clerk Jacob Aziz, who sold an $80,000 winning lottery ticket, poses for a photo behind the register at the Express Way 2 at the corner of Delaware Avenue and Anna Drive in McComb, Miss., on Tuesday, Sept. 21, 2021. (Matt Williamson//The Enterprise-Journal via AP)

A woman who bought a winning $80,000 lottery ticket in McComb has claimed her prize after reportedly losing her ticket and — luckily — finding it.

The winner successfully matched the winning numbers — 4-11-21-23-31 — in last Thursday’s Match 5 drawing when she bought the ticket at the Express Way 2 Marathon store at the corner of Delaware Avenue and Anna Drive in McComb.

Store clerk Jacob Aziz said he remembers selling the winning ticket and the person who bought it, who he said is a regular customer in her late 30s.

He said she called the store in a panic after learning the winning ticket was purchased there.

That would have been a waste of ink and paper. Annison said prize winners must produce the original ticket in order to claim their money.

“I told her you better tear up that house,” Aziz said.

Aziz said he has a history of selling jackpot-winning tickets. Two months ago he sold a $2 million state lottery ticket at a store in Michigan, he said.

“I just got here. I’ve been here for like probably a week, a week and a half,” Aziz said.

Being on the selling end of a winning lottery ticket certainly isn’t as good buying one, Aziz said, but he still finds it remarkable to be associated with two big-money winners.

For some games, stores receive a cut of the prize. The Michigan store where he worked got $2,500 for selling the $2 million jackpot winner, which Aziz said seems a little low.

“I hope one day I’m going to sell the Powerball, the winning one,” Aziz said.

This isn’t the only big jackpot-winning ticket that’s been sold in the area.

A Lincoln County man won $95,000 on a Mississippi Match 5 ticket purchased from Tobacco Mart on Highway 51 in Brookhaven in August. A Franklin County woman won $18,000 on an Electric 8s scratch-off game purchased at the same store in March.

In July, a McComb woman won $100,000 on a Cash is King scratch-off game purchased from Market Max near I-55 in McComb.

There have been a few other winners from the area going back to the beginning of the year, with much smaller prizes in the $800 to $2,000 range.

Annison said the Match 5 game has been a hit since Mississippi started selling lottery tickets two years ago.

“The odds are better for Match 5,” she said.

Since jackpots are based on ticket sales, better odds come with smaller payouts.

The odds for winning the multi-state, multimillion-dollar games make the phrase “one in a million” seem insignificant by comparison.

Powerball, has slightly better odds — 1 in 292,201,338 — to hit all five numbers and the crucial Powerball number. Just matching all five numbers but not the Powerball, which drastically reduces the prize from tens or hundreds of millions of dollars to just $1 million, has better chances, 1 in 11,688,053.