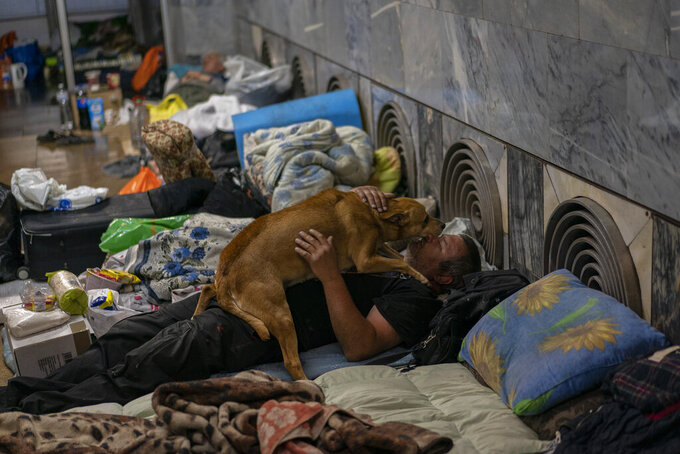 Bernat Armangue, ASSOCIATED PRESS
A man pets a dog in the city subway of Kharkiv, in eastern Ukraine, on Thursday, May 19, 2022. (AP Photo/Bernat Armangue)

An 11-year-old boy pushes his sister in a swing outside a hospital in Lviv, her dangling legs wrapped in bandages where they end. Their mother, too, has lost a leg and comforts the girl in her hospital bed.

Yarik Stepanenko, twin sister Yana and their mother, Natasha, were trying to catch a train heading west — to safety — from the eastern city of Kramatorsk when a missile hit the station on April 8. Yana lost both legs: one just above the ankle, the other higher up her shin. Natasha lost her left leg below the knee.

Yarik, left at the station in the chaos of the attack, was uninjured and has been reunited with his mother and sister as they recover at the hospital.

The Stepanenko family is one of many feeling the relentless toll of the war in Ukraine.

Iryna Martsyniuk, 50, wears a bright pink tracksuit as she stands outside her house, its roof reduced to timbers and rubble piled by the door. Martsyniuk and her three young children were at home when Russian bombing destroyed their home in Velyka Kostromka but all survived unharmed.

In Kharkiv, Roman Pryhodchenko wipes tears from his face as he stand near a mangled window inside his home that has been damaged by multiple strikes. Elsewhere, anguished mourners weep over the coffins of slain Ukrainian service members.

In a recently retaken area near Kharkiv, Ukrainian troops inspect basements and abandoned buildings, while in Kyiv servicemen load bodies of Russian soldiers into a refrigerated rail car.

Ukrainian servicemen evacuated from besieged Mariupol’s Azovstal steel plant sit on a bus near a prison in Olyonivka, in territory under the government of the Donetsk People’s Republic.

The steelworks had been the site of fierce fighting for weeks. The dwindling group of outgunned fighters had held out in the plant, drawing Russian airstrikes, artillery and tank fire before their government ordered them to abandon its defense and save their lives.