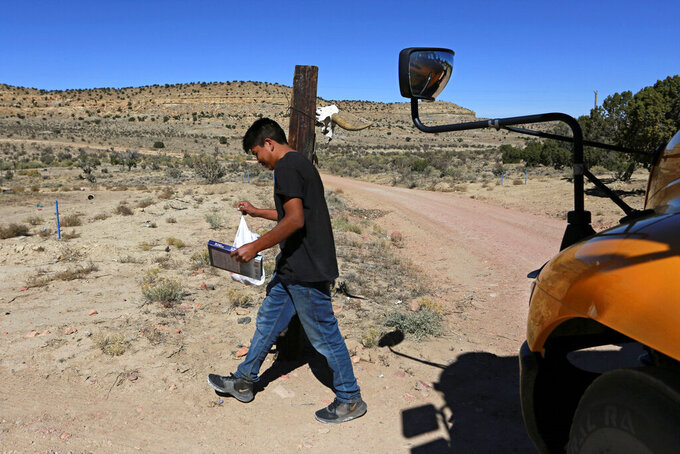 SANTA FE, N.M. (AP) — New Mexico's governor has presented a long-awaited plan that would set goals for academic proficiency as the state struggles to resolve a lawsuit by frustrated parents who won a court ruling saying the state is failing to provide an adequate education for the vast majority of its students.

Gov. Michelle Lujan Grisham's proposal released earlier this month is meant to satisfy that 2018 court ruling and ongoing litigation to ensure adequate resources to equip students as they pursue a career or college education.

New Mexico is among a long list of states where parents have turned to the court system to address frustrations with the state budget process and the quality of classroom education.

The public and advocacy groups have until June 17 to comment. The plan is expected to drive immediate reforms by the state Public Education Department, as well as discussion and budget priorities in the Legislature next year. However, critics say it lacks specifics, including detailed funding plans and timelines.

Native American education advocates and tribal leaders put forward their own plan in 2019. Called the “Tribal Remedy Framework,” it cites sections of the lawsuit, makes specific recommendations and suggests a specific amount of funding to carry them out.

“While I am hopeful and happy (the Public Education Department) has released its report and are beginning to move on their response, I am still yet perplexed as to why they have yet to publicly embrace the Tribal Remedy Framework,” said Rep. Derrick Lente, of Sandia Pueblo. He called the proposed draft “a we know what’s best for Native kids approach,” and contrasted it to the collaborative plan submitted by tribes and advocates.

Education advocates had expected the governor's proposal to be shared in December, before the January legislative session, but that didn't happen and the state budget was passed in February.

The governor's plan could also be used to determine whether a state court continues to keep watch over spending and initiatives to improve public education.

The court had found that state investments in education, as well as academic outcomes of students, proved that “the vast majority of New Mexico’s at-risk children finish each school year without the basic literacy and math skills needed to pursue post-secondary education or a career.”

For groups covered in the lawsuit, which constitute around 70% of children in the state, proficiency in reading and math at multiple grade levels was far worse than other students, with around 4% to 15% being proficient, the court found.

Lujan Grisham’s draft plan would set academic performance goals that include a 50% increase in test scores compared to 2019 numbers for children covered by the lawsuit — including Native Americans, English learners, and students with disabilities. But the education department concedes that it can't currently measure increases.

The administration has changed proficiency tests twice since the 2018 court ruling, limiting the state’s ability to argue to a court that improvements have occurred.

The state also didn't test students comprehensively for two consecutive years during the pandemic. It's rolling out a new battery of tests this year.

“When New Mexico’s assessment data are finalized and compiled later this summer, the (Public Education Department) will reset that baseline and the targets defined in the draft action plan will be attached to that data,” Public Education Department spokeswoman Carolyn Graham said in a statement. “It’s also important to note that the draft plan is, indeed, a draft, and we expect to receive valuable feedback.”

The draft plan offers no funding suggestions. It does highlight recent increases in education spending approved by the governor, including recent significant teacher salary raises and overall education funding increases. Education now accounts for around 45% of the $8.5 billion general fund budget. Unlike most other states, New Mexico funds schools through the state budget rather than relying on property tax revenues.

The administration also touts tweaks to support specific groups named in the lawsuit, including an overhaul of social studies standards that expands focus on Native American history and identity. Those changes have been welcomed by education advocates, even those continuing to mount the lawsuit.

Representatives for the plaintiffs in the ongoing lawsuit welcome the draft plan and the opportunity to respond. But they’re not satisfied with the level of detail provided by the state.

“It’s clear that it still lacks the critical elements we have been asking for on a statewide level: concrete goals, action steps, estimated funding levels, timelines, responsible parties, and estimated staffing needs,” Melissa Candelaria, education director with the New Mexico Center on Law and Poverty, said in a statement. “Community input is key but would be much more constructive on a fully fleshed out plan.”

The education department had said last year, for example, that the draft would include 90-day benchmarks for shorter-term performance targets. None of that was included in the draft released this month.

“The governor’s plans are heavy on platitudes and short on results,” said state House Minority Leader Jim Townsend, R-Artesia. He suggested that delays in producing a plan were to benefit Lujan Grisham’s reelection campaign.

Education is expected to be a central issue in the gubernatorial race this year.

Lujan Grisham spokeswoman Maddy Hayden said the draft is intended to provide a long-term guide and that more specific details will be added after the public comment period.

The education reforms were developed “collaboratively across many agencies and there is shared understanding and accountability on the part of agencies to get this critical work done,” Hayden said.

Lujan Grisham’s office declined to comment on future legal plans, such as seeking to dismiss the lawsuit again, as she tried unsuccessfully to do in 2020.

Earlier this year, the Legislature and the governor approved $500,000 in legal spending related to the case. That’s on top of an estimated $6 million already spent by Lujan Grisham, a Democrat, and her Republican predecessor to fight the lawsuit since 2014.