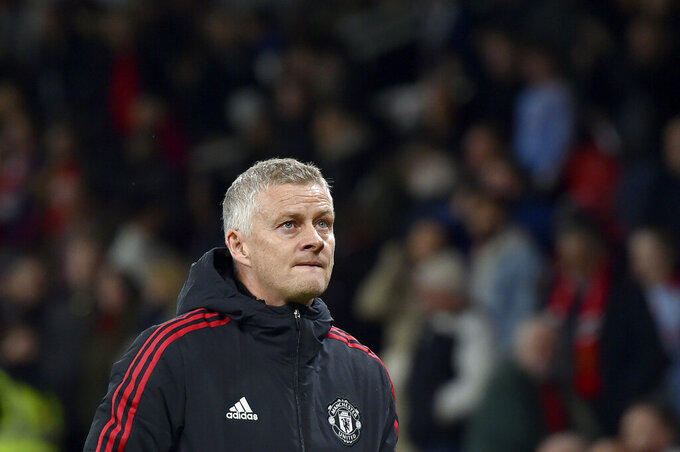 MANCHESTER, England (AP) — Ole Gunnar Solskjaer was utterly devastated, at his lowest ebb at Manchester United. Humiliated by a 5-0 loss to Liverpool, the manager still had to reach his car to leave Old Trafford.

After hearing his team booed off the field two hours earlier, the dozens of fans loitering near the team cars looked foreboding. But as Solskjaer tentatively approached, the chants of “We love you Ole” grew louder. He flashed a thumbs up back to an appreciative fan, then left the ring of security stewards to approach the barriers where autograph hunters were waiting.

Patiently, he even advised fans on the best positioning for selfies. One woman beamed a smile for a photo, but the frown lingered on Solskjaer's face. There wasn’t much to smile about and yet he spent 10 minutes meeting every request for a jersey to be signed or for a photo with kids.

“We’ll bounce back,” he told one fan.

Another supporter assured him: “You’re a legend.”

He certainly was as a player for the club, less so for his coaching acumen in his three years in the dugout since so unexpectedly replacing Jose Mourinho.

Only one point has been collected from four games and there’s Tottenham and Manchester City up next in the Premier League.

“Bring your boots on Saturday,” Solskjaer was urged by a nostalgia-tinged fan, remembering the days when the Norwegian was scoring goals that won trophies for Alex Ferguson’s United rather than presiding over embarrassments in this era of grimness and mediocrity.

“Those days are gone,” Solskjaer flashed back.

Are his days in the United job short-lived too? It’s looking precarious for him although he is still remembered so fondly here for the stoppage-time goal that clinched the 1999 Champions League trophy.

How Ronald Koeman would crave that affection. They’re less forgiving at Barcelona. Going more than four years without a trophy -- as United has done -- is unthinkable in Catalonia.

Legendary playing feats for the club — like the goal that clinched the 1992 European Cup — haven’t spared Koeman the manager from a barrage of hostility.

It only intensified on Sunday night with the type of post-match reception Solskjaer might have feared in northern England.

Koeman couldn’t even leave the Camp Nou after Sunday’s 2-1 “clasico” loss to Real Madrid without his car being confronted and insults hurled by angry Barcelona fans.

Perhaps the only doubt now is which of the club greats clings on the longest with league title hopes already fading so early in the season.

Barcelona, which won a 26th title in 2019, has slipped six points behind early leader Real Sociedad. United, without a Premier League title since Ferguson’s retirement in 2013, is eight points adrift of frontrunner Chelsea after nine games.

“Are we doing everything right and preparing right for the games in ourselves?” United defender Luke Shaw asked. “Of course we have the tactics and how the manager wants us to play, but I think at times we’re way too easy to play against.”

Barcelona has been all-too regularly outplayed, in disarray on the field in the season or so under Koeman but never utterly humiliated in the way Tottenham also scored six at United last October.

Koeman at least has the Copa del Rey title won in April, while Solskjaer lost his only final as United manager in May in the Europa League, beaten by Villarreal.

Solskjaer certainly can’t complain about not being backed by the owning Glazer family with more than $600 million spent on players across six transfer windows -- a third on defenders for a team that has conceded 12 goals in its last three games alone in all competitions.

Koeman has arrived in the Barcelona job at an unenviable time when the club has seen an existing debt problem exacerbated by the pandemic, with liabilities now exceeding 1.4 billion euros ($1.6 billion) and a profit made on transfer activity in the last two years.

The financial plight has been so perilous that Lionel Messi even had to be offloaded in the summer, just as United was able to indulge fans by investing to secure the return of Cristiano Ronaldo. At 36, this is a forward unable to have the same dynamic impact as 12 years earlier when he left United -- despite the theatrics of the late salvaged winner in the Champions League against Atalanta in the Champions League on Wednesday.

There is also promising talent emerging at Barcelona with teenagers Ansu Fati, Pedri González and Gavi being relied on far earlier than anticipated to address the deficiencies in the squad.

Koeman seems unlikely to have long in the job to see them flourish, with a contract only through to the end of the season.

United has shown far more loyalty to Solskjaer, even handing him a new three-year contract in July despite ongoing doubts about his suitability for the demands of the job and the coaching required to rectify persistent failings.

At least, unlike Koeman, he has escaped the personal harassment and abuse from the fan base. Parting with club legends is never easy and it will be more painful for United. It might be the only solution for United and Barcelona.