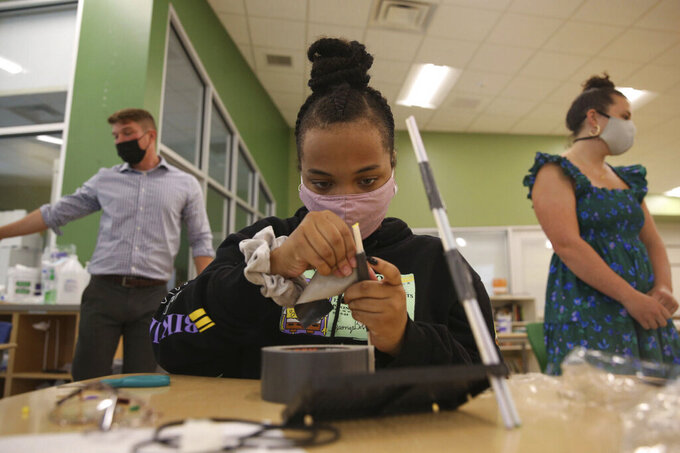 Erin Edgerton, ASSOCIATED PRESS
Olivia Turner builds a catapult during summer school at Woodbrook Elementary School on Wednesday, July 14, 2021, in Charlottesville, Va. This year, summer programs in Charlottesville and Albemarle include a greater focus on fun activities and the chance for students to socialize, in addition to addressing learning losses from the past year due to the COVID-19 pandemic. (Erin Edgerton/The Daily Progress via AP)

CHARLOTTESVILLE, Va. (AP) — Albemarle County students are learning how to be inventors during summer school this year — a four-week program that is closer to a camp than school and aimed at helping students bounce back from the last year.

“I think it’s pretty cool to come up with new things,” said Maggie Marshall, a rising sixth-grader, who is attending summer school at Brownsville Elementary.

Maggie is in her second week of summer school. So far, she’s learned about robots and how to make her own version of the Sydney Opera House, as well as a catapult designed to launch a rubber duck.

In addition to all of the cool projects and inventions, Maggie said a highlight of the program has been getting to hang out and work together with other students.

“It’s amazing,” she said. “I’ve been hanging out with my friends and it’s really fun. We get to get back to old times, sharing memories and stuff like that.”

Giving students the chance to socialize with classmates was a key reason the Albemarle and Charlottesville school divisions expanded their summer offerings this year.

The school systems also are using the summer programs to kickstart learning recovery efforts following a school year disrupted by the COVID-19 pandemic. Summer programs this year focus on fundamentals, such as reading and math skills, in addition to an array of less-academic activities during the afternoons.

“They’re getting four weeks of integrated instruction through STEM-based activities, and again just being back in the building with their friends and learning and playing sports together is a huge asset,” said Michele Castner, director of elementary education for Albemarle County.

At Brownsville Elementary, for example, 180 students are attending, 75 of whom are locked in for all four weeks. In previous years, about 50 to 100 students would be part of the summer program.

The division is spending $2.5 million of its federal stimulus funds on the summer program, which includes contracting with outside groups to provide activities in the afternoons.

In Charlottesville, enrollment in the summer program is not what administrators were hoping for, said Katina Otey, chief academic officer for the city school division.

“I blame it on COVID,” Otey said. “Many families wanted to give kids a break.”

At Walker Upper Elementary and Buford Middle schools, officials planned for 84 students at each site, and Otey said those programs are about two-thirds full. Meanwhile, the five-week elementary program could accommodate 360 students across three schools.

“Though we didn’t get as many students as we had hoped, we are really hopeful that the work that we’ve done with those that attended will prove that it was great to have this opportunity for our students,” Otey said.

Typically, the division doesn’t offer its own summer school for younger students, leaving summer learning opportunities to the Charlottesville Parks and Recreation Department, which is running its own camp this year, as well.

However, the pandemic-related disruptions necessitated a change in approach, Otey said.

The division partnered with the Brooks Family YMCA to offer the Power Scholars Academy for rising first- through sixth-graders. The morning sessions are focused on reading and math skills and are led by Charlottesville teachers. Then, YMCA staff take over in the afternoons, when students go on field trips to the YMCA facility and take part in an array of fun activities, Otey said.

Students who principals decided would benefit the most from the summer program were invited, Otey said, adding that summer school was a great way to start working on unfinished learning from the recent school year.

The different summer school programs will start wrapping up next week after kicking off in late June.

“I wish that more kids would have come so they can experience all of the work that went into making it a fun experience for them,” Otey said. “But if we can try to duplicate these efforts next year, then I think we won’t be asking for more kids because they’ll be beating down the door to be there. That’s our hope because it’s not all about ‘drill and kill.’ We wanted to be able to provide a wide range of experiences and opportunities for all of our kids so that they can have some fun while they’re learning.”

In Albemarle, Parker Thomas, a rising sixth-grader, said he’s been having fun at Brownsville’s camp and felt inspired. After two weeks in the program, he wants to be an inventor now — maybe something aviation related — and is looking forward to another week.

“Because that’s been really fun so far, so I’m really happy that I have one more subject to learn,” he said.

He also likes being with his friends again.

“It’s my last year here so might as well have some more fun times here,” Parker said.

The elementary and middle school summer program in Albemarle County was built around Camp Invention, a set of activities and projects from the National Inventors Hall of Fame. Each week, students work toward a different project that’s built around science and math concepts. All of the materials are provided by Camp Invention, reducing the prep work that school staffers have to do.

Will Donnelly, a fifth-grade teacher at Brownsville, said the camp has gone well so far — both the projects and helping children catch up on their studies.

“I think it was super important for kids to have this interaction, and to just be back in the building and interacting with their peers,” he said.

Across the parking lot, at Henley Middle School, Camp Invention is one activity that students can choose from as they map out their days. Other options include baking, painting a mural, playing in the gym or participating in book clubs and boot camps in geometry and algebra, among others.

Becky Fisher, an assistant principal at Henley overseeing the program, said the goal every summer is to bring in as many students as possible to have fun. Last year, summer school was held virtually to keep students engaged.

This summer, summer school is giving students who didn’t attend in-person classes last school year a chance to come into the building to get the lay of the land. That includes learning the layout of the building and getting to know potential teachers.

“I have kids that didn’t come into the building at all,” she said.

Fisher said another perk of summer school is that students can get to know people in other groups they might not interact with during the school year. They can also explore topics or content areas they are interested in.

“That’s so important to middle school-aged kids,” she said. “A lot of times, kids don’t feel like they have permission to explore a passion during the school year. … They may not get all of the choices during the traditional school year, so being able to explore those choices with kids during the summer is awesome.”

Two weeks in, this year’s program is going great, she said.

“I’m judging that by the kids that are asking to add weeks,” she said.

She said students have hung near her office or sent emails to make sure they are signed for another week.

About 100 students have signed up, but Fisher said about 75 to 80 are in the building on any given day.

“We’re staffed well enough that we can accept anybody any day,” she said. “We staffed based on our early registration, and people’s summer plans change, so it’s great to be able to say yes.”

In addition to the academic-related offerings, the school system contracted with several organizations to provide activities in the afternoon that are more centered around physical movement and social-emotional skills. Groups such as ACAC, the Albemarle County Parks and Recreation Department and Wildrock take over in the afternoons at the elementary and middle schools.

About 1,240 students are participating in the afternoon sessions, according to data presented at a recent county School Board meeting.

Students in the summer camps receive free breakfast and lunch. Transportation is only provided for the morning sessions.

At the high school level, summer school is more traditional, with a focus on making up courses from the past school year or earning other class credit.

“The goal was to provide choice and opportunity for students and families, and I think that the numbers will show that we have an increase in our attendance this summer,” Castner said. “We’re very intentional about making it very engaging and inspirational.”