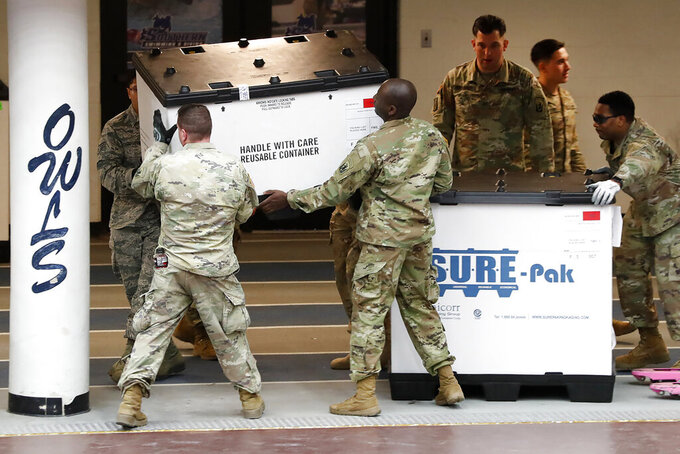 A 1978 federal law makes it a criminal felony for members of the armed forces, including the National Guard, to join or attempt to form a labor organization. But the statute only applies to service members when they are on active federal duty ordered by U.S. military officials, according to the Veterans Legal Services Clinic at Yale Law School.

The clinic is representing four Connecticut state employees unions that filed the lawsuit against U.S. Attorney General Merrick Garland and the Department of Justice. The lawsuit seeks confirmation that the law does not prevent National Guard members from unionizing while on active state duty and that they would not face criminal charges for doing so.

Maj. David Pytlik, a spokesperson for the Connecticut National Guard, declined to comment on the lawsuit’s claims, but said in a statement that the Guard has no “bearing on the court’s interpretation of Federal law.”

The office of Democratic Gov. Ned Lamont and the Justice Department declined to comment on the suit, which was filed in federal court in Connecticut.

“When we’re on state active duty, we are proud to help our home state respond to natural disasters, public health crises, and other emergencies,” Christopher Albani, a former member of the 103rd Civil Engineer Squadron in East Granby, Connecticut, said in a statement. "We just wish we had the same opportunity to join together as do the civilian state employees alongside whom we work.”

The Connecticut National Guard has been called to state duty several times over the past two years. Members have helped with cleanup efforts after major storms, aided police in response to protests and served during the state's response to the coronavirus, including setting up field hospitals and distributing supplies during the early days of the pandemic.

“Yet Guard members were not able to bargain over COVID-19 safety precautions, even though the state employees they worked directly alongside were able to have a voice in COVID-19 testing, shift safety, and other necessary precautions,” said Jody Barr, a former National Guard member and current executive director of Council 4 of the American Federation of State, County and Municipal Employees, a union with 30,000 members in Connecticut.

Council 4 is one of the four unions that filed the lawsuit, along with the Connecticut Police and Fire Union, the National Association of Government Employees and the Civil Service Employees International Union Local 2001.