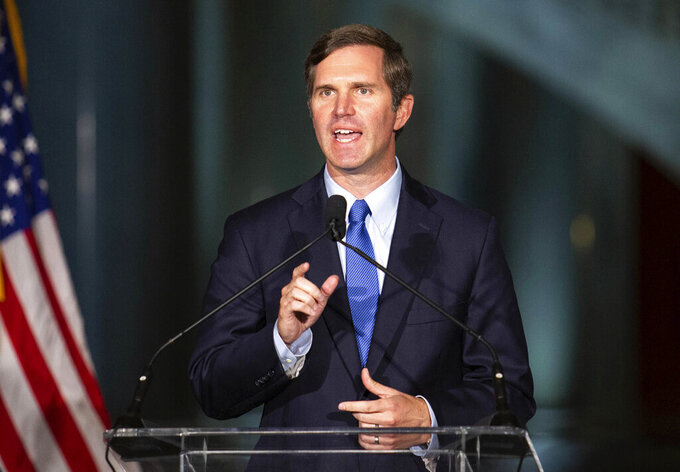 Grace Ramey, ASSOCIATED PRESS
FILE - Gov. Andy Beshear speaks at a news conference at the State Capitol in Frankfort, Ky., on Wednesday, April 13, 2022. On Monday, April 25, 2022, Beshear cited “drafting errors” in vetoing legislation that had been intended to expand the use of state lottery-supported scholarship money. (Grace Ramey/Daily News via AP, File)

FRANKFORT, Ky. (AP) — Kentucky Gov. Andy Beshear on Monday cited “drafting errors” in vetoing legislation that had been intended to expand the use of state lottery-supported scholarship money.

The Democratic governor said he was supportive of the bill's original intentions — including expanding scholarship funding for proprietary education under the Kentucky Educational Excellence Scholarship program. The popular state lottery-supported program allows students to earn money, based on academic performance, to help defray college expenses.

Beshear said he also shared the bill sponsors' desire to extend KEES scholarships to nonviolent offenders to support their transition back into society after incarceration.

“However, acknowledged drafting errors will lead to unforeseen and unintended consequences that will undermine the bill and the goals it seeks to achieve,” the governor said in his veto message. “It is my hope that early in the next legislative session, those errors can be rectified.”

The veto will stand since the measure — Senate Bill 163 — passed on the final day of this year's legislative session. Lawmakers won't reconvene until January 2023 for their next regular session.

In recent days, several organizations had urged the governor to veto the measure. The groups said the final version sent to the governor would have reduced opportunities for formerly incarcerated people to access state scholarships, contrary to the bill's original intent.

The governor said another bill he vetoed Monday would have given the Department of Fish and Wildlife Resources the authority to allow third party entities to sell licenses and permits for the agency without following a procurement process under state law and without competitive bidding.

In his veto message, Beshear objected to the “unchecked authority” he said the bill would have given the department. He said it would have broadened the eligibility of entities outside of the department to be agents for the sale of licenses and permits.

Lawmakers also sent that measure to the governor on the final day of their 60-day session, denying them any opportunity to attempt an override of the veto.

The fish and wildlife department's commissioner, Rich Storm, said late Monday that the agency is exploring “market-based license delivery options” as part of a modernization effort. The goal is to improve customer experiences while enhancing the agency's long-term financial solvency, he said.

Survey results and direct feedback from thousands of Kentucky hunters and anglers have “demonstrated strong demand for new technology and services that are currently unavailable in Kentucky,” Storm said. That includes easy access to licenses, regardless of location, he said. Similar agencies in numerous states have contracted with vendors specializing in such services, he said.

In recent days, the governor also has signed into law a number of bills that cleared the Republican-dominated legislature before the session ended.