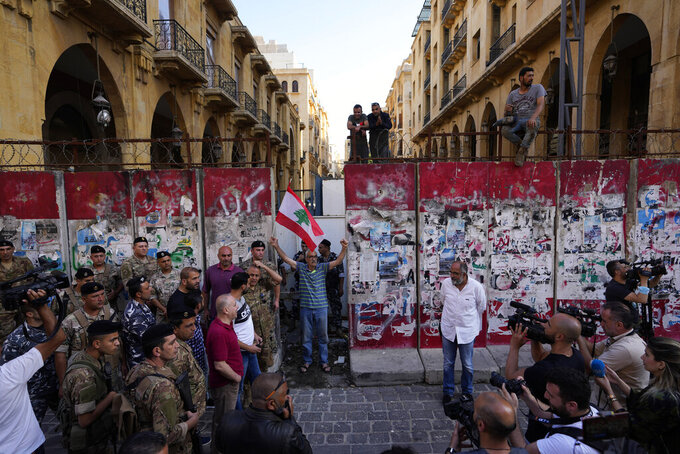 Hassan Ammar, ASSOCIATED PRESS
A Lebanese anti-government protester holds a national Lebanese flag as a team of engineers removes a concrete wall from a road that leads to the parliament building in Beirut, Lebanon, Monday, May 23, 2022. Lebanese authorities began removing giant cement barriers surrounding the parliament building in Beirut Monday, a week after a new legislature was elected. The blast walls were set up following nationwide protests that erupted in late 2019 amid an economic meltdown. (AP Photo/Hassan Ammar)

BEIRUT (AP) — Lebanon’s currency hit a new low Tuesday as deep divisions within the newly elected parliament raised concerns that political paralysis could further exacerbate one of the worst economic meltdowns in history.

The legislature elected May 15 showed no clear majority for any group and a fragmented and polarized parliament divided between pro- and anti-Hezbollah lawmakers. The sides will likely find it difficult to work together to form a new government and enact desperately needed reforms.

Among those elected to the 128-member parliament were 13 independents. They took part in the protest movement against Lebanon’s entrenched political class blamed for the crisis rooted in decades of corruption and mismanagement.

This sets up a potential clash in parliament between the two camps, raising concerns of a protracted deadlock to form a new Cabinet desperately needed to resume negotiations with the International Monetary Fund over a bailout program.

Since then, more than 80% of the population has been plunge into poverty, suffering acute shortages in electricity, medicine and other necessities as central bank reserves dry up. The crisis has also triggered the biggest wave of emigration since the 1975-90 civil war.

On Friday, Lebanon’s outgoing government approved a recovery plan for pulling the Mideast nation out of its economic meltdown. The development came during the Cabinet’s last official meeting before it becomes a caretaker government following the elections. The plan is a key IMF demand.

Outgoing Prime Minister Najib Mikati told reporters last week that the plan aims to protect small depositors while plans for protecting large depositors will be negotiated with the IMF. He offered no figures but had in the past said that small depositors are those with $100,000 or less.

On Tuesday, the Association of Banks in Lebanon blasted the government’s plan saying it is going to make depositors pay for more than $70 billion in wasted state money.