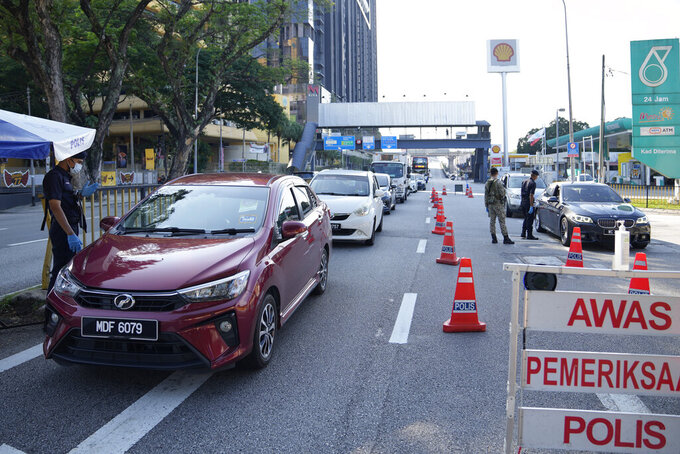 Vincent Thian, ASSOCIATED PRESS
FILE - In this June 1, 2021, file photo, police check passengers in vehicles at a roadblock during the first day of Full Movement Control Order (MCO) in Kuala Lumpur, Malaysia. Malaysia’s Parliament reopened Monday, July 26, 2021 for the first time this year after a seven-month suspension due to a coronavirus emergency that has failed to curb a worsening pandemic. (AP Photo/Vincent Thian, File)

KUALA LUMPUR, Malaysia (AP) — Malaysia’s government said it will not extend a coronavirus emergency beyond Aug. 1 as the country's Parliament reopened Monday after a disputed seven-month suspension amid a worsening pandemic.

The emergency, which allowed the government to halt Parliament since January and rule by ordinance without legislative approval, has been slammed as a ruse for embattled Prime Minister Muhyiddin Yassin to stay in power amid challenges to his leadership.

Opposition lawmakers slammed the government’s failure to tackle the pandemic despite a national lockdown since June 1. Malaysia’s total cases passed 1 million Sunday, up by eight-fold from the whole of last year and up 77% since the lockdown. Deaths have also climbed steeply to over 8,000.

After the special, five-day session of Parliament opened, Law Minister Takiyuddin Hassan said the government would not seek an extension of the emergency.

Opposition lawmakers were also taken by surprise when Takiyuddin announced the government has annulled all emergency ordinances on July 21. They questioned why the annulment wasn’t made public earlier and whether it followed the proper process. Details were hazy on how it affects measures such as penalties imposed on those breaking COVID-19 protocol.

Muhyiddin, in his briefing to the lower house, said Malaysia, like other countries, was not spared from the more contagious delta variant of the coronavirus.

He defended his government’s policies, saying economic aid has been distributed to poor households and to businesses severely hit by the lockdown. Vaccinations have also been accelerated, with the majority of the population expected to be inoculated by the year's end, he said.

“This government is not perfect but this government does not allow the people to suffer and always works to save lives,” Muhyiddin said.

Former Prime Minister Mahathir Mohamad urged Muhyiddin to step down and said his unelected government, which took power in March 2020, has failed. Echoing other lawmakers, he said the parliamentary session was a sham because debates and voting weren't allowed.

“If this government has really failed, then it is time for the prime minister to step down and we need the forum to vote on this,” another lawmaker, Gobind Singh, said earlier.

Analysts say the end of the emergency was not unexpected as the king wasn't likely to agree to an extension. The annulments will also help Muhyiddin avoid parliamentary votes on those ordinances that could be seen as a test of support for his leadership, said Oh Ei Sun, a senior fellow at the Singapore Institute of International Affairs.

With no voting allowed in the session, Oh said it "summarily reduces Parliament to worse than rubber-stamp role.”

The biggest party in Muhyiddin's ruling alliance has withdrawn its support for him for failing to tackle the pandemic, but the attorney-general said Muhyiddin would remain in power until it can be proven in Parliament that he lost majority support.

There was an uproar at the end of Monday's session as Muhyiddin, who was supposed to answer questions raised by lawmakers, was absent. “Where's the PM? Where's the PM?” opposition lawmakers shouted. Instead, the finance minister handled the closing session and dodged answers related to the emergency.

Muhyiddin became prime minister after initiating the downfall of the reformist government that won the 2018 elections. His Bersatu party formed an unstable alliance that includes the United Malays National Organization, which was ousted in the 2018 polls. UMNO is the largest party in the alliance but has been unhappy at playing second fiddle to Bersatu and opposes the emergency declaration.

The five-day session of the lower house is being held under strict virus-prevention measures, with lawmakers masked and separated by transparent screens.

House Speaker Azhar Azizan Harun said the number of lawmakers may be restricted after two lawmakers and 12 parliamentary staff tested positive for the virus over the weekend. He said more than 60 people, including up to six lawmakers, who are close contacts are quarantined.