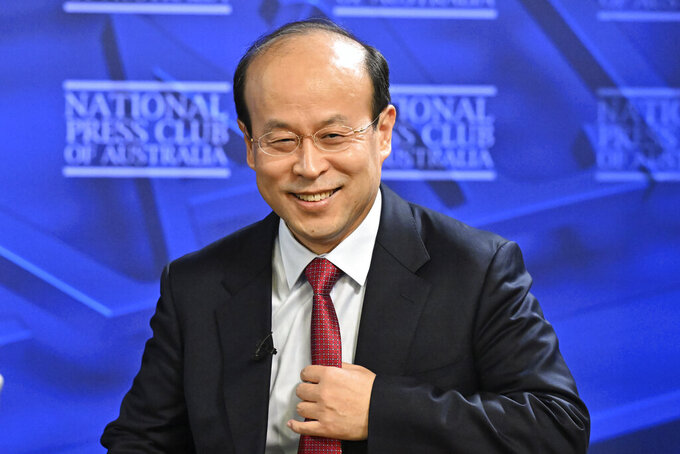 Mick Tsikas, ASSOCIATED PRESS
Chinese Ambassador to Australia, Xiao Qian, speaks at the National Press Club in Canberra, Australia, Wednesday, Aug. 10, 2022. Australia’s recent change of government was a chance to “reset” its troubled relationship with China, but the new administration must “handle the Taiwan question with caution,” a Chinese envoy said on Wednesday. (Mick Tsikas/AAP Image via AP)

CANBERRA, Australia (AP) — Australia’s recent change of government was a chance to “reset” its troubled relationship with China, but the new administration must “handle the Taiwan question with caution,” a Chinese envoy said on Wednesday.

Chinese Ambassador to Australia Xiao Qian said he was “surprised” that Australia had signed a statement with the United States and Japan that condemned China’s firing of missiles into Japanese waters in response to U.S. House Speaker Nancy Pelosi’s visit to Taiwan last week.

“We hope that the Australian side could take China-Australia relations with serious attitude. Take the ‘One China’ principle seriously, handle the Taiwan question with caution,” Xiao told the National Press Club.

Xiao would not say when the live-fire military exercises near Taiwan might end. He said an announcement would be made at a “proper time.”

China wanted a peaceful reunification with Taiwan, which Beijing considers a self-governing province, but Xiao did not rule out use of force.

“We can never rule out the option to use other means. So when necessary, when compelled, we are ready to use all necessary means,” Xiao said. “As to what does it mean by ‘all necessary means?’ You can use your imagination.”

“In the past few years, China-Australia relations have experienced serious difficulties for reasons caused by the Australian side,” Wang said.

Beijing has eased a ban on minister-to-minister contacts with Australia since Prime Minister Anthony Albanese’s government was elected in May. The two countries’ defense and foreign ministers have since had face-to-face meetings.

Chinese Premier Li Keqiang wrote to congratulate Albanese on his election and Albanese had replied.

China would discuss with Australia whether conditions were right for a meeting between Albanese and Chinese President Xi Jinping in November when the leaders are in Indonesia for a Group of 20 summit.

“As ambassador, I’m hoping for the best and I’m going to try to make all my efforts toward that direction,” Xiao said.

Xiao said the new Australian government had made a good start to its relationship with China after a “difficult time for a couple of years.”

“But it’s a good start only. There’s a lot to be done to really reset this relationship,” Xiao said.

Albanese has urged China to demonstrate good faith toward the new government by lifting a series of official and unofficial trade barriers that is costing Australian exporters tens of billions of dollars.

Xiao defended the barriers and pointed to the economic damage Australia had caused Chinese-owned telecommunications giant Huawei by banning it from rolling out the country’s 5G network due to security concerns.

Acting Prime Minister Richard Marles, who is filling in while Albanese is on vacation this week, was undeterred by the hostile Chinese reaction to Australia’s criticisms of the military response to Pelosi’s visit.

“China is going to say what China says. We control our end of this equation. And in describing that end, it’s this: We will engage with the world with respect, with professionalism, with sobriety, with a faith in diplomacy,” Marles said Wednesday.