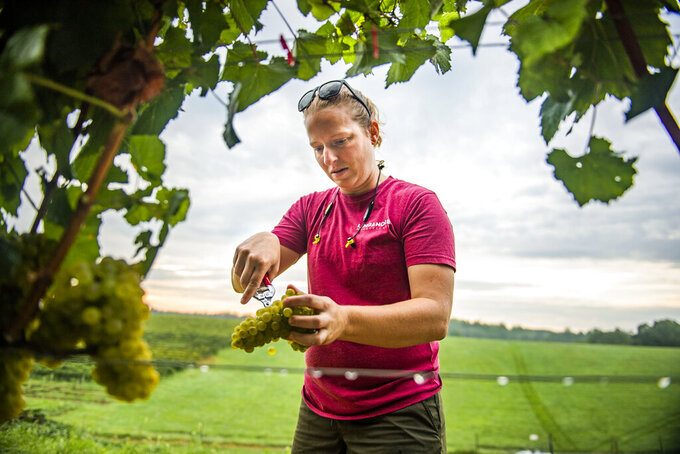 Katina Zentz, ASSOCIATED PRESS
Chief grape picker and third-generation winemaker Melissa Aellen harvests Chardonnay grapes in the vineyards of Linganore Winecellars in the early hours of Tuesday morning, Aug. 31, 2021. Planted three years ago, these vines are located at the new block of Chardonnay plants and will allow for the winery to make a different style of Chardonnay wine that is fermented in stainless steel. (Katina Zentz/The Frederick News-Post via AP)

MOUNT AIRY, Md. (AP) — As a hazy mist rose out from the hills along a Mount Airy vineyard and the early-morning skies radiated a soft pink glow, only the hustling of grape-pickers could be heard in the otherwise silent terrain.

The grapes gathered on this picturesque late-summer morning were chardonnay, and they were part of Linganore Winecellars’ 45th harvest.

Linganore is among the more than dozen local wineries whose workers have taken to the vines for this year’s harvest. For the next several weeks they’ll help provide inventory for one of Frederick County’s most popular tourism draws: craft beverages.

Frederick leads the state with 30-plus wineries, breweries and distilleries combined, according to the local economic development office. The county is home to the first farm brewery, first meadery and first cidery in The Free State, as well as the largest winery — Linganore — and largest brewery, Flying Dog. Moreover, Thurmont is home to Maryland’s first craft beverage “trifecta,” with Springfield Manor offering wines, beers and spirits.

But last week, at the Mount Airy vineyard, it was all about the grapes. Linganore’s staff stood in the vineyards donning T-shirts, shorts and rubber boots, fully prepared for the hours of labor ahead. With bright yellow crates resting on the grassy field saturated with the morning dew, cellar hands dropped the green-skinned grapes into the bins.

In the new chardonnay block of the vineyard, the plants are just three years old and weigh around five pounds. Winery representatives said the young vines will allow Linganore to create a new style of chardonnay that is fermented in stainless steel rather than the traditional barrel fermentation for the grapes found in their Chardonnay Reserve 2020 wine.

As harvesters promptly cut the stem from the vine, occasionally they taste tested a stray grape to ensure quality. Wine grapes are generally twice as sweet as table grapes and are filled with a delicious, sugary flavor, workers said. Through the winemaking process, the taste will turn into the delicate, dry sweetness Linganore’s chardonnay has become known for.

“When planted, (the vines) will keep producing for the next 40 years, so you only have to plant them once in a lifetime,” said Vineyard Manager Eric Aellen.

Preparing for rainy weather ahead, Linganore workers made the new chardonnay harvest a priority. Heavy rain can create problems for the roots of the plants if they become overly wet.

But with the sun peeking out through the painted clouds, the harvest proved successful, with bountiful clusters of local fruit filling the harvest bins.

Other Frederick County wineries like Loew, Catoctin Breeze and Black Ankle have touted their harvesting efforts on social media. Loew was recently picking its gruner veltliner, a white varietal native to Austria, and Black Ankle kicked off its harvest with sauvignon blanc.

Black Ankle officials praised its vineyard crew for providing “the foundation” for everything the winery does.

“Every year (Catoctin Breeze Vineyards) offers its patrons the opportunity to aid in one of the most important steps in creating a wine, that being picking of the grapes themselves,” the winery noted on Facebook. “We feel that this tradition builds a sense of community and belonging amongst our Cru as they are contributing to the lasting legacy we seek to create.”