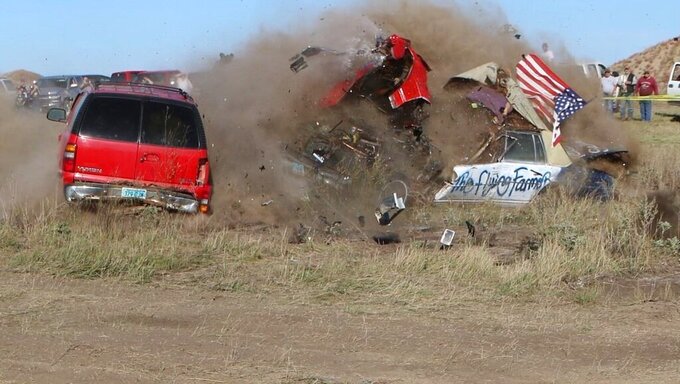 Hunter Andes, ASSOCIATED PRESS
Daredevil John Smith, known as the Flying Farmer, crashes his Chevrolet Caprice while attempting a jump on Saturday, Sept. 25, 2021 in Makoti, N.D. He suffered unknown injuries and was flown to a Minot hospital. (Hunter Andes/The Bismarck Tribune via AP)

MINOT, N.D. (AP) — A North Dakota stuntman known as the Flying Farmer has been moved out of intensive care after a dramatic crash on his first car jumping attempt in five years, his family said Monday.

John Smith, 57, was injured Sunday when his car corkscrewed off the ramp and rolled. He was eventually taken by medical helicopter to a Minot hospital.

His daughter, Amanda Smith, told The Bismarck Tribune that her father was scheduled to undergo surgery Monday for what she called “a huge slice” in his upper left arm and shoulder. He could be released sometime this week, she said.

Smith, who farms near Makoti in western North Dakota, said he was inspired by the motorcycle daredevil Evil Knievel. Smith has gained notoriety for his jumps at fairs and other attractions across the state. He has performed more than 100 jumps, including onto a frozen lake.

Sunday's event was billed as a competition between Smith and his son, Brian Smith, 36, to see which one could fly a car the farthest. Brian Smith's jump was successful, clearing about 90 feet (27 meters).

When John Smith arrived at the hospital, he could not recall what happened. After a nurse filled him in, his daughter said he replied, “Then I guess the kid beat me.”