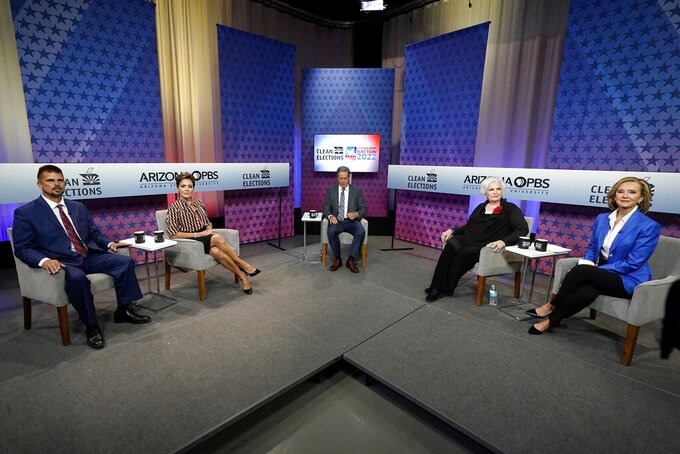 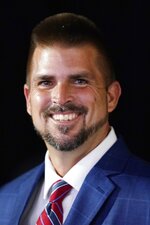 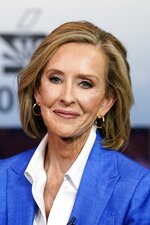 PHOENIX (AP) — Development attorney Karrin Taylor Robson called for leaving behind the 2020 election and focusing on the future while former news anchor Kari Lake doubled down on the lie that former President Donald Trump lost because of fraud as the Republican candidates for governor squared off in a raucous debate Wednesday.

Robson gave a nod to the widespread belief among Republican primary voters that something was amiss in 2020 and refused to say whether she would have certified the results, but she stopped short of saying the election was fraudulent. She said Democrats are focused on the future, and Republicans should be too.

“I believe the elections weren’t fair,” Robson said. She accused “liberal judges” of changing the rules late in the cycle and the media and big tech of suppressing conservative voices.

“But I am focused on 2022 because the left is 10 steps ahead of us,” she said. “I will do everything I can to ensure Arizona is in Republican hands for the 2024 election when we can take back the White House.”

Lake, who was endorsed by Trump and has focused much of her campaign on the lie that the 2020 election was marred by fraud, said she would not have certified what she called a “corrupt election.”

President Joe Biden "lost the election and he shouldn’t be in the White House,” Lake said.

Lesser-known candidates Scott Neely and Paola Tulliani Zen agreed with Lake that the election was “corrupt.”

Federal and state election officials and Trump’s own attorney general have said there is no credible evidence the election was tainted. The former president’s allegations of fraud were also roundly rejected by courts, including by judges Trump appointed.

The race is taking clearer shape with one week to go before early voting begins. Polling has shown Lake leading for the entirety of the campaign, but former U.S. Rep. Matt Salmon's decision Tuesday to drop out could shake things up and give Robson a boost in a one-on-one race against Lake. Salmon threw his support to Robson hours before the debate on Wednesday.

All four contenders began throwing barbs almost immediately and continued throughout the hourlong debate. The candidates talked over and constantly interrupted one another.

“We need a leader with a record of accomplishment, not a career talker with the teleprompter,” Robson began, taking a dig at Lake's 27-year career in television news. She repeatedly called her leading rival “Fake Lake.”

Under repeated questioning from debate moderator Ted Simons of Arizona PBS, Robson agreed that she does not represent a radical change from outgoing Republican Gov. Doug Ducey. She said Arizona has posted a strong recovery from the economic downturn brought on by the pandemic and spoke supportively of his COVID-19 policies.

“In hindsight, when you see that he angered as many people on the left as the right, he probably got it about right,” Robson said.

Lake, by contrast, said Ducey kept businesses closed for far too long and should not have allowed local governments to require masks.

“Eventually we realized that this is destroying our economy, hurting people and we didn’t need to have those masks,” Lake said.

Salmon dropped out this week after determining he had no chance of pulling out a victory in the GOP primary, and said he did not want to drain votes from Robson.

“I'm going to work my tail off to get Karrin Taylor Robson elected as governor of Arizona because I actually believe that with all the challenges that we have as a state ... we can't afford to get it wrong," he said on KTAR radio’s Mike Broomhead show.

Salmon ticked off major campaign issues such as border security, K-12 education and water supplies that he said were “incredibly existential issues to us as a state.”

"And I believe that we've got to have somebody that actually has a track record of getting things done," Salmon said. “And somebody we can trust as a real true conservative like Karrin Taylor Robson.”

This story has been updated to correct the last name of debate moderator Ted Simons.