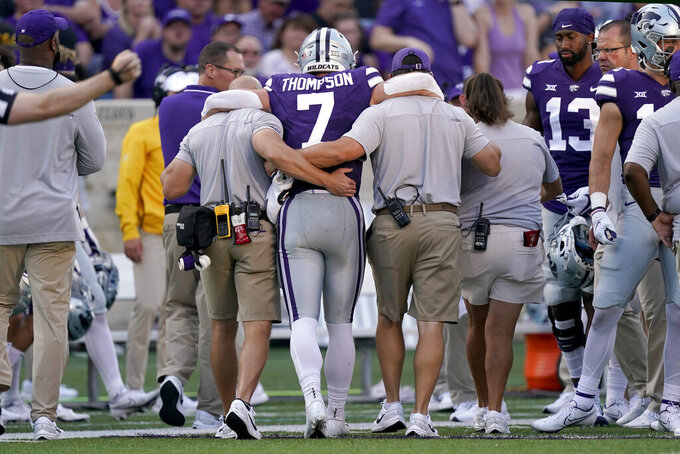 Charlie Riedel, ASSOCIATED PRESS
FILE- In this Saturday, Sept. 11, 2021, file photo, Kansas State quarterback Skylar Thompson (7) is helped off the field after getting injured in the first half of an NCAA college football game against Southern Illinois in Manhattan, Kan. Thompson was having a good start to his sixth year in Kansas State's program before a knee injury that will keep him out indefinitely. (AP Photo/Charlie Riedel, File)

MANHATTAN, Kan. (AP) — Nevada has never made the pilgrimage to the plains to face Kansas State in football until this season.

That doesn't mean coach Jay Norvell doesn't know what the Wolf Pack are about to face Saturday.

Norvell played for longtime Wildcats coach Bill Snyder at Iowa in the 1980s, then tried to match wits with him during stints at Iowa State, Nebraska, Oklahoma and Texas. And while Chris Klieman is now running the show in Manhattan, that hasn't changed the admiration Norvell has for a football program that tends to punch well above its weight.

“I've known Chris for many years. I have a lot of respect for how they go about their business,” Norvell said. “They're very well-coached, fundamentally sound, they play extremely hard, they play good defense and they're really good offensively.”

Well, the Wildcats (2-0) were all those things in a season-opening win over Stanford.

They weren't quite to that standard in squeaking by Southern Illinois last weekend.

Some of that was due to the loss of quarterback Skylar Thompson to a knee injury, which at first was thought to be season-ending but now has the Wildcats hopeful he will return at some point this season. But when Thompson went down, Kansas State looked lost behind backup quarterback Will Howard, whose only touchdown pass of the game went to the Salukis.

“He's going to play and prepare like I know he will be able to do,” Klieman said, pointing out that Howard played most of last season, when Thompson was lost to a shoulder injury. “Everybody needs to raise their level of play when you lose a really good player like Skylar. It's next man up. But the positions around those guys, they need to raise their level of play.”

Especially given the Wolf Pack (2-0) are every bit as good as anyone in the Big 12.

They've already won their first road game against a Power Five school in nearly a decade when they beat California, and they blew out lower-level Idaho State last weekend. They have one of the nation's best quarterbacks in Carson Strong, a potential first-round draft pick, and return a bevy of players who have been to three consecutive bowl games.

They also have a coach who knows what it takes to beat Big 12 teams.

“I've had an opportunity to coach in Manhattan,” Norvell said, “and I know what a great atmosphere it is there. The students come rushing into the stadium when they open the gates and they put them behind the visiting bench with the band. I just have a lot of respect for the K-State program and what they've done.”

WHERE THERE'S A WILL

Howard was just 8 of 17 for 76 yards with an interception against Southern Illinois, but he fared better at times during his freshman season. He threw for 1,178 yards with eight touchdowns and 10 interceptions.

“I’m not putting any extra pressure on myself,” Howard said. “We know we have to play some really good football. We can’t have those mistakes that we made last week. We know that and we are working on it.”

The Wildcats won last week despite committing four turnovers against the Salukis. And you can bet Klieman and Co. know they won’t be able to replicate that feat against the Wolf Pack, who caused Idaho State to cough up the ball three times.

Strong already has thrown for 693 yards and six touchdowns through the Wolf Pack's first two games. He paced the Mountain West last season with 2,858 yards and 27 touchdown passes in leading Nevada to a 7-2 record.

“We haven’t played a team that throws the ball as much as they do," Kansas State defensive tackle Jaylen Pickle said.

While the Wolf Pack prefer to throw the ball in their up-tempo offense, they have proven they have the ability to find some balance, too. They ran the ball 26 times against Cal and Toa Taua had 103 yards rushing against the Bengals.

Kansas State running back Deuce Vaughn earned a reputation for being quick and elusive, particularly in the open field, but he showed with three rushing touchdowns in short yardage last week that he can pound the ball between the tackles.

“What a tremendous back he is," Norvell said. “Very talented young man.”