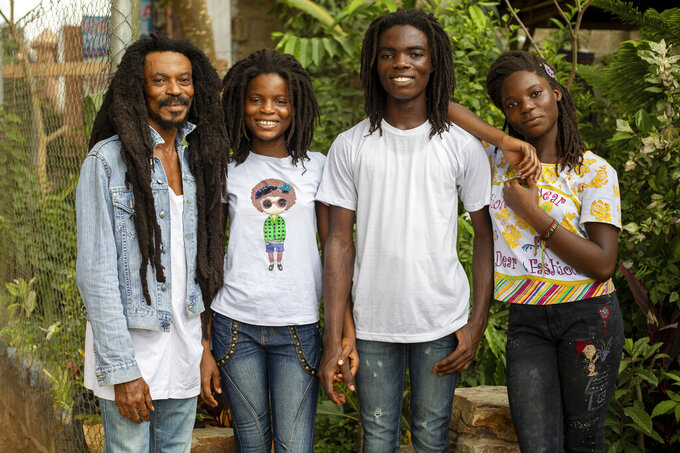 Nipah Dennis, ASSOCIATED PRESS
From left, Tereo Awareness Marhguy, Nikita Hive Marhguy, 17, Tyrone Iras Marhguy, 17, and Amrita Sheeba Marhguy poses for a photograph at their home in Accra, Ghana, Sunday, Oct. 10, 2021. An official at the academically elite Achimota School in Ghana told Tyrone he would have to cut his dreadlocks before enrolling. For Marhguy, who is a Rastafarian, cutting his dreadlocks is non-negotiable so he and his family asked the courts to intervene. (AP Photo/Nipah Dennis)

Tyrone Iras Marhguy had to make a difficult decision after being accepted to the high school of his choice: his faith or his education.

An official at the academically elite Achimota School in Ghana told the teen he would have to cut his dreadlocks before enrolling. For Marhguy, who is a Rastafarian, cutting his dreadlocks is non-negotiable so he and his family asked the courts to intervene.

“I manifest my faith through my hair,” Marguy, 17, told The Associated Press. “I assume it to be like telling a Christian not to read the Bible or go to church.”

Hair is an important part of the Rastafarian faith; believers grow their hair out naturally in locks in obedience to Biblical commandments. It is a public symbol “that we have made a vow,” said Tereo Kwame Marhguy, who is Tyrone’s father.

Although many Rastafarians believe in the Bible, it is a distinct religion guided by unique practices including the adherence to a strict Ital vegetarian diet, the use of cannabis for spiritual purposes and the avoidance of alcohol.

Short hair is a requirement at the Achimota School, a co-ed public institution in the northern outskirts of Ghana’s capital, Accra. The school did not respond to the AP’s repeated requests for comment, but argued in court documents that all boys, regardless of their religion, must “keep hair low and neatly trimmed.”

The school was founded nearly a century ago during British colonial rule. Among its alumni are many of Ghana’s social and political elite, including four former presidents, as well as the former presidents of Zimbabwe and Gambia.

Unhappy about the school’s reluctance to accommodate their son’s beliefs, the Marhguys sued Achimota School and the government in March. A separate suit was filed by another Rastafarian student, Oheneba Kwaku Nkrabea, who was also denied admission to the school.

The Marhguys’ ongoing case is one of many instances in which Ghana’s public high schools, mostly started by Christian missionaries during and after European colonization, have become a battleground for the fight for religious tolerance. In a separate incident earlier this year, a Muslim student was prevented by school authorities from fasting during Ramadan, Islam’s holiest month.

Ghana, a majority-Christian country, prides itself as democratic and religiously tolerant in a region plagued by interreligious conflicts. Government and faith leaders have signaled their commitment to religious harmony, including recent financial donations by top officials, who are Muslim, to church building projects.

For the Marhguys, the case highlights the discrimination Rastafarians face in Ghana, where they are a small but visible minority. They hope that with the attention the case has received, local attitudes will become more tolerant.

A high court judge ruled in May that the school’s ultimatum “amounts to an illegal and unconstitutional attempt to suspend the manifestation of the applicant’s constitutionally guaranteed freedom to practice and manifest his religion,” according to court documents viewed by the AP.

While the school has admitted Tyrone with his uncut hair into its science program, the school and Ghana’s attorney general have commenced legal proceedings in the Court of Appeal to reverse the earlier ruling.

The attorney general and the information ministry did not respond to repeated attempts by the AP for an interview.

The legal standoff, fronted by the attorney general, has raised questions about the country’s self-image as the region’s most stable democracy.

Despite being offered a scholarship to study at a private school where he wouldn’t be required to cut his hair, Tyrone, with the support of his family, has chosen to stay at Achimota School. Nkrabea, the other student -- who also won his suit against the school -- has however taken the scholarship.

The Marhguys believe they have been divinely chosen to keep fighting the school so no other student has to pick between their faith and their education again.

“They have done it to other people before and they just kept quiet and walked away,” said Tereo Marhguy. “Jah, the Most High has given us the authority and the strength to do it.”