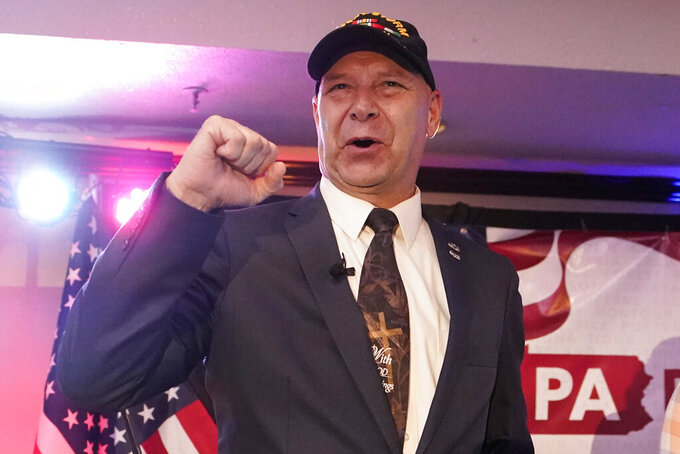 HARRISBURG, Pa. (AP) — Fallout from last week's primary election has been playing out in the Pennsylvania General Assembly in recent days, including punishment for two lawmakers who worked to unseat fellow incumbents.

In the Senate, GOP gubernatorial nominee Sen. Doug Mastriano was allowed back inside the Republican caucus’ closed-door meetings Monday. Mastriano, R-Franklin, had been kicked out last year after leaders concluded he had shared information that was supposed to be confidential.

“It was a leadership decision,” said Jason Thompson, spokesperson for President Pro Tempore Jake Corman, R-Centre, who had sought the nomination against Mastriano. “There are members of the caucus that requested that he be added back to caucus discussions. We evaluated that, our leadership team evaluated that, and made the decision to add him back.”

Thompson said Mastriano was made aware of the decision several weeks ago, but Monday was the first caucus to be held since then. A message seeking comment from Mastriano was left Tuesday with his Capitol staff.

Saylor's loss to Wendy Jo Fink creates an opening for an ambitious colleague, as the majority chair of Appropriations holds considerable sway over state budget spending decisions. So far there's no sign House Republicans will move to replace Saylor before his term ends later this year.

Senate Republicans could face a similar issue because Appropriations Chairman Pat Browne, R-Lehigh, is locked in a tight primary race for the nomination and may lose reelection.

The state budget, due July 1, will be the main focus of state lawmakers over the coming five weeks. Appropriations chairs control much larger staffs and spending than do rank-and-file members.

Dozens of incumbents chose not to seek another term this year after the once-a-decade redistricting process made changes to district maps across the state.

In the Philadelphia suburbs, the Pocono Mountains, the Pittsburgh area and Reading, campaign strategists are poring over primary results to see what they suggest about the fall campaign. Republicans hold solid majority margins in both chambers, but legislative redistricting is generally expected to give Democrats a boost in what otherwise is shaping up to be a national political environment favorable to the GOP.