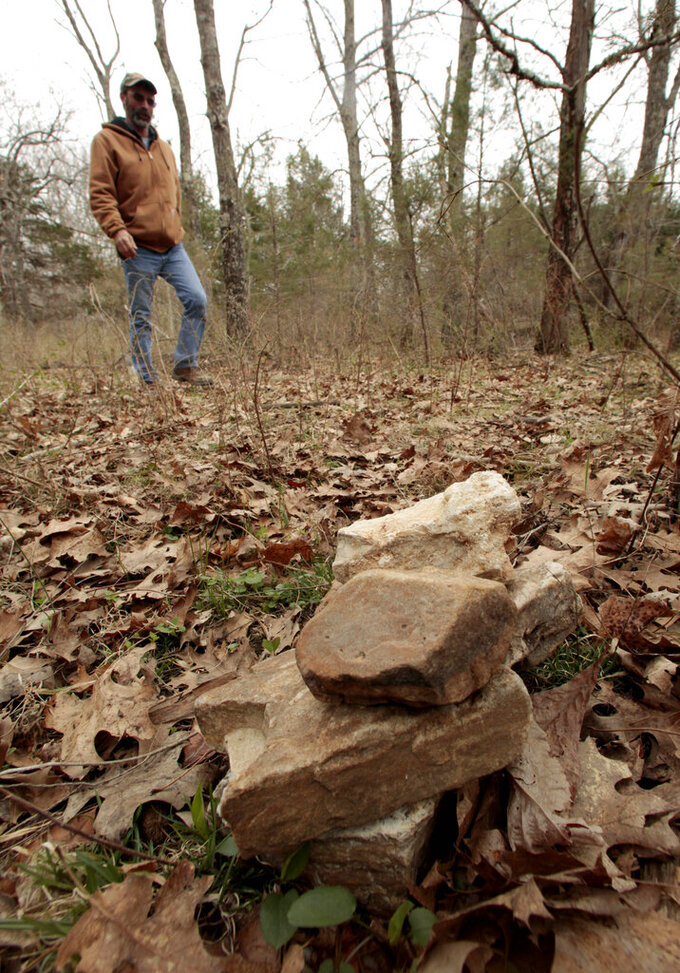 Charlie Riedel, ASSOCIATED PRESS
FILE - Andy Justice walks to a pile of rocks on land he farms about two miles east of Plato, Mo., on March 24, 2011. The rocks were placed there by a government survey crew to mark the population center of the United States according to the 2010 census. The U.S. Census Bureau on Tuesday, Nov. 16, 2021, is announcing where the new population center of the U.S. is located, an event that take places every 10 years after the once-a-decade census shows where people are living. The center of the U.S. population distribution has been located in Missouri since 1980, and chances are that won’t change.(AP Photo/Charlie Riedel, File)

America is about to find out where its heart is.

The U.S. Census Bureau on Tuesday is announcing where the new population center of the U.S. is located, an event that take places every 10 years after the once-a-decade census shows where people are living. The center of the U.S. population distribution has been located in Missouri since 1980, and chances are that won’t change.

Somewhere in Wright County in the Missouri Ozarks is the likeliest candidate, according to calculations by urban planner Alex Zakrewsky, who accurately predicted the current titleholder a decade ago. The county seat is Hartville, Missouri.

Since the first U.S. census was taken in 1790, and Chestertown, Maryland was declared the center of the young nation, the country’s heart has been calculated after each census, shifting southwestward through Ohio, Indiana, Illinois and Missouri as more people moved to Sun Belt states and immigrated from the southern border.

If Zakrewsky’s theory proves true, the center will have moved only 12.8 miles southwest of Plato, a tiny village in the Missouri Ozarks which was designated the heart of the U.S. a decade ago following the 2010 census.

Such a lackadaisical journey to the neighboring county would reflect a slowdown in the movement of the nation's center from 2010 to 2020 compared to other decades, said Zakrewsky, who is principal planner for Middlesex County, N.J.

It may turn out to be the slowest or second slowest advance, vying with the 13-mile shift between 1910 and 1920 when European immigration to northeastern cities counterbalanced the westward and southern expansion. By comparison, between 1850 and 1860, the great migration west moved the center 103 miles, from West Virginia to Ohio.

“An aging population, ongoing economic difficulties, and the impact of the pandemic have worked to reduce the means and reason for Americans to move," Zakrewsky said.

To calculate the center of the U.S., the Census Bureau figures out which spot would be “the balance point" if the 50 states were an imaginary, flat surface with weights of identical size placed on it so that each weight represented the location of one person.

Plato, located south of Fort Leonard Wood in the Missouri Ozarks, had a population of 82 people last year, about a quarter fewer residents than a decade ago when then-Census Bureau director Robert Groves paid the village a visit to help celebrate its status.

But don't expect to find T-shirts or coffee mugs celebrating that designation in any local stores, or any regrets as Plato loses this claim to fame. Most folks in Texas County, which is home to Plato, have no idea they're at the center of the U.S., said Scott Long, the presiding commissioner of Texas County, where beef cattle outnumber people.

“I don't think it has changed the day to day lives of the people of this county, but I don't want to say that in way that means we don't care," Long said. “It's one of those things most people don't even know."