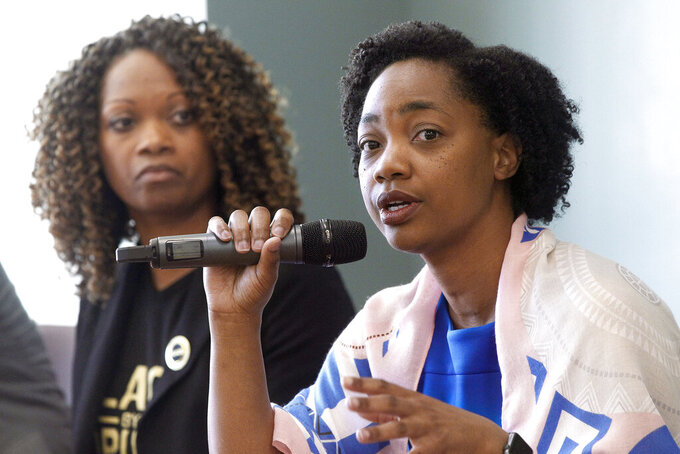 SAN DIEGO (AP) — The daughter of California Secretary of State Shirley Weber was leading Tuesday in a special election to fill Weber's vacant seat in the state Assembly.

Dr. Akilah Weber had 52.7% of the early ballot returns.

Republican small business owner Marco Contreras, who raised the second-most campaign money behind Weber, was in second place in what is considered a safe Democratic district.

Weber was one of five candidates running in the San Diego area’s 79th Assembly District after her mother resigned in January to succeed Alex Padilla as the state’s top elections official. Padilla, in turn, left when he was appointed to the U.S. Senate to replace Vice President Kamala Harris.

Weber is an OB-GYN with Rady Children’s Hospital and UC San Diego Health, and a La Mesa councilwoman.

Unions supported labor leader Leticia Munguia, another Democrat, with their own independent expenditures.

Munguia was backed by the California Latino Legislative Caucus and several members, including Assemblywoman Lorena Gonzalez of San Diego. She is a labor organizer with American Federation of State, County & Municipal Employees District Council 36.

School teacher Shane Suzanne Parmely and restorative justice consultant Aeiramique Glass Blake were the other two Democrats running in a district that includes part of San Diego and its eastern suburbs, where 45% of voters are registered Democrats and 22% are Republicans outnumbered by the 26% who have no party preference.

If no candidate wins more than half the vote, a special runoff election will be June 8 with the top two vote-getters regardless of their party affiliation.