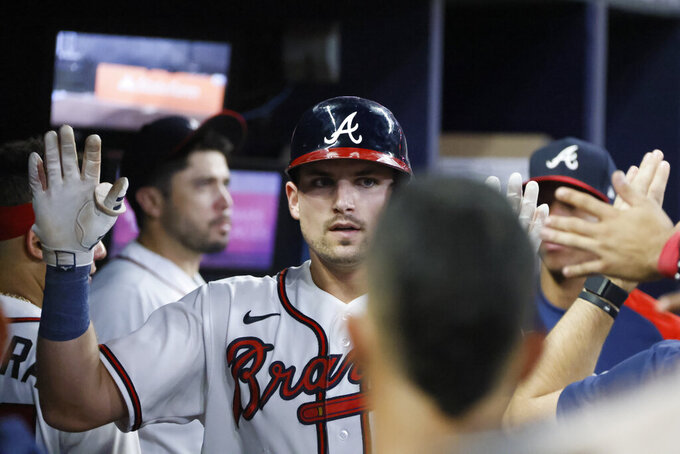 ATLANTA (AP) — Robbie Grossman drew a tiebreaking bases-loaded walk against Steven Okert in the ninth inning, bailing out closer Kenley Jansen and giving the Atlanta Braves a 2-1 victory over the Miami Marlins on Saturday night.

Matt Olson singled to begin the ninth to break an 0-for-22 skid and advanced to third on Michael Harris II’s double. After Okert (5-2) intentionally walked Vaughn Grissom to load the bases and pinch-hitter Travis d’Arnaud lined out against a five-man infield, Grossman took drew the walk to win it.

“I had a great idea that Grossman was going to get walked," Harris said. “He has a good eye up there. He did a good job at the plate and helped us win."

Said Okert, “Very frustrating. It was a great effort from the team today. Just terrible from me."

The Marlins took their 30th one-run loss of the year, most in the majors.

Jansen, who leads the majors with 31 saves but has struggled in giving up five total earned runs in his last four appearances, began the top of the ninth by giving up a leadoff bloop single to Nick Fortes and a clean single to Brian Anderson before JJ Bleday walked with no out.

After Jerar Encarnacion hit sacrifice fly to tie it the score at 1, home plate umpire Mark Ripperger was injured on a foul ball and a 10-minute delay ensued. Jansen was replaced by Tyler Matzek (4-2) with a 2-2 count on Miguel Rojas and runners on first and second with two outs. Matzek retired Rojas on one pitch.

Jansen, who blew his sixth save opportunity, agreed with manager Brian Snitker's decision to take him out.

“Yeah, I’ve never been in that situation before, being down for so long, especially throwing a very stressful inning," Jansen said. “I’m going to respect the manager’s decision always."

As for his recent struggles, Jansen blames his delivery for being out of whack.

“I can’t get my cutter to the other side right now," he said. “We’re going to work our way through it. We’re not going to let this get my confidence down. Never. I’ve been in this situation so many times, and guess what?

“I looked bad but you’ve just got to continue to keep going and work through my delivery and get my delivery right. Once my delivery gets back on track, it’s going to be fine."

Riley went deep for the 35th time, one off the NL lead, to make it 1-0 in the fourth, his 439-foot shot landing in the second deck of the seats in left. It marked the second time in his career that Riley connected in four consecutive games, the last time coming from July 27-30 last year. His 73 extra-base hits are most in the majors.

The Braves have won four in a row and 19 of 24 to move a season-high 32 games over .500. They are within two games of the first-place New York Mets in the NL East.

Miami tied a season high with its sixth straight loss. The Marlins have been held to two runs or fewer in seven straight.

A.J. Minter faced the minimum in the seventh and Raisel Iglesias faced four batters in the eighth for Atlanta.

Elder, a rookie in his fourth stint with Atlanta this year, was recalled from Triple-A Gwinnett to start in place of Jake Odorizzi, who has arm fatigue. Elder gave up two hits and two walks with six strikeouts.

Marlins starter Edward Cabrera, who gave up one run and four hits in five innings, had not allowed a run in his previous three road starts, but Riley changed that with one swing, giving the Braves an NL-best 202 long balls this season.

“This guy is one of the better players in baseball," Braves manager Brian Snitker said. “With the makeup and everything that he has, it makes him even more valuable."

Before Encarnacion’s sacrifice fly, the Marlins were 0 for 16 with runners in scoring position dating to the seventh inning Tuesday against Tampa Bay, and 2 for 31 since Aug. 28.

Marlins: INF Jon Berti, the major league leader in stolen bases with 32, missed his second straight game with a sore hip. With a day off Monday, Berti could miss Sunday’s game to get five straight days off before Miami begins a three-game series at Philadelphia.

Braves: Snitker said Odorizzi is not expected to miss another start and should be ready next weekend at Seattle. ... 2B Ozzie Albies took some grounders before the game as he continues to rehab a broken left foot. He is on a rehab assignment with Triple-A Gwinnett and went 2 for 3 before rain halted Friday’s game. ... RHP Mike Soroka (Achilles) pitched four scoreless innings in the same game, allowing one hit, striking five and issuing no walks.

Ripperger had a ball bounce off the top of his facemask and had to leave the game with two outs in the ninth. After being consulted by a Braves trainer, Ripperger walked off the field under his own power and was replaced behind the plate by Cory Blaser.