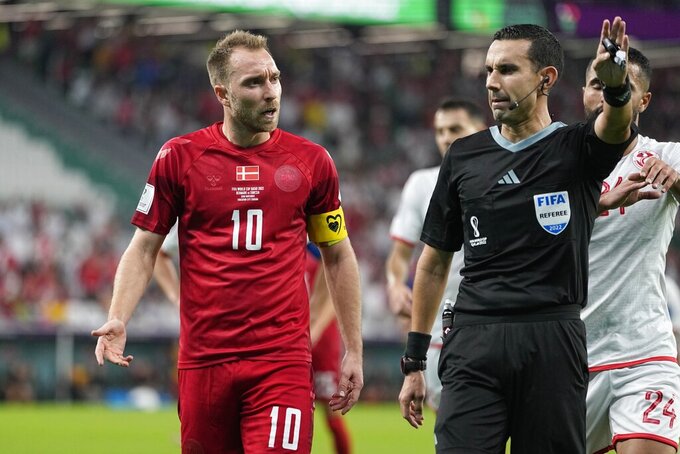 Denmark pledged it wouldn't vote for Infantino, who is running unopposed for re-election in March. Danish soccer federation president Jesper Møller also hinted at wishing to walk away from FIFA membership.

“I’ve thought about it again,” Møller told Danish media in Qatar. “I imagine that there may be challenges if Denmark opts out alone. But let’s see if we can’t have a dialogue.”

Denmark’s issues with the FIFA president pre-dated the World Cup, said Møller, who is a member of the UEFA executive committee, but the tensions with Europe intensified in recent days.

Infantino used an eve-of-tournament news conference to berate European society and media for what he said was hypocrisy in their criticism of World Cup host Qatar.

FIFA’s threats to show yellow cards to captains who wanted to wear an unauthorized armband as part of the “One Love” anti-discrimination campaign pushed seven European teams to climb down Monday hours before three were due to play games.

It was an unprecedented dispute at a World Cup pitting FIFA against players on the day of preparing for one of the biggest games in their careers.

At the Germany camp, officials said Tuesday they were considering a legal challenge to the FIFA tactics at the Court of Arbitration for Sport. The court has said no appeal was yet filed.

“We must respond to it,” Møller said. "We will get to that together with the other countries. We are in this together.”

Denmark also annoyed FIFA and Qatar with a team jersey design that drew attention to dissatisfaction with the host nation's record on human rights and treatment of migrant workers. The team has a third option of a black jersey, chosen as the “color of mourning” for laborers who have died in Qatar.

Infantino claimed over the weekend he was supported by more than 200 of FIFA’s 211 member federations to stand for re-election. Denmark and Germany have publicly said they will not vote for him.

The deadline for candidates was Nov. 16, days before the members met in Doha on Sunday, and no rival provided the five valid pledges of support required to stand. The election meeting is March 16 in Kigali, Rwanda.

Infantino was a long-time UEFA staffer and rose to be its general secretary when he was elected in 2016 to lead FIFA. His presidency has seen several disputes with former European colleagues on soccer politics issues and he has been living in Qatar ahead of the World Cup while also working more closely with Africa.