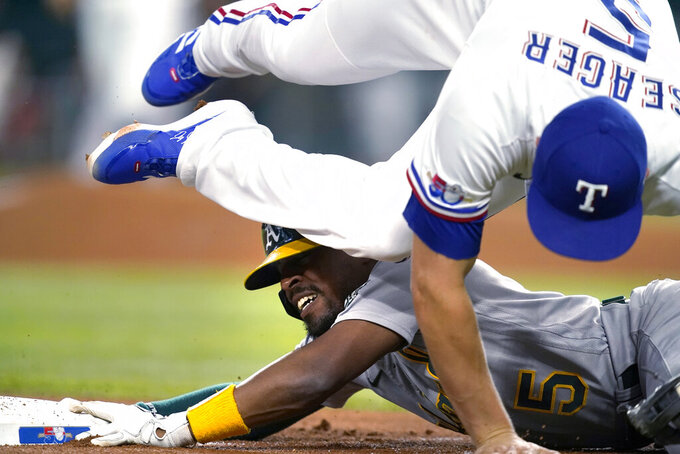 Tony Gutierrez, ASSOCIATED PRESS
Oakland Athletics' Tony Kemp holds on to third base as Texas Rangers shortstop Corey Seager falls over him while grabbing the throw during the first inning of a baseball game in Arlington, Texas, Tuesday, Aug. 16, 2022. Kemp advanced to third on a single by Seth Brown that also scored Cal Stevenson. (AP Photo/Tony Gutierrez) 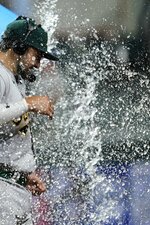 ARLINGTON, Texas (AP) — Shea Langeliers had no plans to give Elvis Andrus a hard time about overshadowing his big moment in front of the home folks.

Both hits were special for Oakland's rookie and veteran.

Langeliers doubled on the first pitch he saw in the big leagues, Andrus homered against his former team for the first time and the Athletics beat the Texas Rangers 5-1 on Tuesday night, ending a nine-game losing streak.

The Rangers had a three-game winning streak stopped a day after manager Chris Woodward was fired. Texas beat Oakland in Tony Beasley’s debut as interim manager hours after Monday’s move.

Andrus, who spent his first 12 years in the majors with the Rangers before a trade to Oakland going into last season, connected on a two-run shot in the seventh inning in his 31st game against Texas.

Langeliers grew up watching Andrus at shortstop while playing for a Dallas-area high school. Leading off the second inning to cheers from family and friends in the sparse crowd of 15,260, the 24-year-old lined Kohei Arihara's pitch down the left field line and scored the second Oakland run.

“First at-bat, you’ve got the jitters, you’re excited, nervous, all that stuff,” Langeliers said. “I felt like the only way to get past that was if he gave me a good first pitch to hit, I was swinging at it.”

Andrus' eight homer of the season and 87th of his career — the first 76 were with the Rangers — put Oakland up 5-1 after the Rangers had the potential tying runs on base the previous two innings.

“It was pretty, pretty good, since last year I wanted to do that for sure,” Andrus said. “So it felt really good. Being able to put that game away, it was even better.”

Oakland avoided a second 10-game losing streak this season, which hasn’t happened since the A’s were in Philadelphia in 1945.

Langeliers, who went to college about 100 miles south of the home of the Rangers at Baylor, was called up from Triple-A Las Vegas. The last-place A's released veteran outfielder Stephen Piscotty.

The ninth overall pick by Atlanta three years ago, Langeliers was acquired in the March trade that sent Matt Olson to the Braves. Debuting as the designated hitter with plans for him to be the backup catcher, Langeliers struck out his last three times up.

That first pitch mattered much more, though.

“I think it's great,” manager Mark Kotsay said. “I think anybody that gets to the big leagues and they see one pitch, they should be swinging, in my opinion. I thought it was great. I loved the aggressiveness.”

Arihara (0-1) allowed six hits the first time through the order in his first start for Texas since last September. The Japanese right-hander had spent the entire season with Triple-A Round Rock.

Pitching five days after his 30th birthday, Arihara settled down and tied his career highs of 5 2/3 innings and six strikeouts while allowing eight hits and three runs.

“I thought he threw the ball very well,” Beasley said. “I thought the first inning, he got the little base hits that just had eyes. He had some unfortunate things happen.”

Sears (4-0) had allowed five walks in 31 1/3 innings all season with the Yankees and A's when he walked the bases loaded with one out in the fifth. Sears escaped when right fielder Seth Brown made a running catch in foul ground on Marcus Semien's fly ball, and Leody Taveras got caught in a rundown between third and home.

The Rangers designated OF Elier Hernandez for assignment to make room for Arihara. Texas also recalled INF/OF Mark Mathias from Round Rock and optioned RHP Yerry Rodriguez to the Triple-A club. The Rangers signed C Wilson Ramos to a minor league contract with plans to assign him to Round Rock.

The A's called up 1B David MacKinnon along with Langeliers. They are the 53rd and 54th players for the A's this season, matching the Oakland record reached twice previously (2007, 2017). The A’s also placed center fielder Ramón Laureano on the injured list with left side soreness.

A's: All-Star RHP Paul Blackburn will miss the rest of the season with tendon damage in his right middle finger. A decision on surgery should come near the end of the season. Regardless, Blackburn is expected to be ready for spring training.

Oakland RHP Adam Oller (1-5, 7.26 ERA) and Texas LHP Cole Ragans (0-1, 4.82) are set for a matchup of rookies in the third game of the four-game series. Oller is on his fourth stint with the A's. Ragans is set for his third big league start.