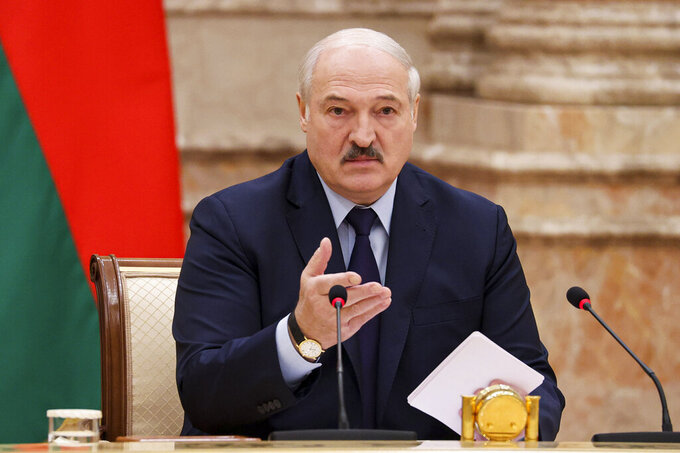 Maxim Guchek, ASSOCIATED PRESS
Belarusian President Alexander Lukashenko gestures as he speaks during an expanded meeting of the Constitutional Commission in Minsk, Belarus, Tuesday, Sept. 28, 2021. The authoritarian leader of Belarus announced a referendum on a new constitution in Feb. 2022 and promised not to let the opposition come to power. Alexander Lukashenko told a government meeting Tuesday he had drafted a new constitution that redistributes powers between the main branches of the government and establishes a new governing body, the All-Belarus People's Assembly. (Maxim Guchek/BelTA photo via AP)

MONACO (AP) — An investigation into two Belarus team officials who tried to force sprinter Krystsina Tsimanouskaya on a flight from the Tokyo Olympics will now be run by track and field authorities.

World Athletics said on Thursday its independent Athletics Integrity Unit is taking over the case from the International Olympic Committee. No timetable was given for the investigation.

The Belarus team’s treatment of Tsimanouskaya created a diplomatic incident at the Tokyo Olympics with Japanese authorities and Poland’s embassy coming to her aid.

Team officials Artur Shimak and Yury Maisevich were involved in taking Tsimanouskaya to the airport to send her home to Belarus after she criticized coaches on social media.

Tsimanouskaya sought help at the airport because she feared for her safety if she returned to Minsk. Within days, she and her husband got humanitarian visas to stay in Poland.

Belarus has been in turmoil amid a state-ordered security crackdown since August 2020 when authoritarian president Aleksander Lukashenko claimed a sixth term after an election widely viewed as rigged in his favor. The former Soviet republic has relentlessly pursued its critics.

Shimak and Maisevich continued to have contact with Belarus team members in Tokyo for four more days after the airport incident until the IOC withdrew their Olympic credentials.

IOC President Thomas Bach said in Tokyo it was a “deplorable case.”

The IOC last year banned both Lukashenko and his son Viktor from attending future Olympics after athletes said they faced reprisals and intimidation in the security crackdown.

Lukashenko led the Belarusian Olympic committee from the 1990s until this year when his son replaced him.

Still, the IOC had been urged for months ahead of Tokyo by activists in Belarus and international groups representing athletes to fully suspend the national Olympic committee. That would have let Tsimanouskaya and the rest of the 103-member Belarusian team compete in Tokyo as independents under the Olympic flag.

Tsimanouskaya had criticized her coaches for asking her to run in an event she had not trained for. She was needed to replace athletes ruled ineligible because of a substandard national anti-doping program.

World Athletics said its investigators in the Belarus case “will conduct the procedure, with the full collaboration and support of the IOC.”