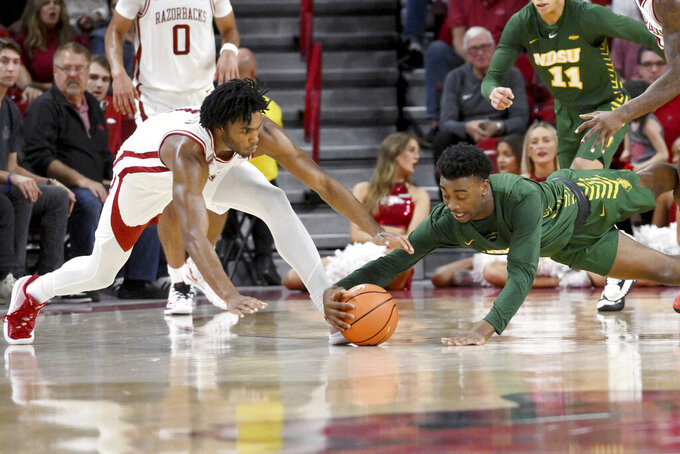 FAYETTEVILLE, Ark. (AP) — Trevon Brazile had 21 points and 12 rebounds in his debut with Arkansas, and the No. 10 Razorbacks beat North Dakota State 76-58 in the season opener for both teams Monday night.

Brazile, a sophomore transfer from Missouri, scored six straight points during an 11-0 run early in the second that gave Arkansas (1-0) a 16-point lead with 15 minutes left.

Wichita State transfer Ricky Council was the only other Arkansas player to score during the run. He led the Razorbacks with 22 points on 9-for-14 shooting.

“His energy when he had the ball was phenomenal,” coach Eric Musselman said. “He’s really, really good as a mid-range shooter. His 3-point shot, with his feet set, he can make 3 balls as well.”

Council is one of five players on the Arkansas roster who arrived via the transfer portal in the offseason. Another six players are freshmen, including one of the nation’s top recruits, Nick Smith Jr., who didn’t play for what was said pre-game as precautionary reasons due to a knee injury.

Smith, a 6-foot-5 combo guard, is a projected lottery pick in April. Musselman was asked three times about Smith’s status, but played coy, providing no timetable for his return nor the extent of the injury.

"He’s injured and everything is irrelevant other than the fact that we got Fordham coming in here,” Musselman said. “We’ll be fine. Next guy up. Whoever is healthy on Friday.”

Eight of the 10 Arkansas players who logged minutes Monday were not on the team last year. Davis and Council started alongside Makhi Mitchell (Rhode Island), freshman Anthony Black and Kamani Johnson, the team’s only other returning scholarship player from last season.

Arkansas’ talent level was too much for its Summit League opponent, even without Smith. Arkansas’ first test against a power-conference team won’t come until Nov. 21 at the Maui Invitational.

North Dakota State: Travels to No. 5 Kansas on Thursday.