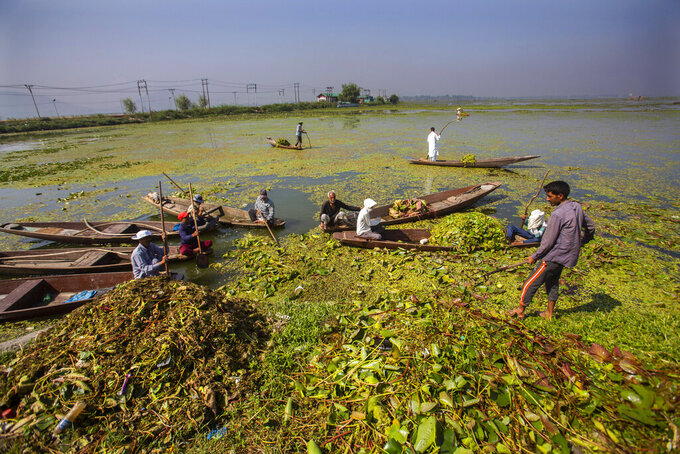 SRINAGAR, India (AP) — Boatman Noor Muhammad struggles to row as his boat moves deep into famed Dal Lake in Srinagar, the main city in Indian-controlled Kashmir. He presses hard on his oar to untangle the vessel from thick vegetation.

“It is very difficult to paddle through most of the lake,” he complains. He says authorities “spend a lot of money but they don’t clean it properly.”

Weeds, silt and untreated sewage are increasingly choking the sprawling scenic lake, which dominates the city and draws tens of thousands of tourists each year.

Dal Lake appears pristine in the area where hundreds of exquisitely decorated houseboats bob on its surface for rent by tourists and honeymooners. But farther from shore, the lake is a mixture of mossy swamps, thick weeds, trash-strewn patches and floating gardens made from rafts of reeds.

Research by the University of Kashmir in 2016 found that only 20% of the lake’s water was relatively clean while 32% was severely degraded.

At least 15 major drains in the city empty into the sprawling lake, contaminating it with sewage and pollutants like phosphorous and nitrogen, officials say.

Tariq Ahmad, a houseboat owner, says about 900 registered houseboats contribute only a “small fraction” of the pollution in the lake.

Officials insist they are doing everything possible to save the fast-degrading lake.

“This is an urbanized lake. We have to understand that there’s a huge amount of sewage in the lake,” Ahmed said.

More than a dozen mechanical dredgers are deployed to dig up silt and weeds, while hundreds of workers, some in small wooden boats, haul the fetid waste from the lake.

Environmentalists say efforts like de-weeding have helped, but more needs to be done to save the lake, especially from untreated sewage.

“If you’ve stopped the poison from one side and then you allow the poison to come from the other side, it really doesn’t make any sense,” said environmentalist Aijaz Rasool.