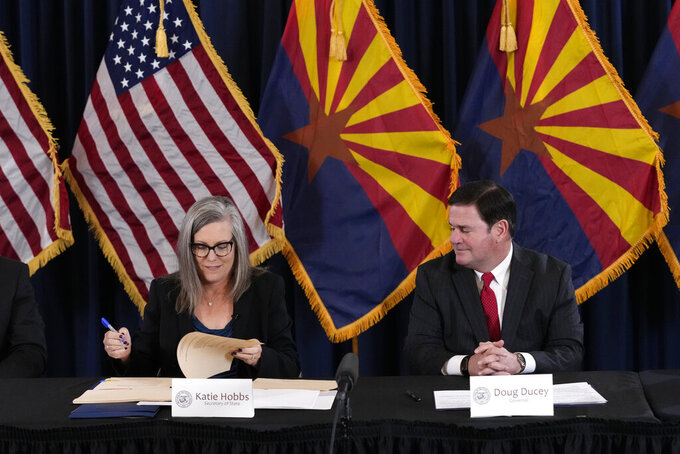 The certification opens a five-day window for formal election challenges. Republican Kari Lake, who lost the race for governor, is expected to file a lawsuit in the coming days after she's spent weeks of criticizing the administration of the election.

Election results have largely been certified without issue around the country, but Arizona was an exception. Several Republican-controlled counties delayed their certification despite no evidence of problems with the vote count. Cochise County in southeastern Arizona blew past the deadline last week, forcing a judge to intervene on Thursday and order the county supervisors to certify the election by the end of the day.

“Arizona had a successful election,” Secretary of State Katie Hobbs, a Democrat who beat Lake in the race for governor, said before signing the certification. “But too often throughout the process, powerful voices proliferated misinformation that threatened to disenfranchise voters.”

When the same group certified the 2020 election, Ducey silenced a call from then-President Donald Trump, who was at the time in a frenetic push to persuade Republican allies to go along with his attempts to overturn the election he lost.

“This is a responsibility I do not take lightly,” Ducey said. “It’s one that recognizes the votes cast by the citizens of our great state.”

Republicans have complained for weeks about Hobbs' role in certifying her own victory, though it is typical for election officials to maintain their position while running for higher office. Lake and her allies have focused on problems with ballot printers that produced about 17,000 ballots that could not be tabulated on site and had to be counted at the elections department headquarters.

Lines backed up in some polling places, fueling Republican suspicions that some supporters were unable to cast a ballot, though there's no evidence it affected the outcome. County officials say everyone was able to vote and all legal ballots were counted.

Hobbs immediately petitioned the Maricopa County Superior Court to begin an automatic statewide recount required by law in three races decided by less than half a percentage point. The race for attorney general was one of the closest contests in state history, with Democrat Kris Mayes leading Republican Abe Hamadeh by just 510 votes out of 2.5 million cast.

The races for superintendent of public instruction and a state legislative seat in the Phoenix suburbs will also be recounted, but the margins are much larger.

Once a Republican stronghold, Arizona's top races went resoundingly for Democrats after Republicans nominated a slate of candidates backed by Trump who focused on supporting his false claims about the 2020 election. In addition to Hobbs and Mayes, Democratic Sen. Mark Kelly was reelected and Democrat Adrian Fontes won the race for secretary of state.

This story has been corrected to show that Chief Justice Robert Brutinel was appointed by Gov. Jan Brewer, not Doug Ducey.