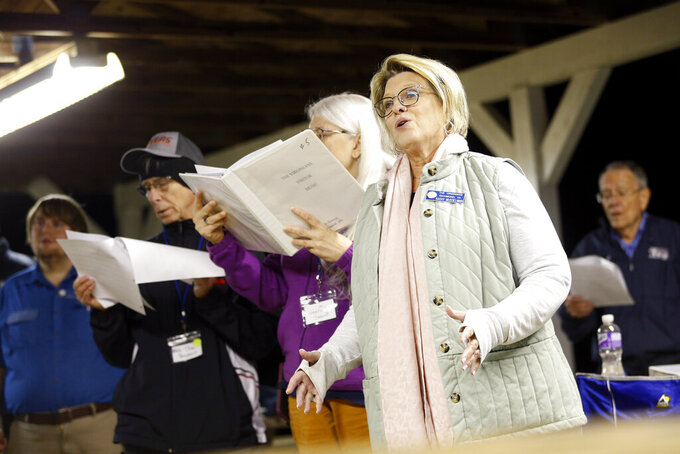 Eva Russo, ASSOCIATED PRESS
(From left) Connor Terrell, Tom Reichert, Debbie Brunett and Kathy Musselman rehearse with The Virginians, the local chapter of the national Barbershop Harmony Society, at Providence United Methodist Church on November 9, 2021. The Virginians is following the national group's lead and inviting women to join the group that's been only for men in its 80-year history. (Eva Russo/Richmond Times-Dispatch via AP)

RICHMOND, Va. (AP) — This is the time of year when the Virginians Barbershop Chorus usually would be putting the finishing touches on its Christmas show.

This year, though, any last-minute polishing of the harmonizing will come not in rehearsals but on the computer, where longtime director Mike Wallen is spearheading the effort to piece together video of past performances, along with three additional holiday songs that feature parts recorded by members at home and then are merged into a seamless piece.

It’s not a simple process to stitch everything together, and it’s certainly not Wallen’s preferred musical method of ringing in the holidays. But he wasn’t about to miss another Christmas after last year’s program was canceled because of the pandemic.

“We desperately missed singing for our audience,” Wallen said.

By this past September, when the chorus hadn’t been able to resume in-person rehearsals, it became clear that producing a live show for Christmas wasn’t going to be possible, so the Virginians moved to Plan B: a free “virtual show.” ”Home for Christmas” will debut on Facebook and YouTube at 8 p.m. Saturday and then will remain available for viewing.

COVID-19 has made things challenging for the chorus for going on two years now; its last live, full-chorus performance was its Christmas show in December 2019. In-person rehearsals stopped in March 2020, but the chorus stayed connected — and kept its camaraderie alive — by holding weekly rehearsals via Zoom.

Chorus members were grateful to be able to see one another on Zoom, but its technology isn’t advanced enough to replicate the experience of singing together in the same room.

For a while in the summer, they tried “drive-in” rehearsals, where members sat in their cars in a parking lot at Regency Mall and sang, linked by microphones wired from individual vehicles to a sound board and mixer so members could hear everyone through their car radios or headset.

In September, after plans to get back together at their usual church fellowship hall were scuttled by a resurgence of virus cases in the area, the chorus started meeting for outdoor rehearsals on property at Providence United Methodist Church in Chesterfield County.

Members gathered at a picnic shelter, physically distanced from one another, and sang as Wallen led the group using the bench of a picnic table as a conductor’s stand. They plan to resume meeting indoors again on Tuesday — for fully vaccinated members — at their old rehearsal spot at Bethlehem Baptist Church in Henrico County. They will follow public health guidance in an effort to keep everyone safe, according to an email sent to members.

The long COVID-related interlude came right after a somewhat momentous development for the Virginians: the decision to welcome women into the previously all-male chorus. The local group, founded in 1945 as the “Tobaccoland Chorus,” followed the lead of the national organization, the Barbershop Harmony Society. That group, which has singers worldwide, opened its ranks to women in the fall of 2019.

A few months later, Erin Cook joined the Virginians and attended a few rehearsals before things shut down, and Jan Owen came into the chorus shortly thereafter, just before the Zoom rehearsals began. Four other women have joined in the meantime. The chorus has an active membership of about 50.

The Barbershop Harmony Society welcomed women as part of its “Everyone in Harmony” mission in 2018 — an effort, as the organization says on its website, to better reflect modern society.

Although there are similar organizations for women — Sweet Adelines International and Harmony Incorporated — and men and women have long sung together in mixed barbershop quartets, BHS says it felt compelled to offer opportunities for women in the setting of a larger chorus.

“The Barbershop Harmony Society believes that what we offer — the experience of singing together in harmony — is meaningful to all people, and should therefore be accessible to people in all combinations,” according to the group’s website.

“Its focus on inclusivity ... I just think is the most wonderful healthy mindset,” said Cook, the first woman to have accepted the Virginians’ invitation.

Cook was hardly a stranger. Her husband, Dan, is a member of the Virginians, and she had served as a voice coach for the chorus. Both of her parents were singers, and she’s a third-generation member of Sweet Adelines. She’s loved barbershop harmony for as long as she can remember, which factored into her majoring in music in college and earning a master’s in music education.

While men and women could sing in their own choruses, opportunities to sing together were lacking in barbershop groups. Mixed barbershop has become popular in Europe, she said.

“Singers over here were looking at that, going, ‘We’d like the opportunity to do that.’”

Cook joined the Virginians and was made an associate director of the group. While at some point barbershop arrangements might have to be revised to take advantage of a mixed chorus, Cook said there is “plenty of room” for women’s voices among the harmonies of a previously all-male barbershop. Wallen believes higher female voices will add “beauty and clarity” to the sound.

“When they opened the Virginians to women, it was just something I thought I could do,” said Owen, who already was friends with many of the chorus members. “I knew my husband would be happy I did that.”

The hourlong Christmas program will feature 17 songs, including 14 from past shows and the three that Wallen is piecing together from the individually recorded parts.

One holiday favorite, “I’ll Be Home for Christmas,” will feature an introduction by one of their most remarkable singers that was recorded a few days before he died.

Charlie Negri was not quite 97 when he died on Oct. 9. He was 84 when he auditioned for the Virginians and joined the group, becoming, as he joked to me for a 2019 story, “the shortest and oldest member of the chorus.”

His fellow barbershoppers remembered him more for his “sparkling personality, his wit, his love of singing and his honorable military service to our country,” his friend and fellow singer Hardman Jones told me.

Negri was a first-generation American — his mother immigrated from Switzerland, his father from Italy — who served in World War II and, as an Army private on night patrol in Italy, was seriously wounded in 1944 when enemy fire shredded his left arm below the elbow. Seventy-five years later, all he recalled feeling was fortunate he had survived.

From those days, he also remembered the feeling of hearing Bing Crosby singing “I’ll Be Home for Christmas” a few months earlier while sitting in a muddy foxhole. His emotional rendering of hearing the song come over the radio became a signature at the chorus’ Christmas concerts.

Diagnosed with cancer in September, Negri desperately wanted to be part of this year’s Christmas show, so Wallen visited Negri’s home and recorded Negri telling the story.

Negri’s intro will be the final spoken word in the show, followed by the chorus singing “I’ll Be Home for Christmas,” a virtual production from the chorus members’ contributions that they recorded at their homes and sent to Wallen to be assembled.

“He asked me when it was done, ‘What did you think?’” Wallen recalled Negri asking after recording the intro. “Well, I was all choked up, but when I got my composure, I said, ‘It was perfect.’ ”