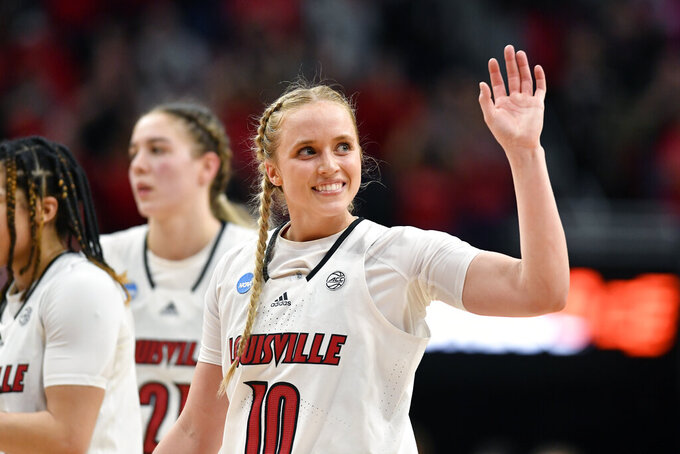 Timothy D. Easley, ASSOCIATED PRESS
FILE - Louisville guard Hailey Van Lith (10) waves to the crowd at the end of a women's NCAA tournament college basketball second-round game against Gonzaga in Louisville, Ky., Sunday, March 20, 2022. Some star women’s players have already decided to stay in school rather than make their earliest possible jump to the WNBA and more are on the way with NIL deals and chartered travel offering appeal compared to rookie salaries and commercial flights in the WNBA. (AP Photo/Timothy D. Easley, File)

Armando Bacot didn’t bolt early from North Carolina after a memorable run to the NCAA championship game to chase a professional playing career. Neither did Gonzaga’s Drew Timme, an All-American star of one of the nation’s top programs.

No, business is already good for men’s and women’s college basketball players able to cash in on their fame now.

The option to remain in school is more enticing than ever since the NCAA permitted college athletes to profit from use of their name, image and likeness in summer 2021.

“It definitely is a factor, definitely something that helped,” said Timme, a two-time Associated Press second-team All-American and a preseason pick this year. “If you look across the landscape of not only college basketball, but all college sports, it’s a big reason a lot of people are inclined to come back."

That’s particularly true on the women’s side, where NIL deals and chartered travel offer more appeal than rookie salaries and much-debated commercial flights in the WNBA.

The women's game has seen stars like Connecticut's Paige Bueckers – who is sidelined this year by a knee injury but will return in 2023-24 – and Iowa State’s Ashley Joens opt to stick around. Other prominent names like Louisville’s Hailey Van Lith and North Carolina’s Deja Kelly soon face choices; they become draft eligible by turning 22 next year.

“If you’re an influencer, especially as a student-athlete in college, and that’s your appeal for NIL, you’re going to want to stay in college because that’s how you’re going to make your money,” Van Lith said. “But I think when it comes to people who are going to pursue professional (playing) careers, I don’t know if it’ll make much of a change.”

Deals have come fast from businesses seeking the most marketable of athletes, many of whom have hired agents to manage those opportunities. College-town businesses have looked for ways to partner with an athletes to tap into local notoriety. National companies have done it with social-media promotions or ads.

Athletes are given wide latitude provided they provide some type of service in exchange for compensation. While deal terms aren’t public, they’re estimated to be in some cases six figures or more – with some of the most well-known athletes even pushing past million-dollar projections.

“The difference in college sports, and we’ve seen this time and again, is: do they follow individuals?” said Columbia University lecturer Joe Favorito, a sports and entertainment marketing consultant. “Kind of. But they really follow the school.

“So there are people investing in Duke or North Carolina or Notre Dame because that’s part of the school. So if you go from St. John’s and transfer to Villanova, does that mean all the brand equity is going to come along with you? Maybe not.”

Favorito added: “That’s the challenge of college athletics. It’s much more about community and the collective than it is about individuals sometimes.”

Yet that also explains why there's value in sticking around to stay tied to the college's brand, especially in the annual spotlight of March Madness.

On the women’s side, Bueckers’ partnerships include Gatorade. Van Lith has deals with adidas, Dick’s Sporting Goods and JCPenney – which led to a back-to-school shopping spree for Louisville-area kids over the summer. Kelly's partnerships include Dunkin' Donuts and Beats By Dre – even presenting her team with custom headphones from the company – and she modeled a Sports Illustrated-themed swimsuit line for retailer Forever 21.

“It’s kind of just taking that (NIL) into consideration as far as I definitely do want to play professionally,” Kelly said. "But it’s just seeing what the best option is as far as what’s going to set me up best successfully, financially in that moment. So I guess we’ll talk about it when the time comes.”

Joens, a preseason AP All-American, returned to Iowa State instead of entering the WNBA draft. While NIL money and chartered flights factored into her decision, the biggest motivator was getting her finishing her graduation requirements this fall.

“It was a long process and I went back and forth,” she said. “I didn’t think about it much last year because you’re focused on the season. I talked to my family a little more and they said what’s more important to you right now? I knew being able to graduate and have a degree was a big.”

Dynamics differ on the men’s side with players eligible for the NBA draft at age 19. There's also the fact that big men who formerly were surefire first-round draft picks have seen their value slide as the pro game evolves to more floor spacing and 3-point shooting.

Neither Bacot nor Timme were considered first-round prospects. Nor was Kentucky big man Oscar Tsheibwe, last year’s AP national men’s player of the year. All three are back in college and making money from NIL partnerships, notably with Timme turning his handlebar mustache into a deal with Dollar Shave Club.

And then there’s Bacot. The 6-foot-11 fourth-year center suffered a bad ankle sprain in the Final Four and limped his way through the NCAA title-game loss to Kansas, so he wouldn't have been healthy enough for NBA pre-draft workouts.

But NIL mattered, too.

The preseason AP all-American's long endorsement list includes local outlets such as having a burger named for him at Town Hall Burger and Beer and helping the local Me Fine organization raise money for families with children suffering a medical crisis.

“Because of the success we had at the end of the year and me, just having a pretty big name in college, it allowed me to leverage that and capitalize on those big opportunities,” Bacot said. “It definitely was something that weighed into coming back.”

And Bacot's not done. Over the summer, he filmed a role in the upcoming season of Netflix’s “Outer Banks,” a teen adventure series set on the coast of the Carolinas.

The only problem? His summer practice schedule interfered with filming dates, prompting him to joke that Netflix was “probably pissed at me” and might write him out of the show.

If he sticks around long enough, he even might get his own IMDB page.

Not a bad haul for sticking around to play for the preseason No. 1-ranked team.

“It allowed me to know I have some security and I had a little money, which is better than having no money,” he quipped. “That’s great.”