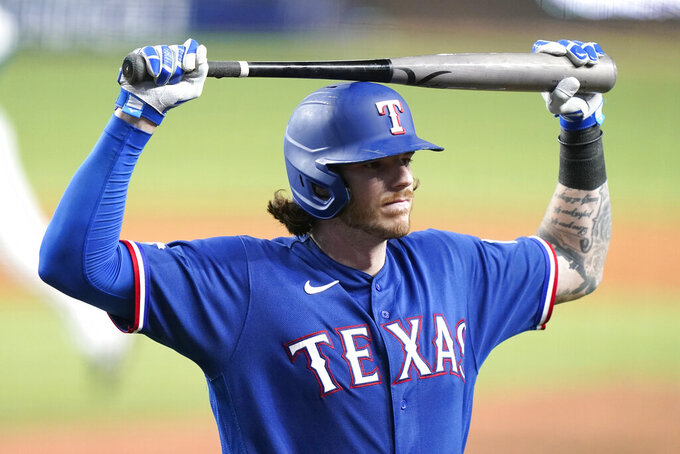 MIAMI (AP) — Rookie Charles Leblanc hit a pair of RBI doubles during an eight-run burst in the fifth inning and the Miami Marlins beat the Texas Rangers 10-6 Monday night for a split of their doubleheader.

Texas won the opener 3-2 as Mark Mathias drew a bases-loaded walk to snap an eighth-inning tie.

The Marlins trailed 3-1 in the nightcap before breaking loose. Leblanc’s double against reliever A.J. Alexy (1-1) got Miami within one before Jon Berti hit a go-ahead, two-run single. Brian Anderson followed with an RBI single and Garrett Cooper hit a two-run double. Nick Fortes added an RBI single and Leblanc capped the outburst with his second double.

“Every ball was hit good in the gap,” Marlins manager Don Mattingly said. “It was much needed. It went good for us today. Guys had good at-bats.”

Leblanc, picked by Miami off waivers from Texas last winter, became the sixth Marlins player with multiple extra-base hits in an inning.

“I have a lot of good relations over there but it’s always good to go back and face those guys,” said Leblanc, who spent six years in the Rangers organization. “It was a really cool experience. I was looking forward to it and I’m glad I was able to perform somewhat well.”

Marcus Semien hit his 22nd home run, tripled and singled and Corey Seager hit his 30th homer for the Rangers.

The Rangers cut a 10-3 deficit on Semien’s two-out RBI triple and Seager’s two-run drive off Bryan Hoening (1-1) in the seventh.

“We couldn’t find our way out of that fifth inning,” Rangers interim manager Tony Beasley said. “We battled back, we fought back and the guys didn’t quit. They continued to fight and give ourselves a chance.”

Starters Jon Gray of Texas and Miami’s Braxton Garrett were activated from the injured list before the second game and neither completed five innings.

Sidelined since Aug. 2 because of a left oblique strain, Gray was on a limited pitch count. He exited after 45 pitches and 3 2/3 innings of one-run ball. He gave up two hits and struck out five.

Rookie Josh Jung’s second homer of the season led off the Texas fifth and made it 1-all.

Garrett gave up two runs, two hits, walked two, struck out four and hit a batter in 4 2/3 innings. An oblique strain had also landed him on the injured list as he missed 23 games.

“I felt great, the sinker was sinking and the slider felt like it was on,”Garrett said. “I was happy to be here.”

Marlins starter Trevor Rogers struck out a season high nine in the first game but the Rangers chased him after they erased a 2-0 deficit with a two-run seventh.

Jonathan Hernández (2-2) pitched 1 2/3 innings. Matt Moore inherited two runners from Hernández in the eighth and retired Miguel Rojas on a groundout. José Leclerc closed with a perfect ninth for his fifth save.

In the seventh of the nightcap, Miami’s JJ Bleday fouled a 2-2 pitch from reliever Jesus Tinoco that bounced off catcher Jonah Helm’s helmet and sailed above his head. Helm rose from his crouch, tracked the ball’s flight and dove to his right and caught it before it hit the ground for the third strike. Bleday flipped his bat in disbelief as he returned to the dugout.

Newly acquired Florida Panthers star wing Matthew Tkachuk threw the ceremonial first pitch before the second game. Tkachuk donned a Marlins jersey with his No. 19. The Panthers obtained Tkachuk in a trade with the Calgary Flames July 22.

The clubs’ original three-game series was set for April 4-6, but the MLB lockout altered the early season schedule. As a result, the games were split into one played on July 21 and Monday’s doubleheader.

Rangers: RHP Spencer Howard (right shoulder impingement) allowed one run and five hits and struck out four in his four-inning rehab start with Triple-A Round Rock on Sunday.

Marlins: After repeated setbacks in his rehabilitation, OF Jorge Soler (low back spasms) will be shut down for the remainder of the season. Soler, the 2021 World Series MVP, joined the Marlins on a three-year, $36 million free agent deal as the club expected him to be one of its top offensive threats. Instead, Soler was limited to 72 games and finished with 13 home runs and 34 RBIs.

Marlins: RHP Sandy Alcantara (12-7, 2.43) will make his sixth start of the season against Philadelphia in the opener of a three-game home set Tuesday. The Phillies will go with LHP Bailey Falter (4-3, 4.02).