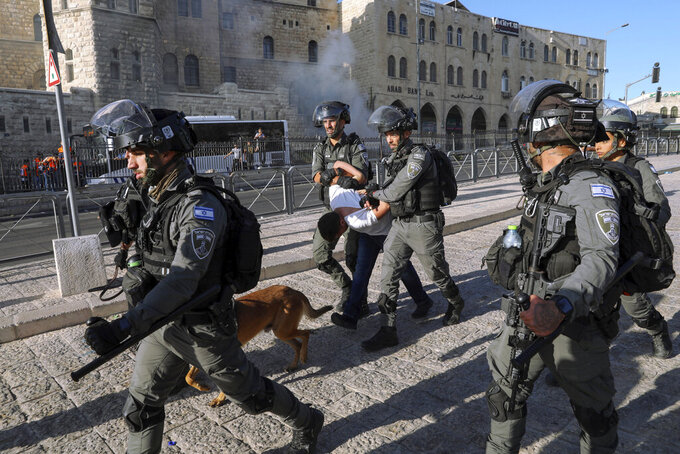 JERUSALEM (AP) — Palestinians clashed with Israeli police at a popular gathering place just outside Jerusalem's Old City as thousands celebrated a Muslim holiday, a repeat of violence earlier this year that eventually led to the 11-day Gaza war in May.

Israeli police said Palestinians hurled rocks at police and public buses near the Damascus Gate leading into the Old City. They said 22 suspects were arrested.

Earlier, thousands of Palestinians had marched along the Old City walls and paused at the gate, where a scout band played the Palestinian national anthem. They continued to the Al-Aqsa mosque, where tens of thousands prayed in honor of the Prophet Muhammad's birthday.

Palestinians say Israeli police moved to restrict the annual gathering in and around Damascus Gate in what they saw as a provocation.

An Associated Press photographer said a few dozen youths began shouting at police and throwing water bottles, after which police fired stun grenades. The Palestinian Red Crescent emergency service said it treated 17 people who were wounded, including 10 who were taken to a hospital.

Palestinians clashed with Israeli police on a nightly basis during the Muslim holy month of Ramadan in April and May over a decision to place police barricades at Damascus Gate, a popular holiday gathering spot for Palestinians families.

The clashes continued even after the barricades were removed and eventually spread to the nearby Al-Aqsa mosque compound, a flashpoint site sacred to Muslims and Jews. The violence, along with efforts by settlers to evict dozens of Palestinian families from their homes, eventually ignited the fourth war between Israel and the militant Hamas group ruling Gaza.

The Old City is in east Jerusalem, which Israel captured in the 1967 war and annexed in a move not recognized internationally. Israel considers the entire city its capital, while the Palestinians want east Jerusalem to be the capital of their future state.

The Al-Aqsa mosque compound is the third holiest site in Islam and the holiest for Jews, who refer to it as the Temple Mount because it was the location of the Jewish temples in antiquity.