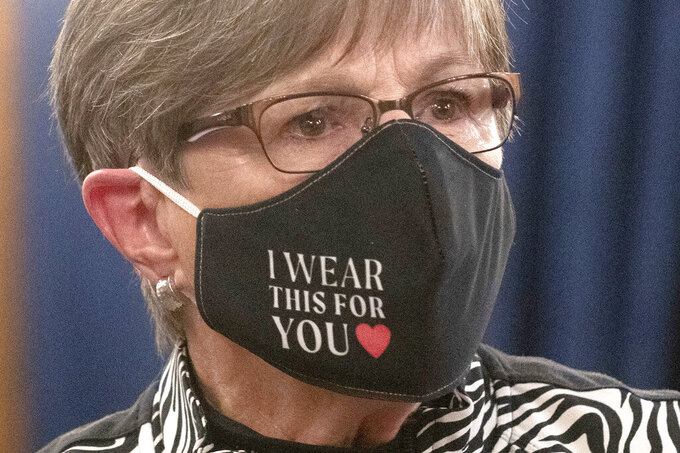 TOPEKA, Kan. (AP) — Democratic Gov. Laura Kelly on Friday recommended that nearly everyone inside K-12 schools or riding school buses in Kansas be required to wear a mask, and Kansas State University will require masks in its buildings, whether people are vaccinated against COVID-19 or not.

Kelly's office issued updated guidance for elementary, middle and high schools in response to a surge in new COVID-19 cases over the past five weeks tied to the more contagious delta variant. She also is citing revised recommendations on masks from the U.S. Centers for Disease Control and Prevention.

“We know our children belong in the classroom, but it’s critical that we provide Kansas school districts with support and tools they need to keep our kids safe,” Kelly said in a statement.

Kelly earlier this week issued a mask mandate for state government workers and visitors to state buildings in most of Kansas' 105 counties.

Kansas State cited that order and the CDC's new guidance on masks in announcing its mandate for people to wear masks indoors when not alone. It takes effect Monday on Kansas State's main campus in Manhattan, its Polytechnic Campus in Salina and its satellite campus in Olathe.

Kansas State University enacted its mandate two days after the University of Kansas said it was recommending that everyone wear masks indoors.

The governor closed all K-12 school buildings for two months early in the pandemic and later attempted to impose a statewide mask mandate. But she said this week during a Statehouse news conference that decisions now about masks will be left to the State Board of Education and local school boards.

Republicans have strongly criticized Kelly over the new mask mandate for state employees.

“Vaccines are widely available for those who want them,” said Senate President Ty Masterson, an Andover Republican. “Government needs to stop telling people how to live; rather, it is time for government to trust the people they serve.”

The CDC reported Friday that nearly 55% of the state's 2.9 million residents aren't fully vaccinated, including children under 12, who can't get inoculations. The national figure is just over 50%; it's less than 40% in five New England states.

Delta variant cases are doubling every two weeks in Kansas, with 1,653 confirmed as of Friday, according to state data. Kansas averaged 809 new cases a day for the seven days ending Friday, the highest average since early February.