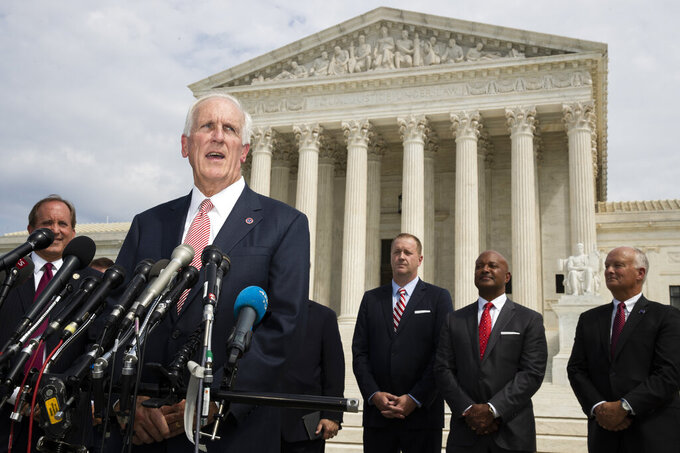 Manuel Balce Ceneta, ASSOCIATED PRESS
FILE - In this Sept. 9, 2019 file photo, Tennessee Attorney General Herbert Slatery, with a bipartisan group of state attorneys general speaks to reporters in front of the U.S. Supreme Court in Washington. Slatery, the first Republican to hold the office since Reconstruction, says he won't seek another eight-year term as the state's top legal counsel. Slatery, 70, announced his decision Tuesday, May 10, 2022 in a letter to the Tennessee Supreme Court, which was provided to The Associated Press by request. (AP Photo/Manuel Balce Ceneta, File)

NASHVILLE, Tenn. (AP) — Tennessee Attorney General Herbert Slatery, the first Republican to hold the office since Reconstruction, says he will not seek another eight-year term as the state's top legal counsel.

Slatery, 70, announced his decision Tuesday in a letter to the Tennessee Supreme Court, which was provided to The Associated Press by request.

“Words are inadequate to express the honor I have had to be the attorney general and reporter for our great state,” he wrote in his brief two paragraph note to the high court. “Similarly, I am unable to express the extent of my gratitude for the trust the Court showed in appointing me.”

Tennessee is the only state in the U.S. where the state's Supreme Court appoints the attorney general. The court's justices selected Slatery in 2014 after he previously served as former Republican Gov. Bill Haslam’s chief legal counsel.

As attorney general, Slatery has defended the state in court as it resumed executions, since becoming among the top states to carry out death sentences. He's also been involved in the national investigation into opioid manufacturers, including cases again Purdue Pharma.

In 2016, Slatery launched an investigation into former Republican Rep. Jeremy Durham amid sexual harassment allegations. Slatery's investigation detailed allegations of improper sexual contact with at least 22 women during his four years in office. After releasing the preliminary findings, Durham was later ousted by state House members.

Late last year, Slatery blasted a proposed ballot initiative that would have required the attorney general be confirmed by state lawmakers after the current process of selection by the state Supreme Court. According to Slatery, it “would be a shame” to make the position a “political office.” The proposal later died a few months later in the House.

Gov. Bill Lee praised Slatery as being “recognized as the best (attorney general) in the country.”

“Tennesseans know him as a tireless fighter for justice amidst the opioid crisis,” Lee tweeted Tuesday evening. “Thank you, General and job well done."

Democratic Sen. Jeff Yarbro, the chamber's minority leader, on Wednesday accused Slatery of transforming the attorney general role in Tennessee as “overtly political and more overtly partisan" over the past eight year.

“He wasn’t just a Republican who was appointed Attorney General, but rather a Republican Attorney General,” Yarbro said in a statement. “In some ways, it’s hard to compare his performance to past attorneys general, because he clearly conceived of the job so differently than his predecessors.”