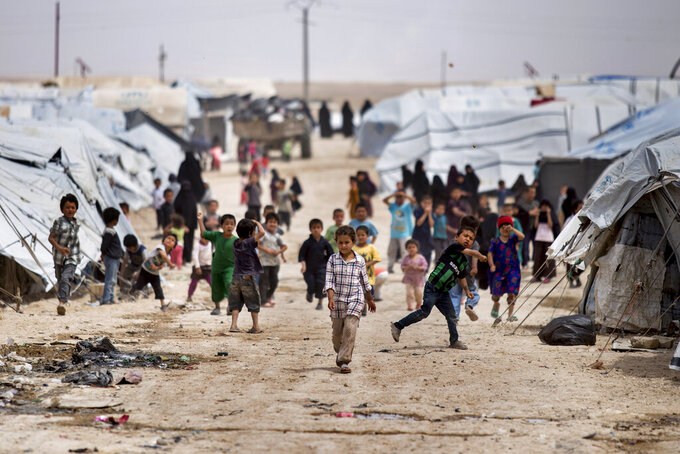 Baderkhan Ahmad, ASSOCIATED PRESS
Children gather outside their tents, at al-Hol camp, which houses families of members of the Islamic State group, in Hasakeh province, Syria, May 1, 2021. Belgium judicial authorities said on Tuesday, June 21, 2022 they have repatriated 16 children and six mothers of Belgian citizenship who were held in Syria for their suspected connection with the Islamic State group. (AP Photo/Baderkhan Ahmad, File)

BRUSSELS (AP) — Belgium's judicial authorities said on Tuesday they have repatriated six women of Belgian citizenship who were held in a Syrian detention camp for foreigners affiliated with Islamic State group extremists, along with 16 children.

The federal prosecutor's office said it's the second repatriation operation of this kind after the one that took place in July 2021, when Belgian authorities took back six mothers and 10 children.

Federal prosecutor Frederic Van Leeuw told a news conference that the children were born between 2010 and 2019 and were immediately separated from their mothers upon arrival at the Melsbroek Air Base.

“Among them is an orphan of a Belgian father," he said. “These children were immediately taken into care by the competent youth services and prosecutors."

The transfer from Syria was made possible by a decision last year by the Belgian governement to allow the return of mothers who clearly expressed the wish to return, and who have clearly distanced themselves from extremist ideology.

Van Leeuw said DNA tests were carried out to properly identify the link between the mothers and the children who returned Tuesday.

All the women on the latest flight have been given sentences in Belgium of up to five years in jail and were arrested upon arrival. Their children will remain under medical observation for a while.

“Then, an appropriate framework will be put in place on a case-by-case basis," Van Leeuw said. “Everyone will understand that it is important to respect the privacy of children and those around them, so that ... their integration can take place in all serenity.”

Federal police commissioner Marc De Mesmaeker said the children were escorted to Belgium in “the best possible way." He said they were accompanied by people speaking their language throughout the stressful journey and were given food, clothes and toys.

Van Leeuw said the repatriation operation, which was carried out in cooperation with local authorities, took place in the Roj Camp in northeast Syria. It is home to some 2,500 women and children.

Van Leeuw said there are a few Belgian women left in Syria, but not in the Roj camp. He estimated that between 10 and 15 Belgian men are in prison in the country. Belgium is not trying to bring them back home.

Under the Belgian doctrine, returning children home is being done for humanitarian reasons. But repatriation operations of women are also as a matter of national security since it's easier to monitor people who have spent time in Syria when they are on home soil.

Since the war in Syria began in 2011, several hundred Belgians have traveled to conflict zones in Iraq and Syria to join terror groups, Belgium has also been hit by several terror attacks in the past decade, including suicide bombings in 2016 that killed 32 people and wounded hundreds more in the Brussels subway and airport.