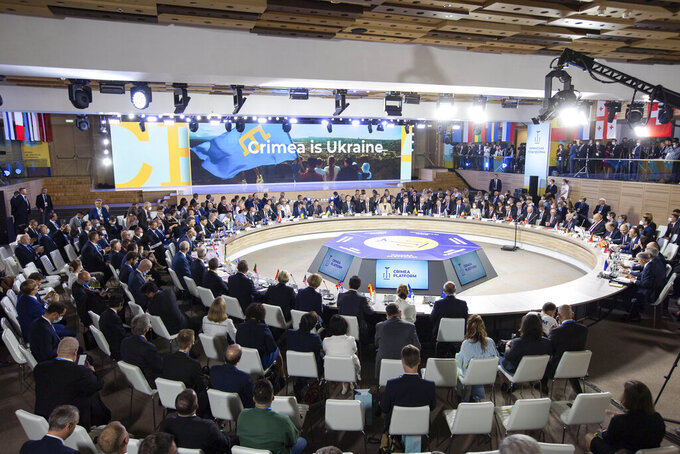 Uncredited, ASSOCIATED PRESS
High ranking officials attend the Crimea Platform summit in Kyiv, Ukraine, Monday, Aug. 23, 2021. The Crimean Platform, an international summit called by Ukraine to build up pressure on Russia over the annexation that has been denounced as illegal by most of the world, opened in Kyiv on Monday. (Ukrainian Presidential Press Office via AP) 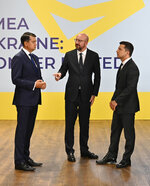 KYIV, Ukraine (AP) — Ukraine's president on Monday vowed to do all he can to bring back the peninsula of Crimea, annexed by Russia seven years ago, and urged international allies to support the effort.

President Volodymyr Zelenskyy spoke at the Crimean Platform summit, called by Ukraine to build up pressure on Russia over the 2014 annexation that has been denounced as illegal by most of the world. Russia's relations with the West have sunk to post-Cold War lows as a result.

In his opening remarks, Zelenskyy promised to "do everything possible to return Crimea, so that Crimea, together with Ukraine, becomes part of Europe.”

“For this we will use all possible political, legal and first and foremost diplomatic means," Zelenskyy said, adding that Kyiv needs “effective support at the international level.”

Top officials from 46 countries and blocs took part in the summit, including from the United States, the European Union and Turkey. Kremlin spokesman Dmitry Peskov denounced the summit as an “anti-Russian event.”

Zelenskyy charged that Russia has turned Crimea into a “military base" and "a foothold for Russia to boost its influence on the Black Sea region.” He said Moscow has tripled its military presence in Crimea.

In April, Russia increased troops near its borders with Ukraine, including in Crimea, eliciting international outrage.

On June 23, Russia said one of its warships in the Black Sea fired warning shots and a warplane dropped bombs in the path of the HMS Defender, a British Royal Navy destroyer, to chase it away from an area near Crimea that Moscow claims as its territorial waters. Britain, which like most other nations didn’t recognize the annexation of Crimea, insisted the Defender wasn’t fired upon and said it was sailing in Ukrainian waters.

All 30 NATO member states were represented at the summit.

“Occupation of Crimea casts doubts on the effectiveness of the entire international security system,” Ukraine's president said. “Without restoring the trust in it, not a single state can be sure that it wouldn't become the next victim of occupation.”

The summit was opened by a Ukrainian singer of Crimean Tatar descent, Susana Dzhamaladinova, known as Jamala. In 2016, Jamala won the Eurovision song contest with a song about the 1944 mass deportation of Crimean Tatars on Soviet dictator Josef Stalin’s order. Leaders of the Crimean Tatar community attended the summit.

“We need to show the world that ethnocide of Crimean Tatars continues in Crimea,” Jamala told The Associated Press. “People in the world should know that we're barred from congregating even for honoring our ancestors.”

Ethnic Russians, who form a majority of Crimea’s 2.3 million people, widely supported the Russian annexation, but Crimean Tatars, who accounted for nearly 15%, opposed it. An estimated 30,000 Crimean Tatars have fled Crimea since 2014.

Some who stayed have faced a crackdown by Russian authorities, who banned the Crimean Tatars’ main representative body and some religious groups. About 80 Crimean Tatars have been convicted and 15 activists have gone missing, according to Amnesty International.

“My people have once again found themselves under the rule of an occupation regime, which in many aspects is even worse than the Soviet one,” Mustafa Jemilev, leader of the Crimean Tatar community, said at the summit. “This forum is a ray of hope about a peaceful de-occupation for my compatriots.”

Top Western officials at the summit relayed messages of support for Ukraine. "Ukraine will never be alone in that Crimea is Ukraine," EU Council President Charles Michel said. "Unfortunately, Russia continues to act in ways that multiply the negative impact of the annexation. The continued militarization of the peninsula heavily affects the security situation in the Black Sea region."

The summit aims at bringing the issue of Crimea back into the global spotlight, said Volodymyr Fesenko, Ukrainian political analyst with the Penta Center think tank.

“Ukraine wants to make Russia nervous and bring the Crimea card to the international negotiating table,” Fesenko told the AP. “Kyiv reminds both Russia and its international partners about the price Russia should pay for Crimea.”

Participants of the summit signed a joint declaration, which, Zelenskyy said in his closing remarks, “clearly stipulates the non-recognition of Russia's illegal annexation of Crimea and contains commitments to consider imposing additional political and diplomatic sanctions on Russia in the case of further aggression.”