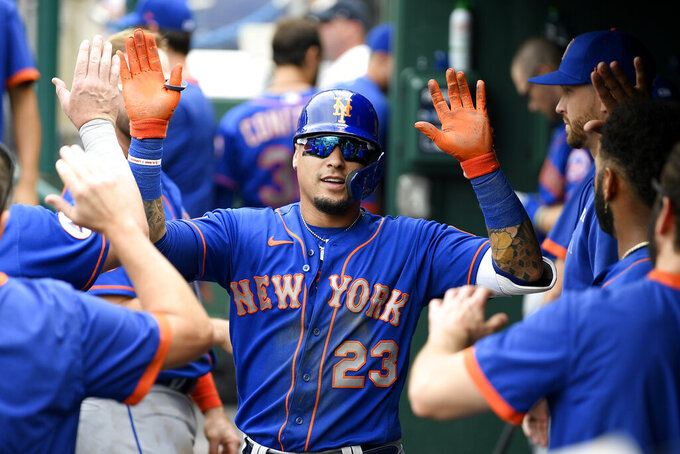 Nick Wass, ASSOCIATED PRESS
FILE - New York Mets' Javier Baez celebrates his home run in the dugout during the third inning of a baseball game against the Washington Nationals, Sunday, Sept. 5, 2021, in Washington. Javier Baez is nearing a $140 million, six-year contract with Detroit, giving the Tigers a dynamic bat for the middle of their order. Baez, who turns 29 on Wednesday, hit .265 with 31 homers and 87 RBIs in 138 games with the Cubs and Mets last season. A person with direct knowledge of the situation confirmed the deal to The Associated Press on Tuesday, Nov. 30, on condition of anonymity because the contract had not been finalized. (AP Photo/Nick Wass, File)

NEW YORK (AP) — Javier Báez agreed to bring his high motor to the Motor City, while other teams around the majors raced to finish up business before Tuesday's deadline to tender contracts and a likely roster freeze coming when baseball's collective bargaining agreement expires Wednesday.

Meanwhile, 41 players were not tendered contracts and became free agents, including fan-favorite Brewers slugger Dan Vogelbach and Mets pitcher Robert Gsellman. The deadline for teams to offer contracts to players with less than six years of major league service was 8 p.m. Tuesday.

The biggest deal of the day went to Báez, a free agent infielder who agreed to a $140 million, six-year contract with Detroit, giving the Tigers a dynamic bat for the middle of their order.

The Chicago White Sox fortified their bullpen by signing right-hander Kendall Graveman to a $24 million, three-year deal, and Miami completed a $56 million, five-year contract to keep right-hander Sandy Alcantara in the rotation for years to come. The Marlins also acquired All-Star infielder Joey Wendle from the Tampa Bay Rays for a minor league outfielder.

The flurry pushed spending in recent days to more than $1.6 billion before what likely will be Major League Baseball's first work stoppage since 1995. The five-year collective bargaining agreement expires at 11:59 p.m. EST Wednesday, and owners are expected to lock out the players if the sides can’t reach a new labor deal in time.

“The last few weeks have been as active of a November as we’ve ever experienced," Rays president of baseball operations Erik Neander said. "It’s been a lot of fun. My personal opinion is that we don’t need three, four months of winter to drag it out to figure out what we need to do.

“The CBA that is expiring, that uncertainty is something that I think is fair to say contributed to a lot of the activity we’ve seen across the game the last few weeks. I think actually it’s been great for the game to see that much activity in the early going here.”

Báez, who turns 29 on Wednesday, hit .265 with 31 homers and 87 RBIs in 138 games with the Cubs and Mets this season. The move to Detroit likely puts him back at shortstop after he finished the year at second base while playing alongside good friend Francisco Lindor in New York.

The contract is pending a physical, according to a person with direct knowledge of the situation who spoke Tuesday to The Associated Press on condition of anonymity because the deal had not been finalized.

The Mets completed a $78 million, four-year contract with center fielder Starling Marte and a $26.5 million, two-year deal with outfielder Mark Canha that includes a club option for 2024.

The Giants agreed with right-hander Alex Cobb on a $20 million, two-year contract with a $10 million club option for 2024 that includes a $2 million buyout.

Houston signed reliever Héctor Neris to a $17 million, two-year deal with an option for 2024, and reliever Daniel Hudson joined the Los Angeles Dodgers on a one-year contract.

The Pittsburgh Pirates agreed with free agent catcher Roberto Pérez on a $5 million, one-year deal, replacing Gold Glove catcher Jacob Stallings a day after trading him to Miami. The Cubs also added a backstop, agreeing with Yan Gomes on a $13 million, two-year deal. Both contracts were confirmed by people to the AP on condition of anonymity because they had not been announced.

The Los Angeles Angels agreed on a $6.75 million, one-year deal with right-hander Michael Lorenzen, who also played outfield for Cincinnati in recent seasons. He could give LA a second two-way player alongside Shohei Ohtani.

More than 30 players agreed to contracts in the hours before the deadline for teams to offer deals to unsigned players on their 40-man rosters.

Colorado reliever Daniel Bard agreed at $4.4 million after saving a career-best 20 games for the Rockies, and Colorado right-hander Tyler Kinley got $1,025,000.

The Orioles also signed second baseman Rougned Odor to a one-year deal. Odor, who spent last season with the Yankees, has a $12 million salary for 2022, and the Texas Rangers are responsible for all but next year’s minimum. Texas is also responsible for a $3 million buyout of his 2023 option. Odor played seven seasons with the Rangers before joining the Yankees

The current minimum salary is $570,500, but that could change in the next collective bargaining agreement.